Why Prodigal Son is a Must-Watch Show

Allison Brennan peels back the layers of FOX's new serial killer show Prodigal Son. Plus, comment on the post for a chance to win Allison's new thriller The Third to Die!

A year ago, I saw the trailer for Prodigal Son, a new series on FOX, and loved the premise: the son of a serial killer becomes a profiler while battling his own demons and missing memories. It was one of those ideas I wish I’d thought of.

But as we all know, great ideas can fall flat with poor characters or lackluster writing. And in crime fiction—and the plethora of crime fiction television shows—character is doubly important. Virtually every crime scenario has been done. So if you don’t care about the characters and their story arc, it’s just ho-hum.

All the acting is strong in Prodigal Son—I mean, the amazing Lou Diamond Phillips has a supporting role. He gives the show gravitas and confidence. But the show is mostly about Malcolm Bright (played by Tom Payne, from The Walking Dead) and his father, Dr. Martin Whitly (Michael Sheen) a notorious serial killer called “The Surgeon” who went to prison after a young Malcolm called the police on his father.

Fast-forward 21 years. Malcolm, an FBI profiler, is fired by the FBI but by the end of Episode 1 is consulting with the NYPD and Detective Gil Arroyo (Phillips)—the cop who arrested Dr. Whitly.

Honestly, most of the “crimes of the week” are interesting, but not all that original (though the storylines get stronger as the season progresses.) What is original, or at least done well by Payne, is the complexity of Malcolm Bright, his character. He’s in therapy, he has hand tremors, he has night terrors, and he can barely take care of himself. On the flip-side, he’s brilliant, he sees things other people miss, he has an acute understanding of human nature, and he can profile anyone (which makes for a wonderfully tense and uncomfortable scene when he’s goaded into profiling his date.) He uses sarcasm and self-deprecating humor to hide pain and sorrow. His relationships with his mother and his younger sister feel real and just as complex. These are three people who had their world changed forever when they learned that their spouse/father had killed at least twenty-three people. How they each deal with it feels authentic and the conflict—both internal and external—is deep and compelling.

See Also: 5 New Crime Shows You Need to Check Out!

As a writer, I don’t particularly like writing blood and gore. It’s in my books by necessity—at the crime scene, or because I’m in the killer’s POV—but the violence is secondary. The important thing for me is how the characters react to the crime. How the killer reacts (Why does he do what he does? How does it affect him?); how the survivors react (grief, anger, something else?); how the cops react. Showing the impact of violence more than the violence itself makes a far more compelling book—and television series. And in Prodigal Son, they do this extremely well:

The supporting cast of characters—cop Dani in particular—are strong and necessary, but they are still a supporting cast. This show is about Malcolm Bright and how his father’s legacy has shaped him—and continues to shape him.

Michael Sheen as Dr. Martin Whitly doesn’t get much screen time, but when he does, he shines. At first, you can’t imagine that he was guilty of the horrific crimes of which he was convicted. But as time goes on, you see the arrogance and cunning and intelligence. He’s a superb actor who ups the level of the show even when he’s not on screen. Just the hint of his presence is enough.

An aside about Malcolm’s mother Jessica and sister Ainsley. I didn’t really care much for the characters at the beginning, but they both proved to be more interesting and complex as the show went on. And while I don’t agree with all the decisions Jessica has made, I understand why she’s made them—and that is ultimately the sign of great writing and acting.

Read an Excerpt from The Third to Die!

I’ve also been watching Evil, another new series. While Evil has a different premise (proving or disproving demonic possessions or miracles) it has similar dark themes. Evil is smoother, seems more in control, and the acting is just as strong. But for me, Evil almost feels too planned and predictable. And while I like the characters, especially Mike Colter as seminarian David Acosta, I don’t love them (or hate them.) What Prodigal Son did was give me a cast of complex, flawed characters living under the shadow of a notorious serial killer. Yes, Prodigal Son is a bit over-the-top at times, but in some ways, that’s why I love it.

Prodigal Son ranked in the middle of the fall premieres—not a stand out success, but not a failure by any means. Critical reviews were poor, but I don’t really listen to critics much. In fact, many of the movies I saw last year had poor critical commentary, but fans loved them (Star Wars was great, critics panned it.) FOX ordered a full season after only a couple of shows, so that bodes well. The slightly rocky beginning smoothed out, but I liked it from Episode 1, and it’s exponentially better by the mid-season finale. It’s my favorite new show of the season. 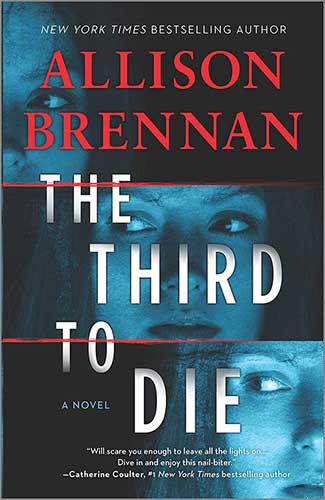 About The Third to Die:

An edgy female police detective… An ambitious FBI special agent. Together they are at the heart of the ticking-clock investigation for a psychopathic serial killer.

Detective Kara Quinn, on leave from the LAPD, is on an early morning jog in her hometown of Liberty Lake when she comes upon the body of a young nurse. The manner of death shows a pattern of highly controlled rage. Meanwhile in DC, FBI special agent Mathias Costa is staffing his newly minted Mobile Response Team. Word reaches Matt that the Liberty Lake murder fits the profile of the compulsive Triple Killer. It will be the first case for the MRT. This time they have a chance to stop this zealous if elusive killer before he strikes again. But only if they can figure out who he is and where he is hiding before he disappears for another three years. The stakes are higher than ever before, because if they fail, one of their own will be next…

Comment below for a chance to win a copy of The Third to Die by Allison Brennan!

The Third to Die Comment Sweepstakes: NO PURCHASE NECESSARY TO ENTER OR WIN.  A purchase does not improve your chances of winning.  Sweepstakes open to legal residents of 50 United States, D.C., and Canada (excluding Quebec), who are 18 years or older as of the date of entry.  To enter, complete the “Post a Comment” entry at https://www.criminalelement.com/why-prodigal-son-is-a-must-watch-show/ beginning at 11:00 a.m. Eastern Time (ET) January 30, 2020. Sweepstakes ends at 10:59 a.m. ET February 13, 2020. Void outside the United States and Canada and where prohibited by law. Sponsor: Macmillan, 120 Broadway, New York, NY 10010.