Where I Left Her by Amber Garza: New Excerpt

August 16, 2021
From Amber Garza, the author of When I Was You, comes Where I Left Her, a spine-tingling new thriller about a mother's worst nightmare come true, when her teenage daughter goes to a sleepover and doesn't come back. Read on for an excerpt! 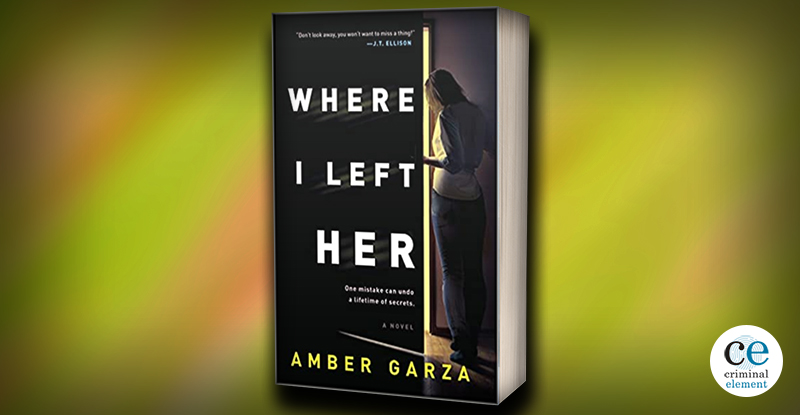 Whitney had been up for hours, and still hadn’t heard from Amelia. Last night was restful. Quiet. Peaceful. All the things Whitney had wanted it to be. Much needed. But this morning she was suffering from a serious case of mom guilt. She missed her daughter. Was anxious for her to come home, attitude and all. Unlocking her phone, she shot her a quick text: Ready for me to pick you up?

Even after several minutes, no response came. Not that she was shocked. When Amelia had friends over, they stayed up all night giggling and talking. No matter how many times Whit­ney would remind them to keep it down, within minutes their muffled voices would return, drifting through the adjoining bedroom wall. Most likely, she’d done the same at Lauren’s and they were both still asleep.

With slick fingertips, Whitney closed out of Snapchat and checked Instagram. Nothing there either. A chill brushed over her neck, causing the hairs to stand on end. She shook the feel­ing away with an abrupt jerk of her head. Whitney had always been like this. Anxious. A worrier, especially when it came to Amelia. Perpetually thinking the worst. Amelia hated it. So had her ex-husband. It was one of the many things they fought about. And it was probably one of many reasons why Dan had ended up marrying that sunny, smiling, high-pitched preschool teacher. If Whitney had to take a guess, she’d say there were no skeletons in Miss Karen’s closet. No past indiscretions she was afraid of coming to light. No monsters from her past lurking around the corner.

No secret buried inside, so deep the roots had become in­visible.

It was 10:30 now. There were a million things on the agenda today and waiting around for Amelia wasn’t one of them.

After hitting the grocery store and Target, Whitney swung by Lauren’s, using the memory of how they’d gotten there yes­terday as her guide. It was a little tricky, since she hadn’t paid enough attention to Amelia’s directions yesterday, but after a few minutes of circling the neighborhood, she came upon a fa­miliar street and turned on it. A couple of houses in, she recog­nized the rosebushes.

It had been well over an hour since she’d sent the last text to Amelia. Although there hadn’t been any response yet, Whit­ney was sure she was up by now. Probably hoping to buy more time with her friend.

Whitney had gotten Amelia a bag of gummy worms. She pulled it out of one of the grocery bags. It crinkled as she set it on the passenger seat. Amelia probably wouldn’t even eat them. Certainly, they didn’t fit within the parameters of her latest diet, but, still, Whitney couldn’t resist. Whitney’s habit of picking up treats at the store had started back when Amelia was a toddler, when she’d surprised her with a bag of cookies one afternoon when picking her up from preschool. Whitney would never for­get how wide Amelia’s eyes got, how broad her smile became as she clutched the little bag. A lot of things may have changed between them over the past few years, but Whitney didn’t want that to be one of them.

After getting out of the car, she slipped the key ring around her finger and walked up the front walkway, flip-flops slapping on the pavement. It was a warm, spring day. Kids played outside a few houses down. A lawnmower kicked on. A couple rode their bikes past, bright neon helmets bouncing up and down like beach balls bobbing in the waves. Amelia used to love to ride bikes. For a while, it had been a weekend tradition. Whitney couldn’t remember the last time they’d hit the trails together, but she made a note to ask her about it. Most likely her answer would be a big resounding no, coupled with the same cringey, horrified look she had whenever Whitney suggested they hang out. Still, it was worth a shot. Sometimes Amelia surprised her with a yes, reminding Whitney of the girl she used to be before the teenage monster took over.

When Whitney reached the door, she lifted her hand to knock the same way she’d watched Amelia do the day before. A min­ute passed and no one answered. That funny feeling returned, but she shoved it down, feeling silly.

She knocked again, this time so hard it stung her knuckles. The girls were probably listening to music or something. Or maybe they were in the backyard. It was a nice day. Ears perked, she listened for the sound of her daughter’s voice or of music playing inside. Hearing neither of those, she frowned.

Finally, Whitney caught the hint of footsteps inside.

The door creaked open, an older woman peering out, eye­brows raised. She looked to be in her late sixties, maybe early seventies.

Whitney was taken aback. She’d never met Lauren’s mom, but there was no way this was her. Maybe Lauren’s grandpar­ents lived with them. Recently, Whitney had watched a news report about how the cost of living had gone up, causing mul­tigenerational homes to become a growing trend. And Lauren had mentioned that her parents were divorced. Whitney knew firsthand how financially taxing it was to raise a child alone.

But the elderly woman just stared at it, not saying a word. She glanced over her shoulder where a man around her same age stood. He furrowed his brows and stepped forward. Whit­ney’s body tensed.

Maybe she’s got dementia or Alzheimer’s or something. Whitney caught the old man’s eyes. “Hi, I’m Amelia’s mom. She spent the night here.”

“Nope. Not here.” Shaking his head, he came closer. “You must have the wrong house. They all kinda look the same in this neighborhood.”

Whitney glanced around. Hadn’t she thought the same thing yesterday? She must’ve turned down the wrong street or some­thing.

Face warming, she backed away from the door. “I’m so sorry to have bothered you.”

“No bother at all,” the man said, and the woman offered a kind smile.

Whitney turned on her heels and made her way back to the car. She turned on the ignition and pulled away from the curb. The couple had already disappeared inside. Whitney drove to the main street and turned right. When she came up on another street, she turned onto it. The man was right. There were lots of houses that looked like theirs. She pulled up in front of one, scanning the yard.

That’s what had set the other house apart. The one she dropped Amelia off at.

She moved farther down the street, carefully looking to the right and to the left, searching for a one-story house, roses lin­ing the perimeter. Coming up empty, she swung the car around. Maybe her mistake had been turning right at the main street.

This street was almost identical to the other two she’d just been down. Same tract homes. Manicured lawns. Shuttered windows. A sea of tan paint and white trim. The odd red door or colorful lawn art. But, again, no roses. At least, not in the correct spot.

Turning onto another street, she finally found it. The simple house. The roses lining the side.

After parking in front, she leaped out and hurried to the front door. It was answered after only a couple of knocks.

She gasped, taking in the elderly man standing in the door­way. The same one she’d just spoken to a few moments ago.

She’d ended up right back where she’d started. As she backed away from the door, apologizing profusely, she took in the shut­tered windows, the manicured lawn, the roses lining the perim­eter of the yard. Peering back at her car, she envisioned Amelia in the front seat holding her phone, the voice of the GPS speak­ing in her palm.

There was almost no doubt in Whitney’s mind—this was where she’d left her.