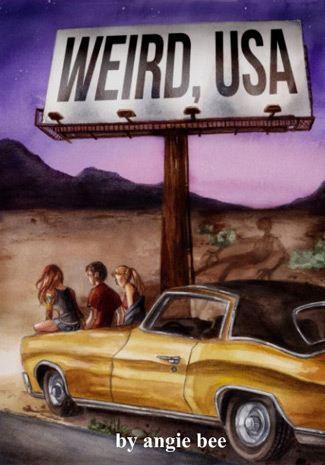 Weird, USA by Angie Bee is part adventure, part crime, and a whole lot of fun.

Some roads are darker than others…

When the successful nature photographer Harry Hawthorne dies young, he leaves his niece and nephew an unusual inheritance: an adventure. The twins, Charlie and Ben, decide to take a year-long road trip across the country, starting in their home state of Maine and ending in Washington. Joined by their friend Olivia, the Hawthornes intend to journey off the beaten path in search of the strange, silly, and bizarre—just as Uncle Harry would have wanted.

But what starts as a vacation of deferred adulthood, visiting wacky museums and roadside attractions, turns into something much darker—even supernatural. The stories Ben has always loved may be grounded in more truth than anyone suspects. And the truth can be dangerous…

“You know, when we passed the state line and you insisted on handling the directions, I was sorta hoping we’d end up in Atlantic City,” Charlie said, pausing to adjust her backpack.

“Why would you assume that?” Ben countered. “We agreed we were going to avoid the usual tourist traps.”

“Yeah, but I thought you’d cut me some slack, show some mercy, and let me play blackjack and eat chili dogs after forcing me to listen to that dude at the Cryptozoology Museum wax poetic on Bigfoot. …And deal with the creepy crawlies at that ‘spider web farm’. …And sit through the UFO weirdness at that Benny Hill place—”

“The Betty and Barney Hill Archive,” Ben corrected sharply. “They’re only the most famous couple in UFO history.”

“Thought that was Mulder and Scully?” Olivia interjected, doing her best to avoid brushing against tick-bearing leaves. She felt about ticks the way Charlie felt about spiders.

“Okay, whatever,” Charlie said waspishly. “But when I think of New Jersey, I think of three things: mobsters, that awful movie with Zach Braff, and Atlantic City. I don’t think hiking in claustrophobic woods in high summer heat.”

“This is cheaper than a casino.”

“Sure. But you know what casinos have besides overpriced drinks and the stink of desperation? Air conditioners.”

Ben stopped in his tracks and turned to fix his flushed sister with an impassive stare. “Look, I’ll make a deal with you. One night out here, no more complaining, and we’ll go back to the car in the morning and drive straight to Atlantic City for the weekend.”

“Deal,” Charlie said without hesitation, spitting on her palm before holding out her hand.

“I’m not touching that,” said Ben. “We’re not five. Or the Little Rascals.”

Charlie sighed and rubbed her hand on her jeans. “You were a lot more fun at five,” she grumbled, adjusting her backpack again as they resumed their trek.

“Doing okay?” Ben asked, drifting back to keep pace with Olivia as Charlie plowed ahead, kicking at leaves and stomping on twigs to hear the satisfying crunch.

“Yeah, I’m fine,” she assured. “I just haven’t hiked in a while. Or been outside much. Or exercised at all, really,” she laughed ruefully. “Being an art major, you spend most of your time inside hunched over easels, trying not to get high on acetone fumes. Is my nose red?”

“I didn’t want to point it out, but yeah—you’re giving Rudolph a run for his money right now.”

“Damn,” Olivia muttered. “Can we stop for a sec, so I can re-sunscreen my face?”

Ben opened his mouth to call to Charlie to wait, but then thought better of it. The amount of noise she was making, there was no way they’d lose her out here.

“I’ve yet to find a sunscreen that I won’t sweat off after ten minutes,” Olivia said as she lathered the white ointment across her cheeks and forehead. “When I was a kid, I even worried that I was a medical anomaly. That I had extra glands in my cheeks or something. I’ve never heard of anyone having a face that sweats as badly as mine does.” She paused. “Sorry, that’s really gross and TMI.”

Ben shrugged with a grin. “It’s not that gross. I think everybody’s got some weird thing about their bodies. I can crack my toes the way most people crack their fingers.”

“How on Earth did you figure that out?”

Olivia refastened her pack with a smile. “Guess we better catch up with Charlie.”

She laughed. “Yeah, I know. It’s been a couple of years since I was home for Christmas, which is pretty much the only time of the year when I wear pants.”

“Good to know you still have legs.” When she looked over he quickly added, “You know, you could have been hiding a robotic levitation device under those long skirts.”

“Nope,” she smiled, “I’ve only got the robotic arm, and Dr. Bell made me this awesome skin glove for it.”

“I didn’t know you watched Fringe!”

“I’ve got a thing for Joshua Jackson. Remember The Mighty Ducks?”

“Quality movie. Back when Emilio Estevez was still legit.”

A couple minutes passed in silence as they navigated around a fallen, toadstool-covered tree.

“So… What’s the story with this place?” Olivia asked. When he glanced over, she added, “Everything so far has been pretty self-explanatory, and obviously weird, so I was just wondering what makes the Pine Barrens different from any other forest?”

“Ohhh, yeah. It’s one of those mishmash monsters, isn’t it?”

“Head of a horse, body of a kangaroo, legs of a deer, wings of a bat,” Ben listed enthusiastically. “When we were kids, Uncle Harry gave us this book set. I think it was called Unexplained Mysteries—something like that. One of those fifteen-volume encyclopedia series from Time Magazine. One had a drawing of the Jersey Devil that cracked me up. This thing has terrorized the Barrens for over two hundred years, and it looks so ridiculous. Laughable, not scary. Not even remotely in the realm of possibility like some cryptids.”

Olivia bit her lip to keep from grinning at the idea that some cryptids were plausible. From what she remembered of Ben, growing up together, he was an avid reader of Stephen King and a big fan of The X-Files. She should have known he’d end up being more of a Mulder than a Scully.

Speak of the devil—

“And there was an early episode of The X-Files,” he went on blithely, “set here, though the actual Jersey Devil wasn’t in the episode at all. Instead, the plot was all about this feral woman attacking the homeless, which I thought was weak tea compared to the real Devil legends.”

“What are the legends?” Olivia asked with genuine interest. It was nice seeing Ben energetic and excited; the Ben of her memories was always quiet, painfully shy, and could barely speak to her without stammering. She wasn’t sure if this was a side of him she’d never seen before or if he’d just found confidence in the last three years. Maybe he’d finally gotten comfortable in his own skin.

“There are a lot of conflicting stories,” he said earnestly. “In the late 1700’s, not long after the Revolutionary War, a Mrs. Leeds was pregnant with her thirteenth child. Some say she was a witch and the child was the Devil’s, others say she was just really fed up with having kids—”

“Birth control obviously wasn’t big back then,” Ben laughed. “Anyway, she supposedly cursed the baby before she had it, and when she did, it turned into a monster. In some stories, it slaughtered the whole family before flying out the chimney and disappearing into the woods. In others, Mrs. Leeds hid the child in horror, or abandoned it to the elements. And then it disappeared for a century, before popping back up in the early 1900’s. Dozens of people saw it flying around town. It zoomed by a packed trolley. Hoofprints were found on snowy roofs. Dogs started disappearing, and people assumed the Devil was eating them. A cop saw it drinking out of a horse trough and shot at it, but it just flew away. Firefighters even shot it with a high-pressure hose! And then it flew into some power lines in broad daylight—and exploded.”

“Right? Not subtle. Like something you expect to see on MST3K.”

“Yup. Except…” he said dramatically, “folks keep seeing it. Every few years. Hunters and park rangers. People who know what kind of wildlife to expect in the Barrens and are sure this creature is something unknown.”

“And you want to camp out here. All night.”

“And what if you see it? What are you going to do?”

“I’m going to… Hang on…” Ben struggled with his backpack, fumbling with a zipper. “A-ha!”

Olivia had expected him to pull out Granddad Hawthorne’s handgun. Instead, he flourished a—

“You’re gonna take its picture?” she said blandly, staring at the Polaroid camera.

“I think your uncle would be proud,” Olivia said, patting his arm. “…Can you hear Charlie anymore?”

“I know how her brain works,” Ben muttered. “Piss her off enough, and she’ll start yelling—”

A sudden scream sent birds bursting from the trees around them.

Angie Bee is a novelist, freelance writer, and pop culture pundit. She has four tattoos (so far), has lived in the Midwest and New Zealand, wrote a thesis on the socio-political commentary in zombie films, and dreams of one day meeting Guillermo del Toro. Her ultimate goal in life is to be the lady all the neighborhood kids suspect is a witch (but a good witch, who gives out full-sized candy bars every Halloween). By day, she's a page designer for a northern Illinois newspaper.