January 31, 2022
What would happen if your doctor delighted in death, rather than healing? Neil Bradbury, Ph.D. shares the frightening answer to this question as he recounts the story of one Dr. Shipman, whose many patients died in eerily similar ways...

Neil's new book, A Taste for Poison, is a brilliant blend of science and crime, and reveals how eleven notorious poisons affect the body—through the murders in which they were used.

In “The Adventure of the Speckled Band”, Sherlock Holmes laments that “doctors make the greatest criminals.” He noted that, “When a doctor does go wrong, he is the first of criminals. He has nerve and he has knowledge.” Most of us only ever interact with the medical profession when ill or injured. We rely on the physician’s knowledge, training, and skill to heal us. But what if the doctor delights in death? What if the doctor decides to play god, holding a life in their hands, deciding on a whim who should live or die? Depressingly, these are not mere academic questions, but are headlined in newspapers, when doctors use their knowledge to kill rather than cure.

For many elderly patients, passing away in their own homes, quietly during sleep, is viewed as one of the better ways to die. When a person dies at home, their primary care physician signs the death certificate, and the body is released for burial. But for one funeral director, in the town of Hyde, just outside Manchester in England, there seemed to be an alarmingly high number of bodies needing to be collected from one part of town, and all had been patients of one particular doctor. In the home, deceased elderly individuals may be found in bed, or the kitchen, or perhaps at the bottom of the stairs. But Dr. Shipman’s patients all seemed to die in the same way; they were all fully clothed, and sitting upright in a chair. Certainly, over a span of 25 years as a primary care doctor, Shipman had witnessed many of his patients passing away from illness or old age. What no one suspected was that Shipman himself was responsible for the demise of many of his patients. Alarmingly, this was not due to incompetence, but rather to a cold deliberate decision to end his patients’ lives. Moreover, it was not out of some sense of easing pain and suffering, but just because he could. It is estimated that Shipman killed at least 250 of his patients, mostly elderly female patients, by injecting them with diamorphine. With syringe in hand, Shipman casually watched in victims slowly become unconscious and finally stop breathing. He then cavalierly walked away as if nothing had happened.

Morphine is extracted from the opium poppy, and named after Morpheus the Greek god of sleep. A little chemical tinkering converts it to codeine, a non-addictive painkiller, or to diamorphine, a powerful and addictive painkiller. Because diamorphine is so highly addictive, it is only prescribed to patients in the final stages of terminal illness, for whom addiction is not really an issue. Diamorphine targets a particular protein in the brain, and once this has been locked onto by diamorphine, even the most agonizing pain fails to register. Of course, a delightful sense of ecstasy accompanies the pain-killing, which is why it is so addictive. While low doses of morphine are beneficial, large doses suppress breathing, even to the point of causing breathing to stop altogether. As Shipman injected his patients with deadly levels of diamorphine, he knew it would cause death. Shipman also knew that he could revive his patients, if he wanted, and it was this god-like sense of being able to hold a life in the balance, that gave Shipman his sense of euphoria and superiority. Dr, Shipman got away with hundreds of murders between 1971 and 1998, but it was greed that eventually led to his downfall.

Shipman’s last victim was 81-year-old Kathleen Grundy. Though elderly, she was fairly fit and healthy. On 24th June 1998, Shipman went to her home for a routine visit, listening to her heart, measuring blood pressure, and against all good practice, injecting a lethal dose of diamorphine. A few hours later, anxious friends found Mrs. Grundy dead, sitting upright on her sofa as if she had just fallen asleep. Since she was under Dr. Shipman’s care, he was called in to certify death, which he put down to old age; and in so doing was able to cover his tracks. But Shipman now did something different from his hundreds of other murders. He had used an old typewriter to forge Mrs. Grundy’s will, making him the beneficiary of her $500,000 estate. This was a big surprise to Mrs. Grundy’s daughter, who happened to be a lawyer. While Shipman may have been skilled in homicide, his expertise in forging documents was woefully inadequate. He left fingerprints all over the will, and one of the letters on his typewriter was broken, allowing police to pin the crime on him without difficulty. When Mrs. Grundy’s body was disinterred, her system was full of diamorphine. Several other of Shipman’s patients were also exhumed, all with high levels of diamorphine in their bodies. At trial, Shipman was found guilty of 15 counts of murder, and one count of forgery. Shipman was sentenced to life in prison, but was found hanged in his cell January 2004, on the eve of his 58th birthday. 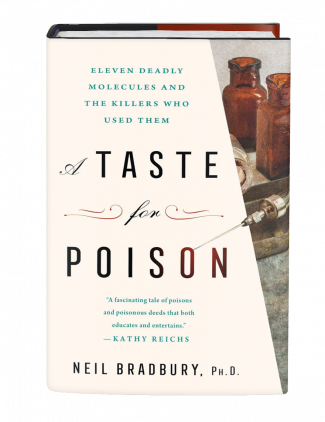 About A Taste for Poison by Neil Bradbury, Ph.D.:

As any reader of murder mysteries can tell you, poison is one of the most enduring—and popular—weapons of choice for a scheming murderer. It can be slipped into a drink, smeared onto the tip of an arrow or the handle of a door, even filtered through the air we breathe. But how exactly do these poisons work to break our bodies down, and what can we learn from the damage they inflict?

In a fascinating blend of popular science, medical history, and true crime, Dr. Neil Bradbury explores this most morbidly captivating method of murder from a cellular level. Alongside real-life accounts of murderers and their crimes—some notorious, some forgotten, some still unsolved—are the equally compelling stories of the poisons involved: eleven molecules of death that work their way through the human body and, paradoxically, illuminate the way in which our bodies function.

Drawn from historical records and current news headlines, A Taste for Poison weaves together the tales of spurned lovers, shady scientists, medical professionals and political assassins to show how the precise systems of the body can be impaired to lethal effect through the use of poison. From the deadly origins of the gin & tonic cocktail to the arsenic-laced wallpaper in Napoleon’s bedroom, A Taste for Poison leads readers on a riveting tour of the intricate, complex systems that keep us alive—or don’t.