Here’s our rewatch of “The Post-Modern Prometheus,” Season 5, episode 5 in the carnival of criminal Monsters-of-the-Week (MOTW).

Chris Carter wrote and directed this one in homage to the 1931 Frankenstein movie by James Whale, and also because he was listening a lot to Cher at the time.

LauraKCurtis: I love the comic book opening.  It tells you what kind of episode this is going to be.  (Well, that and the kid named “Booger.” And the music. And the Jerry Springer show.)

redline_: I really enjoyed Mary Shelley’s Frankenstein when I was in college, so it’s no real surprise that I love this episode.  But the way Chris Carter & Co pulled this one off in black and white deserves to be remembered.

Clare2e: Three boys are going in their junker to a comic book convention! The role of Mrs. B (Shaineh Berkowitz) was originally conceived (no pun) for Rosanne Barr who couldn’t do it, so they got Pattie Tierce, who’s great. She has a touch of sweetness and softness left.  She isn’t just a harpie. And the music by Mark Snow is evocative and haunting, like a calliope chorus of bells.

redline_:The Jerry Springer clips are an excellent touch and also serve to make me nostalgic for the ’90s, when that was one of the trashiest shows around. Now there’s so much competition!

Clare2e: Alone in the house, Shaineh’s watching Jerry Springer about a young wolf boy tragically allergic to shaving cream when things start falling across her windows.  Some vapor-making tablet is left to smoke on the stove. A Cher song gradually makes itself known like a strangely-shaped sihouette entering a woman’s bedroom. Clare2e: In the car, Scully’s reading aloud a letter for help sent to Mulder. A woman became pregnant with her son Izzy 18 years previously after a strange interlude.  More recently, she’s been visited again “He had a really gross face….I got all groggy and conked out for 3 days. Guess what happened when I woke up.” She got Mulder’s name off the TV from a woman with a wolf baby who he went to see.

CMorgan “Scully, do you think it’s too soon to get my own 1-900 number?“ This proves that Mulder isn’t quite as far down the rabbit hole as he lets on.  He knows what he does seems crazy, but he still keeps an open mind.  Either that, or it is all a joke and only he knows the punchline.  Either way, Mulder is awesome. Clare2e: Shaineh’s first pregnancy was odd, but this latest one, after having her tubes tied ”takes the cake.“  Yup.  Also, she has her peanut butter in the fridge.  You don’t have to, you know, and that’s a HUGE jar.  Takes up a lot of shelf space.  Just saying.  Meanwhile Scully notices that the description of the guy with the 2 mouths is just like the comic book character Izzy draws. While Scully’s being condescendingly dismissive, I have to go put some peanut butter sandwiches on a stump and see what turns up.

LauraKCurtis: Ah, the Great Mutato. . .I love how when the kid says it, lightning strikes. The bread with the two bites out of it catty-corner from Mutato’s two mouths—classic.

CMorgan: And now we go see the guy with the amazing eyebrows from Seinfeld.  It keeps getting better. As a fan of Shelley, Karloff, and Gene Wilder, I love the comedic atmosphere of this whole episode.  Can almost hear the “Frau Blücher!” preceding the lightning in the opening and lab scenes. Clare2e: J Peterman (John O’Hurley) is perfect as the mad and righteous scientist. I love how Scully goes toe-to-toe saying she’s a scientist, too.  But that’s not really the issue with understanding the work, is it?  Just because one scientist deeply understands something like, say, organic chemistry, that doesn’t make him or her an automatic expert in vulcanology or astronomy, does it?

CMorgan: And now Scully is a geneticist.  This woman is good.

Clare2e: Of course, I stand corrected. So, 580 billion years of flies.  The heck with monkeys writing Shakespeare.  Shouldn’t flies at least have moved up to haiku by now?  Instead, they’re the same crap-eaters they’ve always been.  It’s like they don’t even care if they evolve…legs out of their mouths.  Scully reassures Mulder that ”no scientist would ever dare“ perform modifications like this on humans. Um, riiiiight…

redline_: As we have cloning and such going on in labs today, genetic engineering is particularly creepy to me, much more so than aliens. I think this is another reason PMP works so well.  It’s one of those episodes that hits close enough to relaity to be truly frightening, unlike the mythology eps (sorry, conspiracy theorists).

LauraKCurtis:Umm…why is Dr. Pollidori’s house beribboned and bedecked with flowers everywhere? And no one thinks that’s odd either.

CMorgan: I want to second Laura’s feelings as to the flowers.  Best guess, it’s Christmas time.

Clare2e: Maybe they’re a necessity because genetic mutations stink like the devil? Or maybe genetic hybridizing also makes lilies that propagate like bathroom mold?  Oh wait, maybe everyone’s just real grateful for his help making mutant babies.  Thanks, Doc!  Wait, is that the falling fumigation tent of sorry-your-husband’s-a-jag-let-me-comfort-you-with-Cher?  There is some Rufies-type action in this episode that’s truly skeevy, even if it’s also funny.

LauraKCurtis: When you look at the people in the diner, you suddenly realize than everyone in this town is outside the normal curve of dimensions.  Either heavy or skinny, super tall or very short.  And then, there’s the bird-woman who works for the newspaper.  It’s not until the end you realize why, but even during the first scene in the diner you know something is off. Clare2e: The phrase that pays? ”Hey, that’s it!  That was the song that was playing when I got knocked up.”  Do they make recordable Hallmark cards with that sentiment? Next, after leaving Casa Berkowitz, we take a quick break for our usual disagreement on the approach.  Scully says it’s nothing.  Mulder says it’s something.  Argue polysyllabically.  Rinse. Repeat. Leave Town.

LauraKCurtis: How is it that no one notices someone’s house being wrapped in carnival wrap? Clare2e: I believe I had a pair of Hammer pants with stripes that wide. But there’s a lot weirder stuff people have stopped paying attention to in this town.

CMorgan: Got to say love the Cher soundtrack.  I couldn’t keep myself from singing along to “Gypsies, Tramps, and Thieves” at this point.

Clare2e: I think the flower and ribbon thing may just be Victoriana gone wild, because the doc’s wife has nothing but time on her hands.  And just like Mutato, I’m a sucker for Mask, even if it makes me blubber. Clare2e: I’m hardly mutated at all, and I didn’t get a pony! I also don’t have a gruff parental figure in perennial overalls who’ll cover my rural rape spree, so that’s one in the plus column. Blah, blah Polidori patricide, and back to the diner where the locals have gotten distinctly hostile to the feebs.

CMorgan: I love the complete disregard this town as a whole shows our country’s highest-ranking law enforcement agency. Clare2e: I’m not made of stone. When a lonely, two-mouthed mutant mourns inconsolably, pass me the Kleenex, too.  But sooner or later, it’s always coming down to torches, isn’t it?

redline_:  The black-and white film, the humor, the compassion you feel for The Great Mutato (that you don’t always feel for TXF monsters)…it’s gloriously bizarre.  No wonder this one’s an Emmy winner. CMorgan: And he can talk, ignoring all the odd moaning up until now. What better way to end the Frankenstein-like episode than with his soliliquy? I love that Mulder is the one who insists upon a happy ending.

Clare2e: I like meta-Mulder.  Besides, Bugs Bunny broke the 4th wall all the time.

redline_: You know you’re a shipper when. . .you swoon upon hearing “Walking in Memphis.” 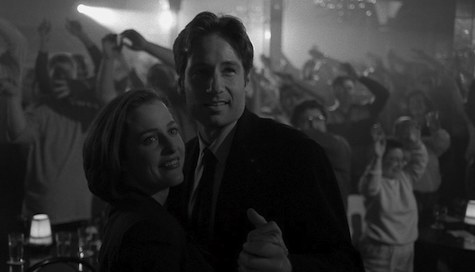 CMorgan: May I just say that Mutato’s dancing at the end is nothing less than inspiring.

redline_: TGM’s foot-tapping and dancing make me wibbly, you guys.  How weird is it that this is such a feel good moment?? Dance, dance, TGM!

redline_: It’s true, people: this last scene in which Mulder and Scully slow dance in black and white to Cher (Cher!) is one of my favorite moments in the show and the perfect end to one of my favorite episodes on TXF. Despite, (hell, maybe because of?) the context, I find it incredibly romantic when Mulder holds out his hand and then swings Scully into his arms.

Clare2e: And for hardcore Mulder/Scully shippers, there was a closing kiss, too.  It wasn’t scripted, according to writer-producer Frank Spotnitz’s blog Big Light, but David Duchovy and Gillian Anderson wanted to do a take with it, so it was filmed, though not aired.

LauraKCurtis: And what’s not to love about the happily ever after?