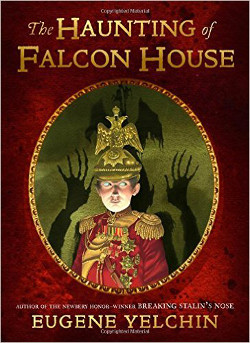 The Haunting of Falcon House by Eugene Yelchin is a translated children's story about the story of Prince Lev Lvov of Russia and the mystery of the Falcon House (Available June 14, 2016).

A long undisturbed bedroom. A startling likeness. A mysterious friend.

When twelve-year-old Prince Lev Lvov goes to live with his aunt at Falcon House, he takes his rightful place as heir to the Lvov family estate. Prince Lev dreams of becoming a hero of Russia like his great ancestors. But he'll discover that dark secrets haunt this house. Prince Lev is the only one who can set them free—will he be the hero his family needs?

In which a mysterious boy appears in the window

Mother often hummed while sketching. I never mentioned it, not wanting to embarrass her. Once after nightfall in our dining room, she hummed the whole time while we were sketching Woolly in my drawing album. On the table, our cat snoozed as always, his ears twitching. Mother sketched him from his tail, and I from his head, until our pens met over his tummy in the fold between the pages. The picture was complete, the lines unbroken, as if one person had sketched the cat.

“Don’t simply follow the rules,” Mother taught me. “Draw from your heart, Levushka.”

Whenever Mother talked about matters of the heart, she called me Levushka, but my proper name is Prince Lev Lvov, as was the name of every Lvov who has ruled Falcon House. My ancestors fought in every war and served every emperor since the great Tsar Peter. I was the last of an ancient lineage, so when the invitation arrived from Falcon House for me to take up my noble duties, I knew the time had come to cut my mother’s apron strings.

The journey to Saint Petersburg was long. The days might have passed quickly had I company, but my aunt Olga Lvovna chose to book me a private train compartment for my journey to Falcon House. As children ran laughing up and down the aisle outside my door, I dutifully occupied myself with sketching or tossing rumpled paper balls to an imagined playmate. Mostly I stared out the window framed in hoarfrost as the train puffed across fields shrouded in snow. Snowdrifts flickered along the tracks, but far away walls of firs stood in the mist like mourners at a funeral. When at night the window turned black, I was startled by the reflection of a face. But it wasn’t mine; some other boy’s small, waxen aspect gleamed back at me, eyes wide, brilliant, and imploring. I blinked. It was my face again in the glass.

“Loneliness can play tricks on you,” Mother liked to say, and, for a moment, I wished she had taken the journey with me.

In which Prince Lev arrives in Saint Petersburg

Saint Petersburg was so cold that when the train drew close to the station, the windowpane beside me transformed into a sheet of icy lacework. I breathed a clear eyelet onto the ice and peered through it. For an instant, the golden domes and spires of the city sparkled in the far-off distance, but then the engine’s hissing steam blocked out the view. The train pulled along a platform cloaked in glassy mist, a whistle blew, brakes squealed, iron buffers clashed together, and the train ground to a stop.

My aunt Olga Lvovna, my father’s older sister, had summoned me to Petersburg, but she had not come to meet me. She’d sent her coachman instead. A man with a fiery beard was waiting for me on the platform. He said his name was Klim. I had assumed he picked me out amongst the passengers because I was the only boy getting off the train without parents, but I was mistaken.

“Had I not my own self many years ago driven Master’s casket to the burial,” said he, gaping at me in amazement, “I would have sworn he’d never died.”

Mother had never told me that I resembled my famous grandfather, but so much the better. What a nice surprise!

Klim tossed my trunk upon his shoulder and guided me out of the station to where his sleigh was waiting. I climbed in eagerly. Klim tucked me under a bearskin, mounted his seat, and took up the reins.

“Step lively, sister!” he called to his chestnut mare. The mare snorted and stomped the snow first with one foot, then another, as if she were of two minds which leg to start with. Klim twisted in his seat and winked at me good-naturedly.

“She’s only kidding, Your Excellency,” he said. “When she gets going, the Devil himself can’t stop her.”

In which Prince Lev echoes his famous grandfather

Klim’s chestnut mare flew like the wind. We dashed along snow-coated streets that sparkled like sugar, crossed bridges arching over frozen canals, and passed palaces gleaming with gold. Shops with enormous windows flashed by like tinfoil. The gas lamps had just been lighted, and below the lamps flowed crowds of richly dressed people. Sleighs and carriages I’d never seen the likes of crisscrossed in all directions. The crisp and frosty air rang with crackling whips, ringing bells, and sleigh runners squeaking over the dazzling snow.

At first, snowflakes twirled in the air like feathers, but soon they fell so thick and large that the sky became dark. The gas lamps, the festive crowds, and the vehicles we passed along the way vanished into the rapidly gathering gloom, but Klim’s chestnut mare kept at full gallop. At such furious haste, snow began stinging my face while wind was howling into my ears.

It was then that I fancied my mother’s arms cradling me under the bearskin covers. “Do not be afraid, Levushka, dear heart,” she whispered into my ear softly. “I’m here with you.”

At the station, Klim had said that I looked like my grandfather, so when I reminded him that he was to deliver me to my aunt’s, I tried to speak the way my grandfather might have spoken. “Be so kind, my dear man,” I said in a grown-up voice, “as to refrain from needless chatter and carry out my aunt’s orders without delay.”

Eugene Yelchin is the author and illustrator of Arcady's Goal and the Newbery Honor book Breaking Stalin's Nose. Born and educated in Russia, he left the former Soviet Union when he was twenty-seven years old. Mr. Yelchin has also illustrated several books for children, including Crybaby, Who Ate All the Cookie Dough? and Won Ton. He lives in California with his wife and children.