June 25, 2020
Opium and Absinthe (Lake Union Publishing, July 1, 2020) is a new historical novel full of intrigue, occult mystery, and unexpected twists from the bestselling author of A Beautiful Poison, Lydia Kang. Read on for Lydia's sources of inspiration—both on the page and on the screen—for this spellbinding, historical medical mystery.

Inevitably, all authors get the same question about their book: How on earth did you come up with this idea?

I can’t answer that question in a single sentence. My recent book, Opium and Absinthe, is the third historical medical mystery I’ve written. The creation of each novel has been like stitching together a monster of a story with several vital parts that begged to be included. One by one, I gathered, until it was time to sew them all together into a book.

The first idea for Opium and Absinthe was about opium. In 2017, my nonfiction book Quackery: A Brief History of the Worst Ways to Cure Everything (co-written with Nate Pedersen) was published by Workman Publishing. We covered topics like arsenic, lobotomies, radium, and opiates—all things used throughout history to treat patients but that were very likely going to kill them along the way. Morphine was isolated in the early 1800s and the hypodermic needle was invented a few decades later. What shocked me during the research process was learning that wealthy women in the late 1800s often used and abused injectable morphine, because the syringe kits were pricey. It’s not exactly the image we conjure up when thinking of needle-wielding opioid addicts. In Opium and Absinthe, I considered having a main character with a not-so-hidden morphine habit to give the reader some empathetic insight into the complexities of addiction.

Another idea came from my home. My children love musicals, and one of them became obsessed with Newsies. We were watching the original cast show a lot and I became interested in Kid Blink and the newspaper companies that really squeezed these poor newspaper sellers with their greedy fists. This all took place in 1899, so suddenly, I had a date!

While I was looking into 1899, I researched all the events that happened that year to get more ideas. I found out that Bram Stoker’s Dracula was released in the United States in 1899. I’ve been a fan of Dracula for a while. I was in college when Francis Ford Coppola’s movie came out and it really left an impression. Gary Oldman’s brilliant, broken-hearted Dracula! Winona Ryder’s gorgeous Mina, and the irresistible Lucy! And let’s not forget Keanu and the perfectly weird performance by Anthony Hopkins. Could I somehow write about Dracula and vampires in a way that was not technically speculative fiction? I accepted the challenge.

Absinthe itself has a fascinating history—think of Henri de Toulouse-Lautrec, Hemingway, and Edgar Allen Poe all drinking absinthe in their time. I decided I would make absinthe a player in the story.

Oh, and about the absinthe. There is no absinthe in Bram Stoker’s Dracula. I have the annotated version and it’s just not there. But it’s in Coppola’s movie, and I loved the scene when those bubbles in the green fairy liquid became corpuscles of blood. So macabre. And absinthe itself has a fascinating history—think of Henri de Toulouse-Lautrec, Hemingway, and Edgar Allan Poe all drinking absinthe in their time. I decided I would make absinthe a player in the story.

I have a habit of putting famous personages into my historical novels. In A Beautiful Poison, which takes place in 1918, I included Dr. Charles Norris. Dr. Norris was the first Chief Medical Examiner in New York City and a pioneer of forensic toxicology. In The Impossible Girl, which takes place in 1850, I turned to Elizabeth Blackwell, the first female physician in the United States.

For Opium and Absinthe, it was Nellie Bly (née Elizabeth Jane Cochrane). Nellie Bly was one of the most famous female journalists of all time. Her investigative work on the Women’s Lunatic Asylum on New York’s Blackwell’s Island was a shocking exposé on the horrors of mental health treatment in the late 19th century. She actually fooled people into thinking she was insane in order to be admitted and treated like any other asylum patient. Brave, and brilliant.

So, there you have it. I had a year, I had a famous personage, I had vampires, and I had opium and absinthe. With that in hand, I went to work in writing a story that brought together aspects of a world we’ve long forgotten, but touched on topics that are all too current—addiction, the violent loss of loved ones, and the burning desire to find the truth—no matter what the consequences. 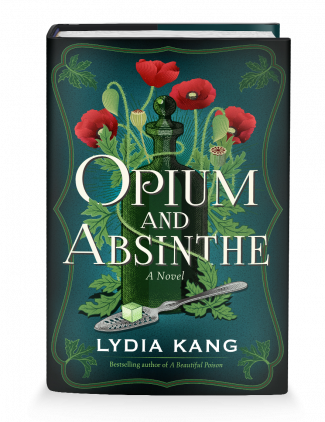 About Opium and Absinthe by Lydia Kang:

New York City, 1899. Tillie Pembroke’s sister lies dead, her body drained of blood and with two puncture wounds on her neck. Bram Stoker’s new novel, Dracula, has just been published, and Tillie’s imagination leaps to the impossible: the murderer is a vampire. But it can’t be—can it?

A ravenous reader and researcher, Tillie has something of an addiction to truth, and she won’t rest until she unravels the mystery of her sister’s death. Unfortunately, Tillie’s addicted to more than just truth; to ease the pain from a recent injury, she’s taking more and more laudanum…and some in her immediate circle are happy to keep her well supplied.

Tillie can’t bring herself to believe vampires exist. But with the hysteria surrounding her sister’s death, the continued vampiric slayings, and the opium swirling through her body, it’s becoming increasingly difficult for a girl who relies on facts and figures to know what’s real—or whether she can trust those closest to her.

Lydia Kang is an author of young adult fiction, adult fiction and non-fiction, and poetry. She graduated from Columbia University and New York University School of Medicine, completing her residency and chief residency at Bellevue Hospital in New York City. She is a practicing physician who has gained a reputation for helping fellow writers achieve medical accuracy in fiction. Her poetry and non-fiction have been published in JAMA, The Annals of Internal Medicine, Canadian Medical Association Journal, Journal of General Internal Medicine, and Great Weather for Media. She believes in science and knocking on wood, and currently lives in Omaha with her husband and three children.