August 12, 2021
In The Elimination Threat, FBI Special Agent James Mason is pitted against his most terrifying adversary yet: a mass murderer with a twisted signature known only as the Dragon. Read an excerpt below! 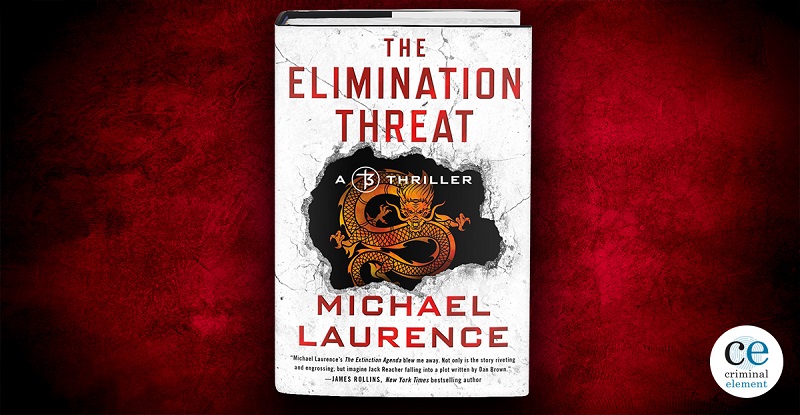 Special Agent James Mason emerged from the elevator onto the fortieth floor of a building that resembled a giant obsidian stake driven into the heart of downtown Denver. He’d thrown on a plain white T-shirt, jeans, and a baseball cap, covering his sandy blond hair and shielding his blue eyes from the rising sun, which glared through the wall of windows to the east and made the surrounding skyscrapers appear to burn. It was surreal to think that the last time he was here he’d nearly died, when a helicopter crashed into the penthouse suite and turned the building into a towering inferno. While the National Transportation Safety Board’s investigation had ruled it an accident—a combination of mechanical failure and pilot error—Mason knew that their explanation was the furthest thing from the truth. Had a hacker known as Anomaly not alerted him to the impending attack at the last possible second, his entire team would have been killed, right along with the pilot, whose body had been so badly burned that the medical examiner had been unable to identify him.

“Pretty freaking unbelievable, right?” Ramses Donovan said. He wore a button-down shirt open to the chest, his ebon hair slicked back, and an expression of pride as he gestured to his private nightclub, which offered a stunning 360-degree panoramic view of the entire front range of the Rocky Mountains. “I was starting to think they might never finish.”

Mason took in the room around him. Everything looked just as it had before, and yet different at the same time. The leather of the seats was a slightly darker color, the lighted terrariums built into the support columns subtly altered, and the freestanding wet bars not quite where they’d been before, or perhaps his recollection was tainted by the memory of the chopper’s spotlight turning them into silhouettes in the seconds before impact.

“I don’t know how you can move back in here after what happened,” Special Agent Jessica Layne said. She walked between the tables, tracing the contours of the booths with her fingertips. Her raven black hair was pulled up from her slender neck and her sapphire eyes betrayed nothing of the thoughts playing out behind them. “It’s only a matter of time before they take another shot at you.”

“Let them,” Ramses said. He’d never even considered living anywhere else. It would have been a betrayal of everything that made him who he was: the human personification of the middle finger. The placid exterior was a disguise, though, one so transparent that Mason could practically see the rage boiling underneath it. When Ramses found the man responsible for destroying his sanctum and uprooting him from his life, he was going to tear him apart with his bare hands. “They know where to find me.”

“Which, fortunately, is no longer at my place,” Mason said.

“No offense, but if I’d been forced to spend another night in that dump of yours I’d have put a gun in my mouth.”

From Mason’s experience, any statement qualified by a phrase like “no offense” was meant to have the exact opposite effect, but he didn’t take the insult personally. The building he called home— which at various times in its existence had been a tire shop, a used-car dealership, and a gallery for graffiti artists ambitious enough to scale the twelve-foot chain-link fence—stuck out like a sore thumb, even from the abandoned industrial wasteland surrounding it. Ramses had largely had his run of the place for the past six months while his penthouse was being rebuilt and Mason was splitting time between the Denver and Manhattan field offices of the FBI, sifting through the fallout of the Times Square Massacre on New Year’s Eve, during which the Scarecrow—a woman formerly known as Kameko Nakamura—had dispersed Novichok gas from handheld vaporizer units at the stroke of midnight. She’d killed 107 innocent people and overwhelmed emergency rooms with thousands more, but she’d failed to assassinate her primary target, Slate Langbroek, whose family had been responsible for the twisted experimentation to which she and her cherished brother, Kaemon, had been subjected as children. The chairman of the executive board of directors for Royal Nautilus Petroleum might have escaped her wrath and slipped through the Bureau’s net, but he’d eventually have to come up for air, and when he did, Mason and his team would be waiting.

Assuming, of course, the Thirteen didn’t find him first.

Mason leaned against one of the elaborate terrariums, inside of which was a waterfall surrounded by tropical trees and blooming plants. The sound of running water and the scent of damp soil were strangely calming. When he didn’t immediately see anything slithering or crawling around inside, he tapped on the glass.

“Do that again and you’ll be wearing a cast,” Ramses said. In another life, he would have made an amazing zoologist, albeit one who might not have made the best tour guide for small children.

A tortoise emerged from the foliage at the edge of the water. The right half of its shell appeared to have been burned.

“It survived the explosion?” Mason said.

“Nearly every animal in my collection did. Reptiles are resilient creatures. See the green tree python in that enclosure over there? He escaped the fire and was living in the ductwork until about two weeks ago. You should have seen the look on the contractor’s face when he told me what he’d found.”

“That snake’s what, six feet long?” Layne said. “How did no one know it was there?”

“It happens more often than you’d think,” Ramses said. “Just last year, a western diamondback broke out of its cage in Arizona and somehow got into the plumbing. It came right up through the toilet of a restaurant down the street four months later and bit a guy squarely on the ass. Some dude in Wisconsin had an eight-foot red-tailed boa that he thought had escaped his apartment complex; ten months later it fell out of the ceiling onto his neighbor while she was sleeping. Hell, the Bronx Zoo lost an Egyptian cobra, which keepers eventually found, and a venomous mangrove snake that’s still on the loose. After the kind of beating the entire staff took in the papers and on social media, it’s no wonder nobody stepped forward to claim the mamushi that turned up in Brooklyn a few months back.”

“What in God’s name is a mamushi?”

“A species of pit viper,” Ramses said. “It’s the deadliest snake in—”

“Japan,” Mason said, finishing his old friend’s sentence for him. He caught the tail end of a thought and tried to hang on before it slipped through his grasp. “Show me where they found it.”

Ramses nodded and led them to a broad spiral staircase, which ascended into a marble anteroom with water trickling down three of the walls. The fourth was secured by a digital keypad and receded like the door of an elevator, admitting them into the private lair of a man who was probably even an enigma to himself.

Unlike the level below them, the residential suite had been completely remodeled. The living room looked roughly the same, with a monster flat-screen TV surrounded by furniture that appeared soft enough to swallow a man whole, only it was maybe half the size and there was no longer a swimming pool in the roof overhead. The computer setup off of the stainless-steel kitchen was gone, replaced by a security system displaying live footage of the building from every conceivable angle, inside and out.

Mason and Layne followed Ramses into the hallway, immediately forked to the left, and entered a room that hadn’t been there before. A networked workstation with six monitors, modeled after the secure website the Thirteen had used to covertly communicate and influence global events, dominated the far wall, while the remainder had been plastered with photographic displays of everyone and everything even peripherally related to the secretive cabal. There were pictures of four generations of Langbroeks, whose involvement with the Nazi Party and the U.S. Army’s chemical arsenal had laid the foundation for the Novichok threat; the Nakamura family, whose human experimentation for the Japanese army’s nefarious Unit 731 had continued state- side after World War II and given rise to the Scarecrow; and members of the Richter and Thornton bloodlines, who’d conspired to engineer and release numerous historical pandemics using their pet monster, the Hoyl.

Somewhere, hidden among them, were the threads that would unravel the mystery of the Thirteen.