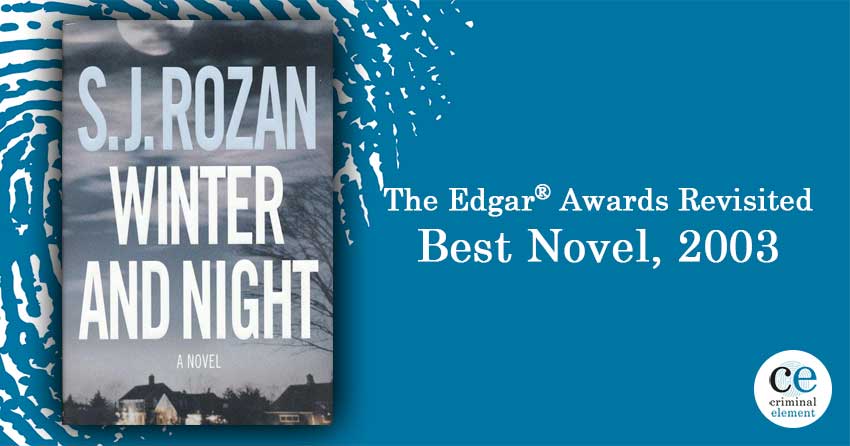 Lifelong New Yorker S.J. Rozan’s storied career has spanned decades and encompassed both writing and teaching. Her unique melding of substance, style, and structure has branded her one of the most decorated members on the contemporary mystery scene. Rozan has been the recipient of the Edgar, Shamus, Anthony, Nero, and Macavity Awards, as well as the Japanese Maltese Falcon and Private Eye Writers of America Lifetime Achievement Award. Winter and Night—her eighth novel to feature private investigators Lydia Chin and Bill Smith—won the Edgar Award for Best Novel in 2003.

As that story opens, Smith—an army brat with a checkered past—is awakened in the night by the ringing of his phone. Such interruptions tend to be harbingers of death, doom, or some equally unfortunate fate, and he answers with an appropriate sense of trepidation. Sure enough, there’s an NYPD detective on the line, informing him that they’ve picked up a kid who has refused to identify himself but gave up Smith’s contact information after hours of tedious talk. Intrigued, Smith agrees to go down to the Midtown South station; it seldom hurts to do favors for the local cops—especially when your file is tantalizingly thick. When he arrives, Smith is startled to find that the would-be mugger in question is his fifteen-year-old nephew, Gary Russell.

Last he knew, Gary was living in Sarasota; Smith’s been on the outs with his sister and her husband, so Gary’s appearance in the mean streets of the city are both alarming and unexpected. Gary is released to Smith’s custody without charges being filed, though he refuses to tell “Uncle Bill” what exactly prompted him to run away from home (let alone attempt to rob a homeless person)—though he does allow that his dad would be “cool” with it if he knew the reason. Before Smith can elicit any more information, Gary excuses himself to get some rest, proceeds to pop the bedroom window, and is once again in the wind. At a loss, Smith does the only thing that makes sense: He call his trusted partner, Lydia Chin.

It’s an intriguing premise to begin with, and one that Rozan elevates by dropping compelling nuggets of backstory. In addition to learning that Smith is largely estranged from his family—which underscores the urgency of Gary’s predicament—we also discover that he spent six years of his childhood living overseas, was partially raised by his uncle (an NYPD captain) during adolescence, and routinely found himself on the wrong side of the law. Additionally, there’s passing mention of Smith having lost a daughter at a tragically young age. While some of these threads are fleshed out and some not, each serves to motivate Smith’s actions and/or interactions in some way, adding depth of character to offset surface superficiality.

Smith and Chin begin their investigation on two fronts. He heads to suburban New Jersey after their resident hacker traces the Russell family to (fictitious) Warrenstown while she hits the streets to flash Gary’s picture and try to get a bead on him. Upon arrival, Smith has an awkward reunion with his sister, who has barely spoken to him since a divisive decision concerning their abusive father fractured the family. Despite a desire to appease her husband, who has forbidden Smith’s involvement (and has undertaken his own search for Gary in New York), she is desperate enough to allow him access to Gary’s bedroom and the family computer. There’s little in the way of evidence, and Smith comes away with the sense that Gary really is a good kid trying to find where belongs in a tug-of-war between friendship and football.

While tracking Gary’s acquaintances, Smith learns of his association with two social outcasts:  Paul Niebuhr and Tory Wesley; Paul is reputedly on a weekend camping retreat and can’t be reached, though his digital footprint seems to incriminate the two boys in… something. In search of wannabe it girl Tory, Smith discovers the Wesleys’ house in shambles—the results of a raging party thrown while her parents are away. Once the local cops arrive on the scene, they enter to assess the damage and find young Tory naked and dead in bed. It’s a situation that appears markedly similar to one that occurred in town two decades ago, in which a teen misfit was publicly accused of sexual assault before taking his own life—an act that conveniently put doubts about his guilt to rest. Many of those involved back then—including Smith’s brother-in-law, the high school football coach, and even the police chief—remain omnipresent now.

Coincidentally or not, Scott Russell had just recently moved his family to Warrenstown after a twenty-year separation; it’s a decision that will have unexpected ramifications. Smith’s quest to find his nephew—aided by an ambitious student reporter for the Warrenstown News and a fair-minded detective—inadvertently exposes an underbelly of crime, collusion, and cover-up, and he begins to suspect that Gary may be among the collateral damage. In addition to vehement opposition from Scott, Smith faces interference from the coaching staff, parents, and even the police chief himself, none of whom want to jeopardize the impending end-of-season match-up at nearby Hamlin’s by delving too deeply. After all, Warrenstown’s overriding philosophy appears to be: The game must go on (and Tory Wesley probably got what she deserved). This is a community that lives and dies by football. Literally.

Rozan’s depiction of small-town politics rings frighteningly true, as does her portrayal of the hero worship often afforded student-athletes despite clear evidence of gross misconduct. Yet there’s a reverence of sorts for the sport itself, which reflects Smith’s own athletic background as well as the author’s ardent enthusiasm for such spirited competition (though you’re more likely to find her on the sidelines of a Knicks game than a Giants game). But any revelry is tempered by the realities of bullying, elitism, and sadism. This exploration of hierarchical culture within academic institutions, and the resultant potential for revenge schemes, was meant to resonate in a post-Columbine world. Indeed, the uncertainty of Gary Russell’s motives can be viewed as symbolic of the hope/horror paradox with which adults have come to view America’s youth. The harrowing end game, then, is profoundly sad yet pointedly optimistic.

While the plot itself is very much reflective of a moment in time (shamefully, one that keeps repeating itself in real life), albeit, with universal connotations, the ever-shifting dynamic between Bill and Lydia is the book’s grounding force. They vacillate between friendship and flirtation, and are an odd match—Smith’s oversized appearance matches his volatile temperament while Chin’s compactness emphasizes her containment (as long as you don’t subject her to gender or racial stereotypes)—that epitomizes the law of opposites attracting. Smith may be the focus of this particular series entry, but Chin’s inherent compassion, keen intellect, and quiet poise render her indomitable. It’s no wonder the two have endured in an ever-shifting literary landscape.

Three books—The Shanghai Moon (2009), On the Line (2010), and Ghost Hero (2011)—followed before Lydia Chin and Bill Smith went on hiatus. Rozan, however, remained prolific, penning novels and short stories, even collaborating on two supernatural religious thrillers under the pseudonym Sam Cabot. But fans of the detecting duo saw them resurrected with the publication of Paper Son last July, which hints at a fruitful future for the partners in crime. And that’s an authorly touchdown, if ever there was one.

We’ll see everyone back here next week as author Nicolas Obregon stops by to review Resurrection Men by Ian Rankin, the 2004 Edgar Award winner of Best Novel. See you then!