Set sail for the relaxing coast of Cape Cod, but beware, the waters are choppy in this 1983 Edgar Award winner! 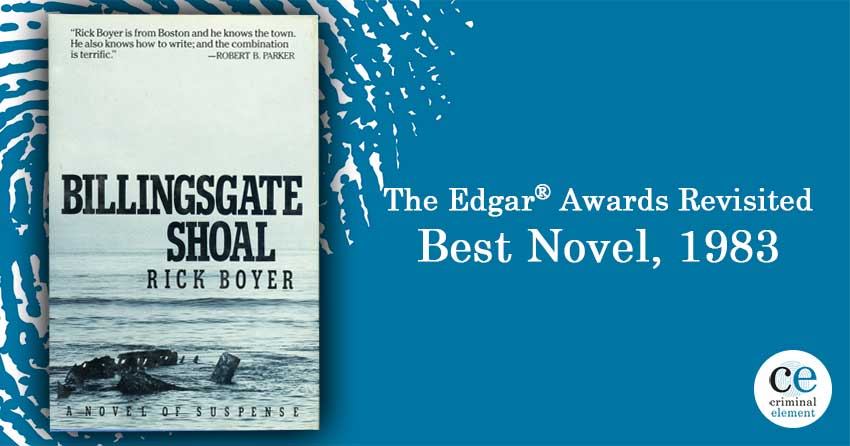 Billingsgate Shoal launches out of the gates from the first page with one of the best hooks I’ve read in a while. Charles “Doc” Adams introduces himself as a doctor and dental surgeon, with a wife and two college-aged sons. He immediately offers up a juicy tidbit:

My most interesting recent operation was quick, spontaneous, and without the benefit of surgeon’s tools or anesthetic. I cut a human head in two right down the middle. Deliberately. The operation was a success because the patient died.

I was not familiar with Rick Boyer before Billingsgate Shoal, and I chose not to research this book online beforehand for fear of spoilers. What I expected after one hell of an opening paragraph like that was the story of a man’s descent from loving husband and friendly neighborhood dental expert into deranged serial killer. Honestly, the opening paragraphs propelled me forward into a mystery novel that I ultimately was not fully satisfied with. The set-up is misleading, giving a false impression to the reader that Doc Adams is a man with serious issues and a strangely dark sense of humor, capable of committing murder at any given moment, which is not the case.

As it turns out, Doc Adams is no murderer, but an amateur sleuth. Surprisingly, after finishing it, I learned that Billingsgate Shoal isn’t a stand-alone novel, but the first book in a 9-book series following Charles “Doc” Adams. Even though I was disappointed that Doc is in fact a relatively normal man (instead of the murderous anti-hero I’d hoped for), there is still a lot to appreciate in this 1983 Edgar Award-winning novel.

The book opens on Doc Adams, who is stuck in a rut. It would appear that Doc has it all. A successful career as an oral surgeon. A happy marriage with a loving woman. Strong relationships with his two sons. Oh, and a summer house in Cape Cod… Despite all of this, Doc is unsatisfied with his life. Doc and his wife, Mary, summer at Cape Cod where he soaks in the idyllic location, taking long jogs on the beach, all the while searching for something to bestow meaning on his life. We learn early on that Doc is taking medication for depression and insomnia, recommended by his psychiatrist-friend Moe Abramson, but Doc believes the source of his discontent is the greater void of meaning in his life. When he suggests changing careers, Mary insists that he stay with dentistry, telling her husband that his anxiety simply boils down to a mid-life crisis—he should simply relax and enjoy the fruit of his labor.

Doc finally finds a suitable distraction from his aimless existence. One morning when wakes up early, he spots a boat moored on Billingsgate Shoal, a small island/sandbar off the coast that is only visible at low tide before the sun creates a heat shimmer over the water. Doc suspects that the crew of the boat intentionally grounded it at Billingsgate to perform a cheap repair (rather than take the boat out of the water to have metal-work done on the hull, the favorable tide would allow the crew to observe the bottom of the boat and apply any necessary patches). Doc watches the boat slink off afterward, the vessel riding low in the water, and his curiosity is instantly piqued. He enlists a friend—scuba-diving Allan Hart—to scope out the bottom of the vessel, called Penelope, on his next dive in the harbor. He thinks Allan will find a recently repaired gash on the bottom of the boat. Shortly after asking this favor, Doc learns that Allan Hart has died: the result of a head injury during his dive.

Doc is ridden with guilt, wondering if his inquiry was a direct cause in Allan’s death, and he glumly laments on existence/death often in the first few chapters:

Life is boring and death is terrifying. And here we are dangling on spider silk, caught right in the middle.

Perhaps trying to lessen his guilt in Allan’s death or perhaps as a distraction from it, Doc decides to investigate further—if he can contact the owner of Penelope, he might find out if crew members of the boat can shed any light on Allan’s death.

This is where Doc’s adventure truly gets underway. Initially unable to determine the owner of Penelope with public records, Doc continues to probe, diving into a tangled mystery involving falsified boat registrations, a missing CEO of a major corporation, a literal buried treasure, and a gun-running scheme concerning the IRA and Ulster Freedom Fighters. Doc begins by tugging at a single thread, and soon finds himself far down a rabbit hole of unanswered questions pertaining to international politics. To its credit, this book went in several directions I never would have guessed.

One of my biggest issues when reading Billingsgate Shoal, though, is the lack of characterization of its main players. Plot does the heavy lifting and drives the story, which isn’t a criticism, except for the fact that our hero has a dark, interesting past which is only ever teased at. Doc left medicine for dentistry after three of his patients died, the third of which was his 8-year-old nephew, Peter Brindelli. Also, recall that Doc is medicated for mental issues by Moe Abramson, with whom he has an unclear relationship. The table is set for Doc Adams to be our flawed protagonist, and a potentially unreliable narrator, which would only benefit the story. However, as the plot progresses, Doc’s past experiences and history lend little to nothing by means of influencing his decision-making. His motivations are equally unclear, unless you accept that he pushes himself to solve the mystery to distract from his existential dread (which could be a valid reading). Once the plot is underway, Doc essentially becomes an everyman, albeit with too much curiosity for his own good.

Doc’s wife, Mary, and his two sons are under-utilized. Mary plays the part of sounding board for Doc’s plans to blow the cover off a potential conspiracy and is otherwise not developed as a character. Mary enjoys pottery and ceramic glazing and uses a kiln in the yard to work. It’s an unimportant detail overall, but on my first reading, the kiln was yet another red herring as I patiently waited for Doc to transform into a serial murder (“Aha! The kiln is the perfect way for Doc to discard of the corpses of his victims.”). Likewise, Doc’s sons are only referenced briefly and don’t contribute to the plot. In one instance they do provide some comic relief when one of Doc’s sons seeks out his parents’ advice after possibly contracting an STD at his summer job. I’m surmising that Boyer introduced these characters early on to explore them more fully in the later Doc Adams novels, but if felt strange that they weren’t featured more heavily in Billingsgate Shoal.

Boyer does deliver in his prose. He has a lyrical way of writing about locations, especially while on the water at Cape Cod. Doc says the first time he spots Penelope out on the shoal, the scene was like a Winslow Homer painting. Boyer’s writing can be as expressive and textured as those seascape canvases. It’s clear that Boyer has a great sense of Massachusetts, and I think readers from the area would strongly appreciate those scenes. Doc’s hunt for Penelope (there are several boats with the name in the Massachusetts area alone), and the description of those vessels and their fittings can be tedious and disrupt the pacing. But Boyer can pull the reader from a quiet stakeout in the harbor to a bare-knuckle bar-fight that gets your pulse pounding. My only criticism is that Boyer should have paced out the action sequences a little better and should have written more action into the book overall because he navigates these scenes so well.

Rick Boyer also has a gift for writing unadulterated gore. In the climax of the novel, Doc Adams stumbles his way into the middle of the gun-running scheme. A full-blown gunfight ensues, and, amidst the crossfire, a woman catches a bullet to the throat. A dreadful description follows that puts me in mind of some of the more brutal Stephen King lines I’ve read:

The blood came back through the thousands of tiny blood vessels, and now poured forth faster and faster. There was no big spurting; no artery had been severed. But I soon heard a sound from her that will haunt me for the rest of my days. I’d heard it before, when I was a kid, on an Iowa farm. They had slit a hog’s throat, and beat it with sticks to keep it running around the yard so its heart would pump all the blood out. And I heard screams coming through the blood. Underwater screams. Underblood screams.

The plot is deftly woven, intricate, and complex, but something was missing from this book. At several turns, Boyer slips his reader these intriguing nuggets about Doc Adams that are never revisited. It’s clear that Boyer is in control of the story, and he could be including these seemingly unnecessary details for payoffs in later installments in the series, but I still wasn’t totally satisfied. When Doc decides to obsess over the boat that moored on Billingsgate Shoal that day, he no longer shares his troubling existential concerns, and the reader really doesn’t get much more into his character—it’s as if Boyer is keeping the reader at arm’s length, concealing a darker story looming behind Doc Adams.

Fun Facts from the 1983 Edgar Awards: