The Criminal Next Door

November 5, 2021
Author of The Secret Next Door Rebecca Taylor recalls a very real, very disturbing discovery in her own neighborhood that would inspire her engrossing domestic thriller that reminds us that nothing and no one are ever as perfect as they seem. 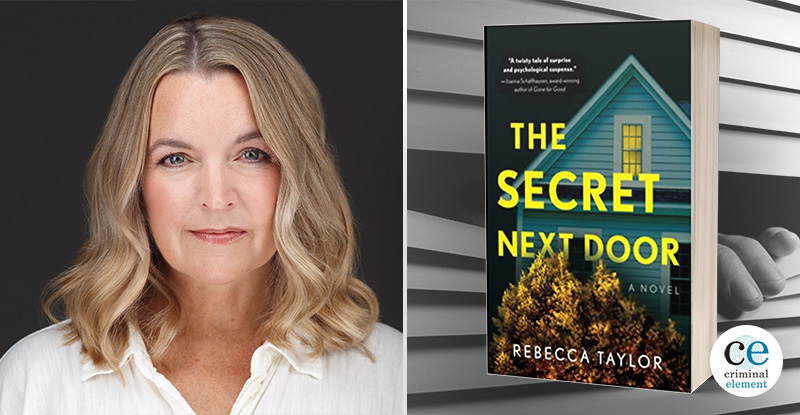 I’m frequently asked, “Where do your book ideas come from?” It’s a tough question because every book always has multiple influences working in concert. Which partial idea that contributes to a whole book should I point to? For my newest book, The Secret Next Door, I have so many answers but one of the inspirations that contributed to the storyline was when a resident in my own neighborhood was arrested for a cold case murder that occurred thirty years ago.

He was identified when one of his distant relatives submitted their DNA to a commercial ancestry/DNA company and that information was cross-referenced with the thirty-year-old DNA saved from the 1987 crime. Authorities were able to narrow their scope and surreptitiously collected a recent DNA sample from the suspected perpetrator, which consequently ended up being a match for the crime scene DNA.

I remember following the story of his arrest and eventual conviction. When the grizzly details of his crime were released, it was stunning to think that this man had been living in my neighborhood, a block from the elementary school, for years. Did anyone suspect? What did his closest neighbors think about all this?

These are the questions that inspired me while working on The Secret Next Door. In my book, the neighbors are by and large completely surprised that a prominent member of their community could possibly be guilty of such a crime. Of course, this is fiction. I as the author concocted a fictional answer that worked for my book. But as it turned out, in my real-life neighborhood, there was a lot less shock and quite a bit more relief.

I don’t live close to where our own neighborhood killer did. I’m a few subdivisions away. I didn’t know this man personally and never had interactions with him. It was only by interviewing his closest neighbors that I learned the truth about what it was like to live life on the same street with a secret murderer.

The only positive description shared about him was that he was an excellent craftsman and enjoyed woodworking. Apparently, he had an elaborate workroom in his basement that he kept immaculate. “Like a showroom, really,” one neighbor explained. Other than that, neighbors describe him as aggressive. He was nearly universally disliked by everyone that lived on his street. They thought he was a jerk. On several occasions he was involved in verbal arguments with other men in the neighborhood that almost escalated into physical fights. He was regularly witnessed to engage in acts of road rage in the neighborhood and even screamed out his window as he sped past a teenager who was learning to drive with his dad. He did not stop for pedestrians at crosswalks. On more than one occasion he blared his horn at his neighbors as he flipped them the finger then pulled into his own garage.

One neighbor, who has a professional background in criminal profiling, told family and friends early on that something was definitely not right with the man. He himself refused to be around him and cautioned others to do the same. His warnings were largely brushed off. The man was a jerk, sure, and certainly, nobody other than his wife liked him, but this abundance of caution seemed mostly unfounded.

Until the morning everyone woke up to find their street infiltrated with SWAT, FBI, and Army CID agents, and the highly aggressive neighbor was arrested in his home.

As it was described to me, his neighbors were surprised that the event was happening, but not at all shocked that this particular neighbor was being arrested. When they learned about the details of the case against the man, and then his eventual conviction, it was disturbing, but also made sense based on their own experiences with him. They all had a feeling something was askew, even if they never could have guessed at the depths of depravity their neighbor was capable.

In contrast, the neighbors in my fictional world were floored. The man they thought they knew for so many years wasn’t the man they thought, and it disturbed them to realize their internal guidance systems were unable to detect a killer among them.

The truth is that both these scenarios play out every day. Sometimes a person is phenomenal at deception while others find it impossible to control their rage enough to even pretend at being a decent neighbor. But it was this idea, that we think we know our neighbors, and that knowing helps us to feel safe within our chosen communities, that partly inspired my new novel, The Secret Next Door. 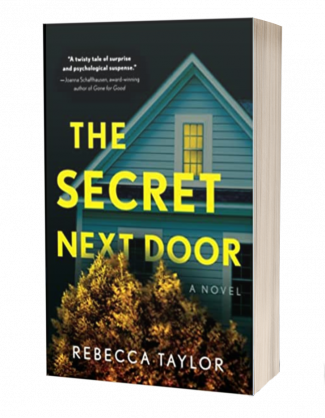 About The Secret Next Door by Rebecca Taylor:

Alyson Tinsdale is giving her son the childhood she never had: a stable family, a loving home, and a great school in a safe neighborhood.

Bonnie Sloan is the neighborhood matriarch. With her oldest son headed to Yale, and her youngest starting kindergarten, Bonnie is now pursuing her own long-held political aspirations despite private family struggles.

When the open space behind some of the most expensive homes gets slated for development into an amusement facility, the neighborhood becomes deeply divided. The personal pressures and community conflicts ratchet with every passing day, but it’s when a thirteen-year-old is found dead beside the neighborhood lake that simmering tensions boil over into panic.

Gossip flows, lies are exposed, and accusations are made as cracks run through the community’s once solid foundations. The neighborhood’s faith in exterior appearances is eclipsed by the secrets every house keeps. And as Bonnie and Alyson fight to keep their children safe and their messy personal lives from becoming neighborhood knowledge, it becomes clear that their neighbors might not be who they appear to be.

Rebecca Taylor was born to a single British teen during a February blizzard in Green Bay, Wisconsin. When she was three, her mother met and married a US Marine. Like many children of military families, Rebecca spent the next fifteen years of her life moving. From Canada to Okinawa, and then all over the United States, she attended eight different schools before graduating high school. Given that, she didn’t really understand how people managed to stay in one place for more than twelve months. So, she spent her twenties working as an international flight attendant while pursuing degrees in psychology and sociology. It wasn’t until she was pregnant with her first child and working on her graduate degree in psychology that she began writing fiction. Rebecca has since written eight novels: ASCENDANT won the Colorado Book Award in 2014, and AFFECTIVE NEEDS was a finalist for the Romance Writers of America RITA Award in 2017. HER PERFECT LIFE was her first work of psychological fiction and was published by Sourcebooks in 2020. THE SECRET NEXT DOOR will release from Sourcebooks on November 9th, 2021.