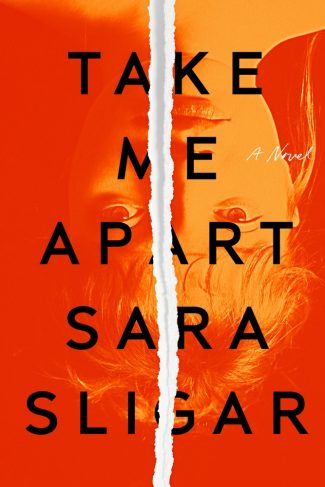 Take Me Apart by Sara Sligar is a novel of psychological suspense that follows a young archivist’s obsession with her subject’s mysterious death as it threatens to destroy her fragile grasp on sanity.

When the famed photographer Miranda Brand died mysteriously at the height of her career, it sent shock waves through Callinas, California. Decades later, old wounds are reopened when her son Theo hires the ex-journalist Kate Aitken to archive his mother’s work and personal effects.

As Kate sorts through the vast maze of material and contends with the vicious rumors and shocking details of Miranda’s private life, she pieces together a portrait of a vibrant artist buckling under the pressures of ambition, motherhood, and marriage. But Kate has secrets of her own, including a growing attraction to the enigmatic Theo, and when she stumbles across Miranda’s diary, her curiosity spirals into a dangerous obsession.

The house where Miranda Brand had lived and died was, on the outside, unremarkable. It was perched on the crown of the hill like a dollop of mayonnaise on the bald curve of a hard-boiled egg. The house was gray, the same color as the sky, so that in some places it was hard to see where the fog stopped and the building began. The color could have been beautiful once, but the sea breeze had beaten the paint to drabness. Two overgrown trees fanned across the front, their tallest branches just brushing the windows of a third floor. It could have been any house on any hill in a coastal town, East Coast or West, and yet as soon as Kate saw it, her heart gave a strange, swift beat.

Maybe it was just exertion. In a terse, unpunctuated email a few days earlier, Theo Brand had given her directions to the house via a “walking path” from town. She had imagined an easy stroll, but instead she had found herself climbing a steep, tangled furrow through redwoods until sweat bloomed between her shoulder blades. Theo Brand had also sent her the combination for the gate on the fence that encircled the property, but the lock was so rusty that Kate had spent five minutes scraping it with a bobby pin just to get it open.

Despite the delay, she was fifteen minutes early. Too early to knock. She stood at the edge of the clearing, eyeing the house and huddling into herself to stay warm. It was colder here than she had expected, the morning air as wet and icy as a dead fish, and all the little hairs on her arms were standing up. Last night had been weird—her aunt and uncle tossing out information on everything from area hikes, to the guest room toilet’s quirks, to the local beach’s rules, while Kate chewed an overcooked steak and pretended like it was all part of her daily routine. Again she thought of that last party in New York, the thickness of the summer midnight, the throwback playlist and the carefully shellacked story of her move, and she felt disoriented, as if she had missed a step while going down the stairs.

She checked her watch. Thirteen minutes now. Across the brittle brown loop of the lawn, the trees picked up again, except for a notch to the west, where they had been cut away to expose a view of the sea. With another glance at the house, she hitched her tote bag up on her shoulder and started across the lawn.

Theo Brand. Their thirty-minute phone interview had been brisk, and afterwards Kate had turned to Google to fill in the blanks, with limited success. She learned he had gone to Harvard, bounced between a few successful internet start-ups, and now ran some computer-related consulting business with a sleek website. In the past few years, he had been featured on a few 35 under 35 lists for the tech industry. He had been mentioned, of course, in his father’s obituary from six months ago. But for someone so young and attractive, with a scandalous family history and an impressive career, the magazine articles were surprisingly boring. In interviews, he declined to comment on anything unrelated to work, leaving his interviewers palpably frustrated. The only personal information Kate had found was a line item in a Bay Area gossip blog about his divorce last year from a woman named Rachel Tatum.

Not a single article where he spoke about his mother.

Kate had been on the wrong side of enough news reports over the past year to understand why he was so private. On the other hand, she had taken the job assuming she would learn more about him at some point. She had figured that they would talk again before she moved all the way across the country, or that he would send detailed instructions about what exactly the work would entail. Now, as she made her way past the silent house and into the backyard, she realized that the moment was here and she had run out of time. This was it. This was all she knew.

In the backyard, the slope spilled down into the edge of the woods, and below that a cliff. No luck on the view, even through the break in the trees: the fog blanked out whatever lay beyond. Kate felt turned around again, swaddled in the gray cocoon of mist. It was unreal that just the day before, she had been struggling to wedge her suitcase through the airport bathroom stall doors that inexplicably always opened inward. Unreal that a few weeks ago, she hadn’t thought about Miranda Brand since that Contemporary Art lecture in college, and now she was here, at the woman’s house.

Far down the incline, Kate spotted a glint of metal. The fence she had come through must encircle the entire house. When she had closed the gate and re-jammed the lock, she had trapped herself inside.

“What are you doing?” a voice said from right behind her.