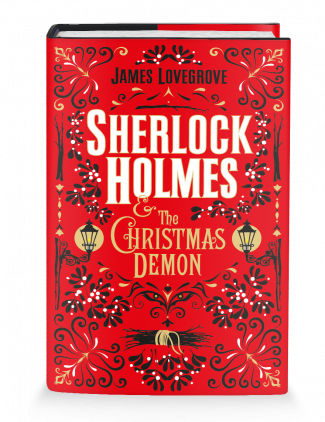 Sherlock Holmes and the Christmas Demon

Our train rattled out of King’s Cross shortly after ten the next day, bearing us northward to York. Overnight, clouds had set in over London and the Midlands and yet again snow had begun to fall heavily. Fat flakes flurried past the carriage windows, mingling with the smoke from the locomotive’s funnel to create a flickering, chiaroscuro whirl of white and grey outside.

Some thirty minutes into the journey Holmes remarked that we were making good time, in spite of the conditions. “We are travelling at a mean speed of sixty-eight miles an hour,” he said.

“How on earth can you tell?” I asked.

He put away his half hunter, which he had been consulting. “Simple. The standard length of a piece of rail track on the Great Northern Railway is sixty feet precisely. The wheels beneath us make a distinct clack every time they cross the join between one rail and the next. The clacks are occurring at a rate of approximately a hundred per minute. The rest is pure arithmetic. One may make a similar calculation using the trackside telegraph poles, but at night, or on a day like today when visibility is so poor, the rail-length method is more practical.”

Having changed at York for the Scarborough line, we pulled in at Bridlington station some three quarters of an hour later. A brougham awaited us out front, along with a taciturn coachman who, in a thick Yorkshire brogue, ventured the following greeting: “Mr ’olmes and Dr Watson? Miss Eve has sent me ter tek thee ter Fellscar. Put thah bags on’t back, gentlemen, and ’op in. Thah’ll find blankets on the seats ter wrap thissen in.”

The snow had by now stopped falling but lay thick all around. The brougham trundled through white-blanketed countryside, its wheels and the horse’s hooves making scarcely a sound on the road. The gently undulating landscape was parcelled up by drystone walls, which were mostly buried under snowdrifts. Here and there a tree strained upward from the ground, seeming to claw the overcast sky with its bare branches. We passed the occasional mean-looking, half-derelict dwelling – a croft, a smallholding – which if not for the skein of smoke rising from its chimney would have appeared uninhabited.

Then the road dipped down through a valley. At a junction, I spied a fingerpost pointing to Yardley Cross, but we took a different, unmarked route along a narrow track, and presently, as the brougham crested the brow of a hill, Holmes and I gained our first glimpse of Fellscar Keep.

I cannot say I was filled with any great joy, for the castle, huge as it was, seemed eminently forbidding. I had had little idea what to expect, but it surely was not this rambling agglomeration of black stone topped by an equally black slate-tiled roof. The edifice, built in the Gothic Revival style, had neither symmetry nor elegance. The windows were small and mean, and the battlements lofty and teeming, topped with toothsome crenellations. Wing abutted against wing, showing, to my mind, no obvious plan – a collision of irregular geometric shapes such as a child might make with wooden building blocks.

In all, the castle looked not to have been constructed so much as to have grown, coral-like, from the lake island upon which it perched and whose surface it fully covered. Ribbons of snow lying atop lintels, eaves, copings and buttresses did something to soften the stark cheerlessness of it all, but not much.

The track wound downward through woodland, emerging from which we had a much better view of the castle. Nearer to, however, Fellscar Keep was only the more oppressive-seeming. It loomed gracelessly against the glowering sky, as though its architect desired any who came before it to feel small. Its overall demeanour was that of a brooding, hulking thug challenging all comers to engage in fisticuffs.

As the brougham approached the gateway that afforded access to the causeway connecting the castle to land, a gunshot resounded from close by. Our horse, startled, bucked within the traces, and the coachman cried out, “Whoa there!” and was obliged to steady the beast with a tug on the reins and a tap of the whip.

A second gunshot followed, louder than the first, and the anxious nag came to a complete halt, whinnying.

As Holmes and I peered out of the cab windows, we saw a pair of men stride out from the woods to the left of us. Each was dressed in tweeds and bore a double-barrelled 12-gauge shotgun – a Purdey, if I did not miss my guess. Neither, I noted, was carrying his weapon broken as he ought.

They walked towards the four-wheeler with a purposeful air, and I, overcome by a growing unease, wished that my service revolver was immediately to hand, rather than outside the brougham, packed in my holdall on the back. Holmes, sensing my agitation, patted my arm.

“We are in no imminent danger,” said he. “Do you not recall Miss Allerthorpe telling us that her father and uncle go out shooting together? These two, I am certain, are they, indulging in that very pastime. Their age and dress marks them out as wealthy landowners, while their self-confident bearing announces that they are masters of their domain, with every right to be here.”

“Yet they fired their guns, when they must surely have seen us coming,” I said. “They knowingly frightened the horse. That bespeaks hostile intent, does it not?”

He shook his head. “A certain casual meanness, perhaps. I believe that you and I are being greeted in a manner meant to intimidate. Let us not give these fellows the satisfaction of thinking they have succeeded.”

Comment below for a chance to win a copy of Sherlock Holmes and the Christmas Demon by James Lovegrove!

Sherlock Holmes and the Christmas Demon Comment Sweepstakes: NO PURCHASE NECESSARY TO ENTER OR WIN.  A purchase does not improve your chances of winning.  Sweepstakes open to legal residents of 50 United States, D.C., and Canada (excluding Quebec), who are 18 years or older as of the date of entry.  To enter, complete the “Post a Comment” entry at http://www.criminalelement.com/sherlock-holmes-and-the-christmas-demon-new-excerpt-by-james-lovegrove/ beginning at 12:00 p.m. Eastern Time (ET) October 22, 2019. Sweepstakes ends at 11:59 a.m. ET November 5, 2019. Void outside the United States and Canada and where prohibited by law. Please see full details and official rules here. Sponsor: Macmillan, 120 Broadway, New York, NY 10010.