Runners and Peelers: British Policing in the Early 19th Century

Join author Cindy Anstey as she explores how the concept of a full-time police force evolved from the informal truncheon-swinging “Peelers” and “Bobbies.” The Hummingbird Dagger—Cindy’s new YA novel set in a turbulent 1800’s London as the police force is transforming—blends romance, danger, and mystery.

Research is the lifeblood of a historical writer. Not only is it necessary for accuracy but, in my mind, it is also one of the best parts of the job. Research is particularly important when our modern understanding of a system—such as a police force—is at odds with the era and setting of the book. The differences have to be explained or the reader will become confused, and, in my case, as I write YA, dealt with a light touch so as to avoid an information dump.

Our concept of how any given police force operates is derived from decades of exposure to the media. TV and movies depict the modern beat-cop or detective in a fairly consistent manner. Being a member of the police force is a public service job, protecting the citizenry and ferreting out criminals.

Such was not always the case.

A full-time police force is actually a new invention historically speaking. In England, where all of my books take place in the 19th century, a professional police force did not exist until 1829; less than 200 years ago. Part of the reason for this late beginning was the fear of citizens that the police would be used for oppression.

A gentleman, by the name Henry Fielding, established the precursor to a modern police force in London in 1749. His pioneering constables were nicknamed The Bow Street Runners after the location of the headquarters; it was a derogatory term unappreciated by the crime fighters.

Runners did not patrol a particular area but were hired to look into specific crimes. Sometimes towns or villages in other parts of the country hired them to look into and capture criminals. Treason, corruption, and murder were far beyond the scope of the unpaid village constable.

In the beginning there were only six Bow Street Runners and they arrested criminals in the authority of the magistrates. When Henry Fielding died in 1754, his brother John took over the leadership of the Force. John Fielding used a government grant to set up a horse patrol to deal with highway robbery. He published a newspaper every week that gave information about stolen goods and descriptions of criminals. Such was born the idea of spreading information to solve crimes. Runners did not have a regular salary but received payment from the courts or victims.

The Bow Street Runners continued until 1839, overlapping the founding of the modern police force in London by a decade. Sir Robert Peel formed the Metropolitan Police in 1829; these constables acquired the names of Peelers or Bobbies. They did not carry guns but used rattles and truncheons. The rattles were used to summon assistance. By 1835, all boroughs were required to form their own police force. The first branch of police detectives was formed in 1842 consisting of two inspectors, six sergeants and a number of constables.

To help the police feel less threatening to the average citizen, uniforms were designed in blue rather than red, which was seen as a military color. They wore tailcoats with brass buttons and top hats. The headquarters was originally based near Whitehall Palace with an entrance on Great Scotland Yard. This was the source of the name Scotland Yard.

The Metropolitan Police were closer to our modern concept of a police force with street patrols and a directive to maintain public order. Peelers were required to be 20-27 years of age and at least 5’7” tall, literate, fit and have no criminal history. They were not allowed to vote and needed permission to get married. Originally there were a thousand men policing a city nearing two million.

My book, The Hummingbird Dagger, is set in 1833 during the turbulent change from The Bow Street Runners to The Metropolitan Police. The opening pages take place in the imaginary town of Welford Mills where the use of village constables is still common. However, upon shifting to London, the characters are confronted by a professional police force, which was not as subject to the influences of the uppers classes and was, therefore, more willing to pursue villains irrespective of their station in life. 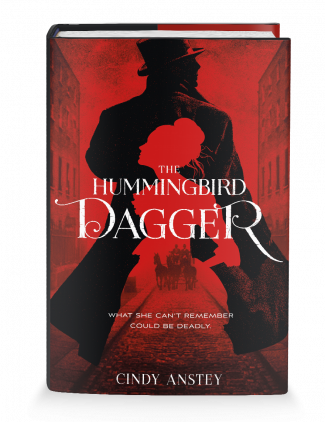 About The Hummingbird Dagger by Cindy Anstey:

1833. A near-fatal carriage accident has deposited an unconscious young woman on the doorstep of Hardwick Manor and into the care of young Lord James Ellerby. But when she finally awakens, it is with no memory of who she is or where she came from.

Beth, as she calls herself, has no identity; the only clue to her circumstances is a recurring nightmare of a hummingbird, blood dripping from its steel beak.

With the help of James and his sister, Caroline, Beth tries to solve the mystery of her own identity and the appalling events that brought her to their door. But nothing could prepare her for the escalating dangers that threaten her and the Ellerby clan. From the hazardous cliffs of Dorset to the hostile streets of London, Beth will fight to reclaim her past, hunted by a secretive foe with murderous intentions.

Comment below for a chance to win a copy of The Hummingbird Dagger by Cindy Anstey!

The Hummingbird Dagger Comment Sweepstakes: NO PURCHASE NECESSARY TO ENTER OR WIN.  A purchase does not improve your chances of winning.  Sweepstakes open to legal residents of 50 United States, D.C., and Canada (excluding Quebec), who are 18 years or older as of the date of entry.  To enter, complete the “Post a Comment” entry at http://www.criminalelement.com/runners-and-peelers-british-policing-in-the-early-19th-century/ beginning at 12:00 a.m. Eastern Time (ET) August 28, 2019. Sweepstakes ends at 11:59 p.m. ET September 10, 2019. Void outside the United States and Canada and where prohibited by law. Please see full details and official rules here. Sponsor: Macmillan, 120 Broadway, New York, NY 10010.