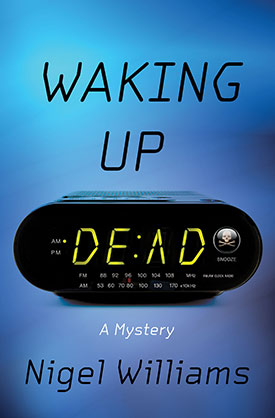 Waking Up Dead by Nigel Williams is both a screamingly funny cozy mystery and startlingly strange ghost story asking the question: What would you do if you could bear witness to your own demise? (Available August 23, 2016)

On the morning of Jessica Pearmain's ninety-ninth birthday, her eldest son—George, a retired bank manager aged sixty-five—wakes to some terrible news.

It appears that, at some point in the night, an intruder broke into his Putney home, where several generations of the Pearmain clan have gathered to celebrate their matriarch's momentous milestone, and murdered the birthday girl.

George's wife, Esmerelda, discovers her on the kitchen floor surrounded by blood and broken glass. The house promptly descends into outraged chaos. A chaos that only becomes more confused and strident when Esmerelda rushes upstairs to tell George…

Only to realize that his mother wasn't the only to die that night. It seems that George, too, has shuffled off the mortal coil and joined the choir invisible.

Which comes as something of a shock to our narrator.

The problem seemed to be that almost everyone else in the immediate vicinity seemed to think he was dead. They were pretty emphatic about it. Even if he had found a way of letting them know that he was still in there somewhere, he had the distinct impression that he would have been shouted down fairly rapidly.

He became convinced, as the morning wore on, that some of them would have been prepared to whack him over the head with a length of lead piping in order to make their point.

He was dead. That was the on dit.

While a colorful detective and several cops flood the house, George decides he'd better make the best of the situation. He has no idea why he's still earthbound or just how he died, but he comes to the conclusion that two deaths in a single night can't be a coincidence.

If his mother was done to death by a murderer, he must have been a victim of foul play, too. Perhaps his spirit has stuck around to see justice done.

Too bad he seems to be as ineffectual a ghost as he was when he was a living man.

If he was a ghost, surely he would be able to use a few traditional ghost techniques for getting from A to B and back again. Ghosts in Hollywood movies were always on the move. They were always pushing their upper bodies through brick walls, then dragging the rest of their shadowy selves after them. In one film he had seen, the bloke, although he had been brutally murdered only a few days before, was able without difficulty to join in his wife's pottery class.

He couldn't even open the bedroom door. This was bad. He was an English ghost. Was that the problem?

The detective, DCI Hobday, has his hands full with this case. The Pearmain family specializes in oddball characters; when it comes out that Jessica was worth over twelve million pounds and had left the entire caboodle to George, everyone becomes a suspect.

Perhaps it was Frigga, the younger sister—a self-professed witch, complete mess of a human being, and something of an expert on local plants (including deadly hemlock). Or, maybe younger brother Stephen, a BBC newsman with an unfortunate toupee and a recalcitrant mobile phone, is responsible…

Local doctor Nat Pinker was hiding something from George, and Jessica's lesbian friends never liked him much. Was the previous night's carousing with parsnip wine the last straw after forty years of marriage—the final embarrassment that drove Esmerelda over the edge—or is Stephen's icy and calculating wife, Lulu Belhatchett of the infamous news program Come Sit On My Knee, a cold-blooded murderer?

If Esmerelda had not toppled his mother (and her surprise this morning had sounded fairly genuine) then Lulu was certainly in the running for prime suspect, as far as the killing of a ninety-nine-year-old ex-piano teacher was concerned.

He would not have been surprised to learn that Lulu Belhatchett (she never, ever use her married name, and only soiled her mouth with George's family handle once it had been carefully disinfected with inverted commas) had put the rubbing-out of Jessica in the hands of some reliable firm of assassins, while she gave herself an alibi by slithering off to Basingstoke early yesterday evening.

Author Nigel Williams starts with a somewhat goofy premise and steadily cranks the ridiculous factor up to eleven by story's end.

Frigga (Jessica Pearmain was going through a Wagner obsession when her daughter was born) bursts into grandiloquent confessions involving bad vibes, wicked karma, and “influencing voices.” Stephen's phone lectures him in the midst of tense moments. George's long-dead dog appears—and begins talking to him. DCI Hobday and the pathologist break into spontaneous dancing at the morgue. A triple funeral turns into a slapstick routine.

Then things get really crazy.

Visualize the crazy with our GIFnotes version of Waking Up Dead!

Waking Up Dead is definitely a one-of-a-kind mystery, featuring a cast of zanies that are, honestly, all rather unlikable. The plot is rife with depressives, obsessives, sociopaths, Negative Nellies, weak-willed cowards, greedy graspers, and downright louts; even our narrator, George, was hardly a stand-up guy (back when he still respired, that is). But then, that makes them all the more human and familiar.

If we don't have a Frigga or Stephen in our family, we probably know one or two. Everyone's familiar with carefully calculated characters like the fearsome Lulu Belhatchett, pretentious snobs who believe themselves to be above other mere mortals. We've worked with useless charmers like Nat Pinker or slimy assholes like Pawlikowski.

By mystery's end, Williams has unraveled a much snarled web of multiple motivations (and even more murders), culminating in a climax that wouldn't be out of place in a Monty Python sketch. In the midst of the mayhem and slapstick, though, are some moments of deeper philosophy and serious ruminations on what it is to live (and die), making this the sort of story that's sure to linger long after the last page.

This was all about family. The lies that people told each other. The fears and hatreds that lay buried for years and, with the horrible simplification that death imposes, emerged, like a drowned city rearing up as the water receded.

He was better off dead. He really was.

Read an excerpt of Waking Up Dead here!