Review: The Unseeing by Anna Mazzola 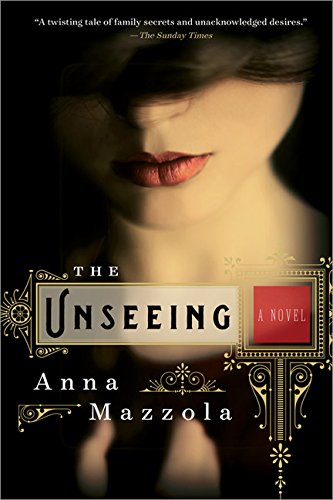 The Unseeing by Anna Mazzola is a thrilling debut based on the real case of Sarah Gale—a tense novel of human frailty and fear and of the terrible consequences of jealousy and misunderstanding.

Anna Mazzola’s debut novel, The Unseeing, spins a fictional tale around the historical 1837 murder of Hannah Brown, also referred to as the Edgeware Road Murder. The grisly crime rocked London, first when a mysterious sack was found near Regent’s Canal containing a human torso, followed by a head washing into the same channel of water, and lastly, the missing legs turning up in a culvert. Once the body was identified as Hannah Brown, policed turned their sights to James Greenacre, Hannah’s fiancé, and Greenacre’s common-law wife, Sarah Gale. The trial ended in two days, with the jury needing only 15 minutes to find them both guilty. The narrative of The Unseeing grows from the remaining question of to what extent Gale was involved and whether she was, in fact, guilty at all.

To explore the mystery behind Sarah Gale’s possible motives, Mazzola created Edmund Fleetwood, a young lawyer sent to decide on whether Sarah should be pardoned. The story is told alternately between Fleetwood and Sarah’s points of view, constructing a tale of lies, desperation, and dark secrets balanced on a fragile blade of trust. It’s up to Edmund to uncover the truth, but Sarah remains as quiet in prison as she appeared on the stand. He determines to earn her trust, hoping that in doing so, she’ll in turn trust him.

Of course, Fleetwood has privilege on his side. His job is to look at this case and determine Sarah’s fate, but to him, the real mystery is why Sarah would so willingly take Greenacre back. During their second interview, he finds the answer to his question:

“And you saw James Greenacre at the lodging house on Christmas Day, the day following the murder. Did he give nothing away?” Edmund did not say it, but it occurred to him that Greenacre must have come to Christmas dinner straight from chipping up the body. He had a horrible vision of him carving the roast.

“No, not that I noticed,” Sarah said. “He was perhaps a little melancholy, but I put that down to his having broken off the relationship with Hannah.”

“And you accepted him back immediately?”

Edmund thought about this. “Greenacre threw you and your son out of the home you shared with him a few days before Christmas so that he could marry this other woman. Then, only two days later, he inter you back to his house. Hannah Brown was gone, but all of her possessions remained. Yet you returned at once to live with him and didn’t question any of this?”

“You forget, Mr. Fleetwood, or perhaps do not understand, that my situation was precarious. I had virtually nothing to live on, nowhere to stay, and a boy to feed.” She looked at him. “You know what happens to people in my situation, don’t you? They end up in the workhouse, separated from their children. Many would sooner die.”

Yes, Edmund had read all about the workhouses: the institutions intended to punish the poor for their poverty and discourse them from seeking help. Children were kept apart from mothers, husbands from wives. Food was scant and disease was rife. You did not go into a workhouse unless you had absolutely no other choice.

“So I was grateful to have him back,” Sarah continued. “It was never what you might call an equal relationship. I’m no proud of that, but that’s the way it was.”

In Victorian England, women had no rights; finding work that wasn’t prostitution was nearly impossible, and if you didn’t or couldn’t marry well—or at all—life was anything but kind. Add a child to the mix, and your reputation was trashed. In reality, had Sarah’s sentence been repealed, she’d have been right back where she started, now with the title of murderess over her head.

I felt that Fleetwood’s point of view, in general, was overly clinical. Though his mission is sympathetic in regards to determining whether Sarah is truly guilty, his voice lacked empathy. If we’re supposed to be in his shoes, parsing out this mystery, I’d expect some internal reflection regarding his own situation and family, including what gave him this job in the first place: his father’s recommendation. Fleetwood and his father don’t have a loving relationship, but the matter of Edmund potentially being set up versus aided by his father goes by the wayside.

Edmund attempts to construct a true account of events from Sarah’s interviews and the observations of various neighbors and possible witnesses, which slows the pace of the first half of the book dramatically. I’m not one for procedural narratives, but if you enjoy gathering clues and constructing your own version of events to see if you’re right, this book might be for you.
Though the story is fictional, Mazzola did incorporate newspapers clippings from the 1837 reports to head her chapters, bridging the gap between historical context and imagination. It was a lovely addition, but I also feel perhaps more editing and research were necessary for historical context. At one point, Sarah sits in her cell, contemplating whether her corpse will be anatomized after she’s hanged. This was a real practice under The Murder Act of 1751, wherein to feed the demand of bodies for medical study, the corpses of hanged murders would be collected for that purpose. The Act was replaced in 1832 by the Anatomy Act, which ended the practice of anatomizing as part of the death sentence for murder. Because The Unseeing is set in 1837, and Sarah’s body could be claimed by her sister, there’s really no context other than gruesome musings. I study Victorian medical history, which is why this detail stuck out to me, but hey, I’m picky.

The first half of the book is rather slow and the inconsistent use of Cockney inflection pulled me out of the narrative in places, but overall, it was a decent read with a fair amount of twists and turns. If you’re interested in stories created around real-life crimes, I’d give this one a shot.