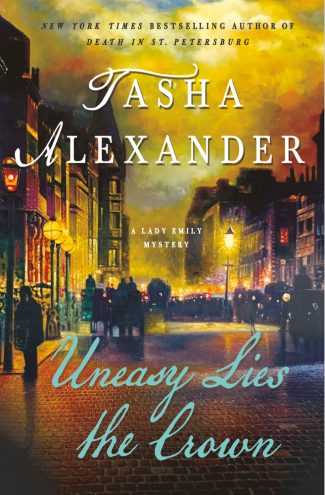 In Uneasy Lies the Crown, the thrilling new mystery in Tasha Alexander’s bestselling series, Lady Emily and her husband Colin must stop a serial killer whose sights may be set on the new king, Edward VII.

It is the year 1901, and on her deathbed, Queen Victoria has pressed a note into the hand of one of her most trusted agents, Colin Hargreaves. The baffling contents—a mere two lines of Latin—indicate little to Colin. But on the very day of her funeral, a corpse is found in the Tower of London, posed in the manner of the death of King Henry VI. After hastening from the funeral service with his intrepid wife, Lady Emily, their initial investigations lead them to believe that the murder is a threat against the soon-to-be coronated Edward VII and that perhaps Victoria had had some inkling of this when she slipped Colin that message.

While Colin pursues official channels of inquiry, Emily has other leads to investigate, which is a good thing since Scotland Yard are generally discouraging of women doing such unladylike things as looking into murders. Of course, this diminishment of female ability often means that the Yard overlooks angles that seem obvious to her, allowing her to freely interview other women on the periphery of the case and thereby discovering unsettling truths. When a second body is found, with the promise of more to come, Emily and Colin must race against the clock to catch a determined killer whose final murder could strike a blow at the very heart of the British Empire itself.

Read an excerpt of Uneasy Lies the Crown!

Interspersed with these chapters from 1901 are passages from 1415 relating the very different experiences of newlyweds Cecily Bristow and William Hargrave, beginning on the eve of his departure to fight in France under the banner of King Henry V. While quiet, religious Cecily must withstand the intrigues of court, where she is to stay under the protection of her adopted sister’s husband, William must try to survive the field of battle. Henry is an inspiring leader but the English are vastly outnumbered, especially when arrayed against the glittering ranks of the French military. Still, William knows that the English have at least one advantage:

[The French] might think the English weak, but William knew better. He and his brothers in arms would fight for their king, for their wives and sweethearts, for their land. They would fight with the strength and fury of men who knew the day would end in either glory or death. No English soldier had forgot what the French had done to the captured archers at Soissons: they cut off their bow fingers, gouged out their eyes, and gelded them before massacring them. The tales of their brutal treatment still filled William with rage. Who would not fight to the death rather than be subjected to such an ignoble end?

The way the past influences the present is but one feature of this 13th installment of Tasha Alexander’s bestselling Lady Emily mystery series. The period detail from both the 15th and early 20th centuries is wholly immersive, and most absorbing when relating Cecily and Emily’s struggles, separated by four hundred years, to make sure that truth and justice prevail. Cecily and Emily have quite different personalities but both are easy to root for, though I will admit that I preferred to spend time with Emily due to her livelier wit and greater sense of independence. Emily is a great believer in a woman’s capabilities, a stance that her husband reminds her is not shared by many in Victorian society, right up to their late monarch herself:

His words, alas, rang true. Queen Victoria had never offered even a hint of support to the women’s suffrage movement. Quite the contrary. According to my mother, her majesty had once referred to the subject as a mad, wicked folly, and she never failed to make it clear to those around her that she supported the traditional roles of man and wife. Other than for herself, of course. I have never been able to tolerate hypocrisy. Perhaps that explains the cool relations I always had with the late queen.

Emily’s arch, often irreverent, sense of humor is but one of the many charms of Uneasy Lies The Crown, which delves not only into English royal history but also into the injustices of life in England at the turn of the 20th century. It provides quite a bit of background as to Colin’s family history but still serves as a great jumping on point for new readers to the series.