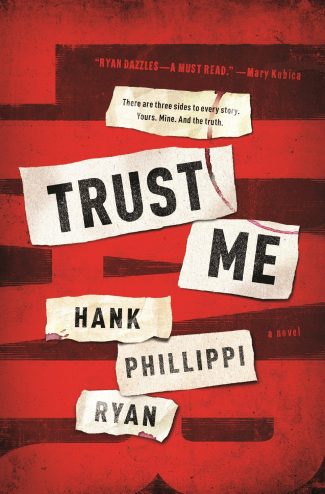 Trust Me by Hank Phillippi Ryan is a chilling standalone novel of psychological suspense and manipulation.

Hank Phillippi Ryan is a literary luminary by any standard. With 10 books to her name, she’s racked up an impressive array of accolades: five Agathas, two Anthonys, the Daphne, and a Mary Higgins Clark Award. She’s also a veteran on-air investigative reporter for Boston’s WHDH-TV and has won 34 Emmys, 14 Edward R. Murrow Awards, and dozens of other prestigious honors for her journalism. Both careers have been personified by passion and persistence, and her latest endeavor marks yet another noteworthy achievement: the transition from series (the Charlotte McNally and Jane Ryland sagas) to standalone with Trust Me.

As Trust Me opens, readers are introduced to bereaved Boston journalist, Mercer Hennessey, who has put her career on hold in the aftermath of an auto accident that killed her husband, Dex, and young daughter, Sophie. Reclusive by choice, she is tempted to take her first tentative steps back into the immersive world of work when her former editor, Katherine Craft, offers her the opportunity of a lifetime: to write a blockbuster book chronicling the trial of party mom Ashlyn Bryant, accused of killing her two-year-old daughter, Tasha Nicole. Fifteen thousand dollars up front, fifteen thousand more upon publication, hefty royalties, and the promise of an instant bestseller—provided the jury delivers a guilty verdict. Despite feeling that she’s capitalizing on someone else’s tragedy, Mercer agrees.

Katherine arranges for video equipment to be delivered to Mercer the following Monday morning so that she can watch the live trial feed from the comfort of her home where she’ll begin shaping their “instant book.” The case—known as “Baby Boston,” after the child who was found dead in the harbor—quickly begins pushing Mercer’s personal buttons; how could a mother make the decision to kill her child? Consequently, her loathing of Ashlyn Bryant is compounded by the grief of her own loss. But as the trial commences, Defense Attorney Quinn McMorran (a former colleague of Mercer’s deceased husband) begins to put some dings in the state’s case, which is largely circumstantial despite an overwhelming presumption of guilt. Could this possibly equate to reasonable doubt?

To reveal more would risk spoiling the story, which has more twists than a Shonda Rhimes teleplay. What can be said is that Mercer and Ashlyn do have occasion to come face to face and that each is dependent on the other for … something. The book is divided into distinct parts and unfolds through Mercer’s perspective—a startlingly intimate viewpoint and one that underscores themes of truth, perception versus reality, and the power of subjectivity. Consequently, one would be wise to consider potential biases and how these might inform the tale’s telling. After all, “truth” is largely dependent on the teller. Manipulations and motivations abound, then, leaving readers as off balance as Mercer herself. Introspection is eventually offset with action, ensuring that the thrills aren’t solely cerebral.

Beyond machinations of plot, readers will undoubtedly find parallels to the real-life Casey Anthony story (which the author references throughout)—a child’s mysterious and protracted disappearance, the disputed manner of death, the alleged involvement of a (mythical?) caretaker, strained family relations, the poisonous effect of rumor and innuendo, and the ensuing media frenzy among them. But Ryan brings both authenticity and originality by virtue of her intimate knowledge of investigative journalism and the complicated ethos of reporters whose ultimate duty is to the truth (whatever that may be). Further, her familiarity with the criminal justice system (she is married to a defense attorney; the book is dedicated: “For Jonathan, and Justice”) elevates those aspects of the story beyond a superficial rendering.

Trust Me is a taut psychological thriller that puts a fresh, fiendish spin on the unreliable narrator gambit—an accomplishment in and of itself. Hank Phillippi Ryan has taken a bold step beyond the confines and comforts of her series fiction yet maintains—even arguably surpasses—their threshold of excellence. While this book was made to stand alone—and does so quite admirably—it is also a worthy addition to the author’s ever-evolving arsenal. And that’s the absolute, unequivocal truth.

Read an excerpt from Trust Me!