Review: The Trial and Execution of the Traitor George Washington by Charles Rosenberg 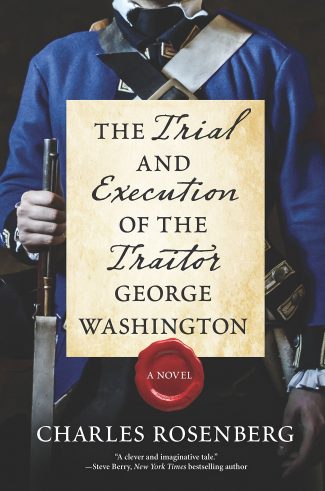 The Trial and Execution of the Traitor George Washington

The Trial and Execution of the Traitor George Washington by Charles Rosenberg is a thought-provoking novel that imagines what would have happened if the British had succeeded in kidnapping General George Washington.

Colonel Jeremiah Black arrives on America’s shore in 1780 with no idea if he will succeed in his mission: to capture George Washington. Getting to the Continental Army’s general is no small feat, even if Black had unlimited time and resources—which he does not. Black has a tight window, with only eight days to capture a formidable foe and return with him—alive—to the ship bound to take them back to England. Weather, rebels, and even Loyalists conspire against Black.

This Kings Guard officer is nothing if not flexible on his feet, however. He bluffs and fights his way through several hairy incidents until he reaches his target. With the help of several Loyalists, Black snags Washington and, for our purposes, changes the course of history. The events that follow won’t be found in any social studies textbook.

Charles Rosenberg’s The Trial and Execution of the Traitor George Washington charts a creative alternative-history tale filled with action, adventure, and twists. It starts with Jeremiah Black’s exploits in New York and travels half a world away to London, where George Washington is put on trial.

The whole adventure begins with Jeremiah Black, a colonel of the King’s Guard. Black is given only part of his mission—that way, if he were trapped, he wouldn’t be able to give the rebel Continental Army any actionable information. Rosenberg does a good job of developing the several mistrustful elements present during the Revolutionary War. Spies were everywhere. Double agents were not uncommon. So when Black comes ashore, he is distrustful of everyone—even the people he’s supposed to trust. It requires him to be flexible and quick-thinking. He lies with a certain grace, and he’s a resourceful fighter.

During the first part of his mission, his new Loyalist partner, Horatio Stevens, insists that Black remain unarmed. (Distrust is a two-way street.) Then, Stevens is killed in an ambush. And now, the unarmed Black must face the assailant:

The man looked around, stopped, stared directly at the trees where Black was hiding and began to gallop directly towards him, holding the reins in one hand and the knife aloft in the other. Black broke off a stout, dry branch from a tree and rode out of the copse, spurring his horse ever faster. As the man bore down and they were about to pass each other, Black swung the tree branch like a cudgel, aiming for the man’s midsection but then, at the very last second, flipped the branch upward and connected instead with his head.

He heard the sharp crack of the man’s skull breaking, followed almost instantaneously by a sound like a stick squashing a plum. The man fell onto the trail and lay there, twitching, brains oozing from his shattered head and blood pouring out of his mouth.

Black’s creativity and focus lead him straight to the object of his mission: George Washington. Which brings us to what is probably the most entertaining part of any alternative history—reimagining what real historical figures would do when confronted with imaginary circumstances.

Rosenberg obviously did his homework on Washington; the first president’s manner and physical characteristics are well-drawn. Washington’s behavior is depicted in a way consistent with his contemporaries’ descriptions. Calm in general, polite almost always, but with a temper that could flare up despite his best efforts to control himself. Physically intimidating at six feet, four inches tall or so, Washington inspired loyalty, and his presence demanded a certain respect—as evidenced by Rosenberg’s portrayal.

Here is Captain Ingram’s (the captain of the vessel taking Washington to London) first encounter with Washington:

When they walked in, Washington was sitting in a chair at a small table, eating. He was wearing his uniform, which had been restored to a semblance of clean. He looked directly at Ingram’s shoulder boards, where his commander’s rank was displayed, and wobbled to his feet.

“Good morning, Captain,” he said, and said nothing more, clearly waiting, Ingram thought, for him to initiate a salute to acknowledge Washington’s superior rank.

“Before I salute you, sir, please tell me who you are.”

“General George Washington, Commander-in-Chief of the Continental Army of the United States.”

“I suggest you enquire of Colonel Black, who I now seem to recall capturing me, and I am told is on this ship.”

A voice from the doorway said, “I captured him at his headquarters. Unless they were using a double, he speaks the truth as to who he is. But I see no reason to salute him, Captain. His army is not the army of a country recognized by anyone.”

A wry smile swept across Washington’s face. “Unless, Colonel Black, you don’t consider France to be a country. They recognized my country three years ago.”

Ingram glanced briefly at Black, looked back to Washington, raised his hand to his forehead and saluted. “Welcome aboard, General. Unfortunately, you are a prisoner, so we will need to establish some rules of conduct while you are aboard my ship.”

Obviously, many more historical figures take their place on this alternative-history stage. Both American forefathers and British personages take part in Rosenberg’s story. The student of history will find much to recognize but won’t be able to predict the course of events.

The Trial and Execution of the Traitor George Washington by Charles Rosenberg breathes fresh life into the sometimes stagnant annals of history. The reader will come away hard-pressed not to feel the consequences of these fictional events. But sometimes, perhaps, to get the larger picture, the picture must be altered.