Book Review: The Temptation of Forgiveness by Donna Leon 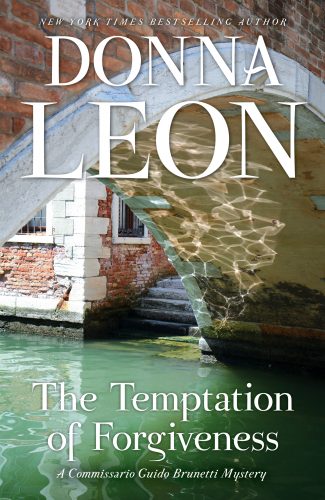 The Temptation of Forgiveness

The Temptation of Forgiveness by Donna Leon is the 27th novel in the bestselling Commissario Guido Brunetti mystery series, where a suspicious accident leads Brunetti to uncover a longstanding scam with disturbing unintended consequences (available March 20, 2018).

In this 27th installment of the Commissario Guido Brunetti mystery series, our hero—a detective in the state police force stationed in Venice—is approached by a friend of his wife Paola’s. Professoressa Elisa Crosera is concerned about changes in her 15-year-old son’s behavior and suspects they may be due to drugs. She wants Brunetti to investigate who might be selling drugs to kids at Sandro’s school, but she doesn’t have any actual proof or leads.

Brunetti is too polite to tell her that adolescent boys tend to go through periods of off-putting behavior that isn’t necessarily illegal or immoral, but he does promise to look into any suspicious drug activity around the Albertini, the private school in which both of Crosera’s children are enrolled. To do so, he must make inquiries with a somewhat unusual contact whom he discusses with his colleague and friend, Commissario Claudia Griffoni, in a conversation that is extremely illuminating of the Italian way of life:

‘Will he tell you?’ Griffoni asked.

Brunetti nodded. ‘A long time ago, my brother wrote a letter of recommendation for his son, who was applying for medical school in England.’

‘Radiology. My brother’s chief technician at the hospital in Mestre. The boy worked with him for two years: he said he was the best assistant he ever had. Why shouldn’t he write him a reference?’

‘He’s Assistant Chief Radiologist in a hospital in Birmingham.’

‘And the father pushes drugs?’ Griffoni asked in bewilderment.

‘And the father pushes drugs.’

While Brunetti treats the case with the seriousness he does all his investigations, he doesn’t think it much above the level of petty crime—until a man is found unconscious in the dead of night after what looks like a violent altercation at the foot of a bridge. When Brunetti recognizes the man as Tullio Gasparini, Crosera’s husband, he begins to wonder if there isn’t more to the drug case than even he—with his realistically dim view of humanity—suspected.

Brunetti’s investigations into the assault and the drug dealing soon lead him down paths as narrow and winding as the streets of Venice itself. Donna Leon reveals to us a city of splendors and squalors, with inhabitants who are kind and grasping and unselfish and prejudiced, sometimes in quick succession. Above all, her people are alive in all their greatness and smallness. It’s easy to believe that these are less characters than actual people—a storytelling feat.

The Temptation of Forgiveness also continues subplots from previous novels, including Brunetti’s strained relationship with his direct superior, Vice-Questore Patta; the ongoing battle of wills between Lieutenant Scarpa and the resourceful secretary/secret tech whiz Signorina Elettra; and perhaps most charmingly, the relationships in Brunetti’s own little family. The scenes of domestic happiness, with the occasional gentle conflict—he and Paola have two teenage children, after all—serve as soothing interludes in all the discussion of vice and criminality.

But even at home, even when relaxing, it’s hard for Brunetti to escape his work. Reading Antigone for pleasure only serves to reinforce the idea that not all laws are created for the public good—some might serve only the interests of power. As he navigates the complexities of his cases, he has reason to wonder at the rightness of Antigone’s cause—seeking to bury her brother despite the dictates of the tyrant—and how that sort of conviction has disturbing parallels to what he’s coming across in his own investigations:

Antigone was obeying her own law. He turned the page and found her words: ‘But I will bury him. And if I may die because of it, I say that this crime is sacred.’ His hands sank to his lap and he sat, book abandoned, and tried to think of what it would be so to value your sense of what is right, or whatever you chose to call it, as to perform a ritual you believed to be necessary, knowing that your death was the inescapable result of doing so. Brunetti believed he would die for a person: his children, his wife. But for an idea, a rule?

The Temptation of Forgiveness is a lovely meditation on the rule of law, set in an exquisitely rendered Venice that is at once modern and timeless. I’m honestly not sure how I felt about the ending, given everything that led up to it, but as with life, it is impossible to make everyone happy all the time. This bittersweetness of reality detracts little from Ms. Leon’s work and only enhances her continuing portrait of the City of Canals.