Review: The Royal Art of Poison by Eleanor Herman 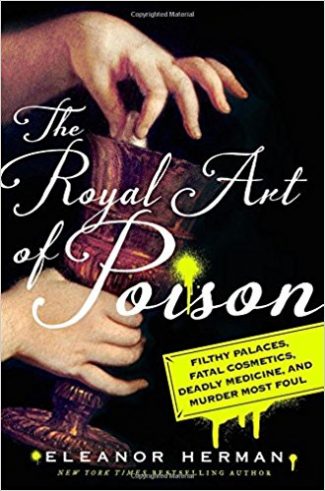 The Royal Art of Poison

The Royal Art of Poison by Eleanor Herman is a work of pop history that traces the use of poison as a political―and cosmetic―tool in the royal courts of Western Europe from the Middle Ages to the Kremlin today.

As a child, I had a toy plague rat that had come with a book called The Measly Middle Ages. My love of learning about the weird and macabre elements of history has a well-established history all its own, so The Royal Art of Poison is perfect for morbid-minded me. I’m rather certain I would have enjoyed this book as a child just as much as I have enjoyed it now.

Eleanor Herman writes of gruesome events with wit and style. I found it engaging and descriptive—a rarity in the nonfiction genre. It’s truly a delight for history fans and writers alike. The Royal Art of Poison is a fantastic resource with a bulging bibliography and a wonderful little dictionary in the back matter. She opens with this glorious paragraph:

Imagine a king casting his gaze over a feast of roasted meats, rich sauces, glazed honey cakes, and fine wine. Even though his stomach rumbles with hunger, he might lose his appetite when considering anything on the table could, in fact, cause him to die horribly over the next few hours.

It’s no great surprise the lengths royals went to in order to avoid or cure poisons. Delving into the gritty details, we start with a brief overview of the sheer volume of poison in all its forms throughout history. I was unsurprised by the more famous purveyors of poison, namely the Medici. All sorts of bizarre and (to our modern science) nonsensical antidotes and poison preventatives are detailed lavishly. The accidental successful antidotes described were just as fascinating as their mind-boggling missteps. Firsthand accounts are interspersed here and there from the journals of physicians and alchemists, adding a deeper perspective on their thoughts and lives. These were people whose mistakes could end not only the life of their royal patron but their own life as well. They would try anything and everything in an attempt to stave off poisons and even the suspicion of poison. According to Ambroise Pare:

We recognize that a man has been poisoned, no matter in what way, when he complains of a great weight throughout the body, which makes him displeasing to himself; when the stomach gives some horrible taste in his mouth, entirely different from that derived from ordinary meat, no matter how bad it may be; when the color of the face changes, being either livid or yellow, or another strange tint, and deformed; when he complains of nausea and the desire to vomit; when he is possessed of an uneasiness of the entire body, and it seems everything about him is turned upside down.

Part One also covers medicine, skirts over cosmetics, and shows the true plethora of poisons that occupied the lives of our forebears. (Though, should you open up your cleaning cupboard, I’ve little doubt poisons lurk there as well.) From unicorn horns (narwhal tusks) to stones from the stomach of goats, poisonous makeup, mercury cures, and even the occasional bit of human flesh, there’s a treasure trove of weirdness to dive into and learn about.

While the first part of the book covers poisonings in a more general sense, Part Two dives into the stories of royal personages who may or may not have been poisoned. Herman provides what evidence there is while also weaving the narrative together in a heartfelt fashion. There’s a closeness in the way the stories are told that makes them feel far more personal.

There are tales of young kings cut down before they could prove themselves—like Edward VI, who was rumored to have been poisoned but was far more likely to have died of an illness. That said, some of those royals, royal mistresses, and famous personages were poisoned, and it’s well worth reading to find out more.

The final section of the book breezes through the arsenic-saturated Victorian era and touches on the more modern poisoners, capping off the tales of the past with a reminder that poison still touches our lives to this day. Though poisonings are not as prevalent as they once were, there are still those who use poison and the threat of poison even now.

Herman has written a solid, informative book, clearly delighting in her subject matter. It’s grotesque but fascinating and a welcome addition to my reference shelves. I look forward to further nonfiction works by Eleanor Herman.