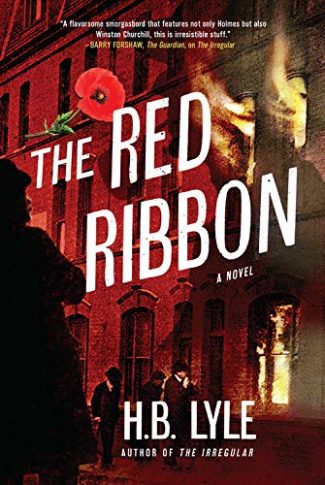 In The Red Ribbon by H. B. Lyle, Captain Vernon Kell’s fledgling secret intelligence service faces being shut down before it has even begun its job of saving the British Empire from German and Russian spies.

The spring of 1910 was a turbulent time in England. King Edward VII died on May 6 and George, the Prince of Wales, ascended the throne. Long live the King. The funeral of a monarch is an immense gathering, bringing together foreign royalty, political leaders, and throngs of patriotic citizens. Captain Vernon Kell is tasked by his ambitious superiors to ensure that London doesn’t erupt in violence during the funeral ceremonies for the late king. He’s assisted by Wiggins, one of Sherlock Holmes’s famed Baker Street Irregulars. Holmes, aka GOD (The Grand Old Detective), trained Wiggins in the art of surveillance when Wiggins was a London street urchin. Years later, Wiggins is Kell’s right-hand man; “smart, ruthless, and able to blend in with the hoi polloi.” He’s a master of disguises, able to surveil anyone without their knowledge.

Wiggins changed caps. He stuffed the flat cap in his pocket and unfolded a sharply peaked tweed number from his inside pocket, all without breaking stride. His right leg swung round in an awkward limp because of the pebble hidden in his shoe.

The two men in front of him talked loudly, seemingly unaware of their tail. Wiggins kept his eyes fixed on the taller of the two. He wore a straw boater, set at a jaunty angle, and his side whiskers were a shocking red. At almost six foot, thin and angular, he was a Swan matchstick of a man.

H. B. Lyle has a knack for historical accuracy—the Swan matches brand goes back to 1883 and by 1910, ‘Swan Vestas’ were heavily promoted and very popular. Also adding to the verisimilitude of The Red Ribbon are believable historical walk-ons, like that of Winston Churchill and Sir Edward Grey.

“No, no. Gentlemen make the best agents. Men of honor, men of breeding, men of character. This current scenario is the only one when such a man as OO really has any use.”

If gentlemen make the best agents, why is it that Wiggins was so easily able to tail Mr. Swan and his companion? Cumming’s disrespect for anyone who isn’t a member in good standing of the “king and country” elite is a theme of The Red Ribbon. Kell is instructed to uncover the source of “high-profile leaks from the government,” and even though Wiggin’s street smarts are vital to the case being solved, Kell and Wiggins methods of investigation are thwarted, almost rising to the level of subversion, by their colleagues.

Kell and Wiggins are so different. Kell is Eton-educated while Wiggins is a graduate of the University of Hard Knocks. Kell is not above using blackmail—on his co-workers and rival departments—to protect his turf while Wiggins shows unusual delicacy and restraint in pursuing his aims. Wiggins has better morals than his superiors: he is unwilling to use fellow citizens as pawns to achieve a higher end. But the toffs, their leadership “bred in the bone,” are a more cynical and pragmatic lot. It’s a continuing but not surprising source of tension in The Red Ribbon. Another strand of unrest is the increasing militancy of the suffragists. Kell’s wife, Constance, is one, much to his consternation, because her activities have come to the attention of the police. Kell thinks ruefully, “attracting the interest of Special Branch was most troubling—for her, for him, for his career.”

The tumultuous times roil with competing societal forces. The working class (some just one generation away from dire poverty), the emerging middle class, and the ruling classes, long accustomed to the corridors of power, all vie for their slice of the pie. H.B. Lyle melds mystery and history with a delicate touch: readers will look forward to Kell and Wiggins next adventure.