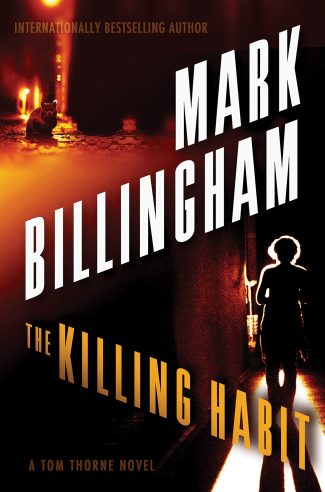 I am a huge fan of Mark Billingham’s work, and DI Tom Thorne is one of the best creations to ever come out of suspense fiction. So when another book comes out, I’m first in line. The Killing Habit finds Thorne back in homicide after enduring an interminable demotion in uniform. However, when his boss, DCI Brigstocke, presents him with a new assignment, he’s less than thrilled. A lot of cats have been turning up dead and mutilated, and Brigstocke senses that more than just dead cats will start turning up if they don’t get on it. It also doesn’t help that the public outcry has been strident. After all, pets are like family to most people. And of course, Tom feels a pain about the suffering of innocent animals. And of course, animal murder can lead to human murder.

It has long been the received wisdom that the corpse-littered career path of the common or garden serial killer—despite the fact that there was no such thing—more often than not began with the killing or torture of animals. Cats, dogs, birds. Together with fire-starting and persistent bed-wetting beyond the age of five, it was one of the telltale traits that made up the so-called Macdonald triad: a set of three behavioural characteristics suggested by an American psychiatrist in the early sixties that might help to identify nascent serial offenders.

With this in mind, Thorne heads off to Kentish Town station to coordinate with the police force he’d be working with on the case, knowing he’d have to do a bit of political maneuvering when it comes to DS Simon Fulton. Anyone that’s familiar with this series already knows how much Thorne hates political maneuvering, but it comes with the job.

Thorne also makes contact with a very attractive profiler, Dr. Melita Perera, who has been working with Kentish Town on the case. It’s obvious to them both that whoever is killing the poor cats might move on to other kinds of killing, but Thorne thinks it’s possible that the person has already killed humans and is using the cat murders as a cool-down from the main event. Creepy, huh? Luckily, Thorne will have the help of DI Nicola Tanner, who’s working her own case—and working through her own demons, namely the recent, gruesome death of her partner, Susan. In return, she’s made Thorne promise to give her a hand in the case of a drug addict who may be involved in a murder.

Interspersed with their investigations are creepy passages that are presumably about the killer. In fact, the book opens with one:

Victims had never been hard to find, quite the opposite, but still, each night’s work needed to be treated with caution. Best laid plans and all that. There were basic measures that needed to be taken, things to steer clear of, cameras and that sort of carry-on. He was no expert when it came to forensics, but he knew enough to avoid leaving any sorts of traces. The gloves were thicker than he would have liked, but that couldn’t be helped. It took away some of the feeling in the end, which was a shame, but he wasn’t going to risk getting scratched, was he?

Enough feeling, though. There was always enough left, and each time it was as though things were starting to … even out inside him.

A lifting, of sorts.

As Tanner and Thorne investigate, they begin to research unsolved murders in the general area and realize that a few of the victims may be connected by a matchmaking site. As they run down the clues, the body count grows, and Tanner and Thorne realize they’re up against the clock. It doesn’t help that Thorne is having trouble at home with his cop live-in girlfriend, Helen. Her sister is causing some friction, and Thorne feels like he’s waiting around for a shoe to drop.

As usual, Billingham’s procedural elements are meticulous, and the personal and professional lives of his richly drawn characters are a staple of his novels. I dare you to figure out who the killer is. The twist is a fun one, and the confrontation at the end will leave you breathless. It’ll probably also make you cringe, but in a good way.

Billingham has never been one to shy away from the creep factor, but aside from the cat killings, this is one of his tamer stories—though, that’s not a bad thing. The world that these characters live and work in is a fully realized one, and although this is the 15th book in the series, new readers shouldn’t be afraid to jump in. If you are a new reader, be prepared to go back and binge on the rest of the series when you finish, though. Thorne shows no sign of slowing down, and I’ll follow him wherever he goes.