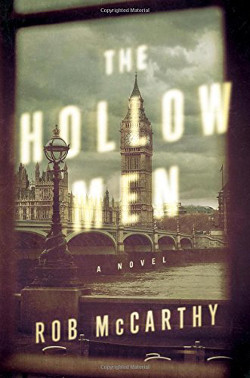 The Hollow Men by Rob McCarthy follows police surgeon Harry Kent, who's determined to help those the world would rather brush aside, in a smart and electrifying new crime series that evokes the often-hidden medical world of the London Metropolitan Police.

Dr. Harry Kent has been performing low-risk functions such as psychological assessments for the London Metropolitan Police that have kept him far from harm’s way—up until now. Called in because the police are shorthanded, he finds himself being given a Kevlar vest and asked to walk past a perimeter of snipers to negotiate with Solomon Idris, who has taken eight people hostage at a fast food restaurant. He's understandably nervous as he makes a mental comparison with his combat past.

A familiar feeling was coming back to him, one that he hadn't missed. But it had been different when he'd been in the field—he'd been a cog in a machine, whether in the safety of the hospital at Bastion, behind dozens of security circles, or darting out of the back ramp of a helicopter with a platoon of Royal Marines to take the heat for him. There, he'd had a mission, something he could focus on to ignore the flying bullets. The kid in front of him with three limbs blown off and half of his circulating volume soaked into the dust.

Here, though, it was just him and a seventeen-year-old boy with a gun. The one who was really in charge of the situation, whatever the Met said.

A tension-filled, on-the-scene checkup of Solomon reveals the young man is close to respiratory failure. He urges Solomon to follow him to a hospital, but the desperate man is only interested in a lawyer and talking to the BBC. He cryptically mentions the name Keisha and that “they” had killed her. Before the good doctor can learn any more details, one of the “trigger-happy pricks,” as Harry coins them, takes down Solomon, ending the standoff but leaving the mystery of what the hostage situation was all about unresolved.

In the critical care ward, Solomon's life ends up in danger again, and Harry's investigation puts him at odds with an old colleague and thugs who play hardball.

The first punch came straight into the side of his face, sending him staggering towards the front door of his apartment block. The next blow, a kick to the soft of his abdomen, put him down. Hands on his hand, going for the phone. Harry let it go. The deliveryman grasped the phone with his leather glove, and stepped over him. He relaxed his muscles, waiting for another blow, but it didn't come. He arched his back, scrabbled backwards across the ice-covered tarmac.

We are living through an era of CSI and medical narrative glut. TV shows and books alike are swimming in a sea of stories mired in laborious scientific techniques and analysis. What had once been an exciting new direction in crime fiction a couple of decades ago is now tedious to the point of longing for “where have you gone Quincy and Dixie McCall?” simpler times. That being lamented, let’s make room for Dr. Kent because, though he occasionally gets himself bogged down in the specifics of his profession (the saving Solomon's life is in exhaustive detail), author Rob McCarthy—who is a medical student in his fourth year—keeps it, for the most part, readable to the layman.

A first in a series that is well worth your time, and I'm very much looking forward to the return of Dr. Harry Kent.