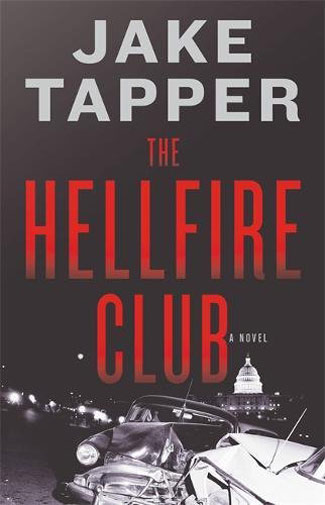 The Hellfire Club by Jake Tapper is the debut political thriller from CNN’s chief Washington correspondent and the New York Times bestselling author of The Outpost.

When you wake up at dawn still in your tux and sprawled on the banks of a creek with a “mouthful of mud” next to a dead woman and a crashed car, you’re not in Kansas anymore. Or, in the case of freshman GOP Congressman Charlie Marder, you’re far away from opining on the Founding Fathers at a lectern at Columbia University. This murky opening scene foreshadows the treacherous shoals ahead for former professor Marder in this prescient political thriller.

Like the goings-on at the present-day Gridiron Club, Marder’s 1954 D.C. world is off-the-record. Eisenhower and the giants of the Senate and House populate The Hellfire Club. Even though Marder is the son of a prominent politician, when he’s appointed to a congressional seat “after his predecessor died mysteriously,” he’s ill at ease in the corridors of power.

The self-satisfaction was almost like a physical presence in the theater lobby, a distinct mélange of aromas exclusive to the halls of power—high-priced perfume and expensive hors d’oeuvres, top-shelf liquor and freshly minted cash. It all billowed into a rich toxic cloud that made Charlie Marder’s throat constrict.

Charlie generally prided himself on his ease in social settings, but tonight he was on edge, feeling oddly exposed while he waited for Margaret to return from the powder room.

Margaret is his zoologist wife, a woman with her own aspirations who is somewhat reluctant to leave her academic life in New York City behind. Tapper doesn’t insert modern sensibilities into The Hellfire Club, rather he reminds readers that there have always been ambitious, talented spouses in D.C. making career compromises as they juggled family and career.

The Marder’s chit-chat shines an inside-the-beltway spotlight on the politicians that surround them. Compromise and slippery slopes are a feature, not an exception, of the personal choices famous folks make. Take the Kennedys. Margaret has heard things.

She watched the Kennedy brothers, a blur of hair and teeth, as they greeted well-wishers. She leaned closer to her husband and lowered her voice when she said, “Speaking of rumors, I heard quite a few about Jack from the nurses.”

The rumors disappoint her as she had thought Jack “was presidential timber,” whereas Charlie points out that “if he’s really presidential material, one expects a certain sangfroid.”

Margaret looks askance at her husband. “You’re actually making the argument that presidential timber requires a willingness to commit adultery. As if it’s an asset?

“Not an asset per se.” Charlie smiled, lighting a cigarette. “How would Aristotle put it? All men who cheat are bastards. All presidents need to be able to be bastards. Therefore, all presidents should cheat!”

The ultimate aphrodisiac in Washington isn’t sex but power, as Charlie quickly discovers. His freshman “mistake” is voting against the wishes of a powerful committee chairman, a decision based on Charlie’s knowledge of faulty equipment in World War II.  Margaret, ever perceptive, notices Chairman Carlin’s “cold look of disdain” and asks, “Did you kill his puppy or something, Charlie?” Standing in opposition to the leadership cannot stand and thus begins the seduction of Charlie. Friendly overtures from older politicians, invitations to select card games, all accompanied by drinks poured with a heavy hand and served by lovely young women swathed in “Arpège … By Lanvin.” No wonder Charlie starts feeling “woozy from the booze and the bullshit and the conversational whiplash.”

Jake Tapper recreates the atmosphere so skillfully: Frank Sinatra sings I’ve got the world on a string, sittin’ on a rainbow, the newspapers speculate about DiMaggio and Monroe, and politicians talk and scheme and maneuver. Be a fly-on-the-wall to the casual utterances of Lyndon Johnson, Sam Rayburn, Roy Cohn, Joe McCarthy, Margaret Chase Smith and so many more. The overheard tendrils of conversation are mesmerizing.

Let’s just say my respect for the congressman knows no bounds.

If the court rules to desegregate, it’s going to get ugly.

No, I don’t hate musicals. I just don’t understand them. Why would people break out in song? And even suspending disbelief, the songs are seldom any good.

When Charlie’s new acquaintances introduce him to The Hellfire Club, his life takes a downward spiral. He misses his zoologist wife desperately. She’s pursuing her academic research—the wild horses of Nanticoke Island—on the Maryland Shore. Here, as is often the case in The Hellfire Club, Tapper fictionalizes history slightly. Fortunately, all these shifts are annotated in the comprehensive source notes, which make fascinating reading.

The congressman has friends as well as enemies. He runs into Maine Senator Margaret Chase Smith on the train to NYC and tells her, “I don’t think I understood until recently how tough it is to stand up for what’s right in politics.” Her independent advice doesn’t disappoint.

“When a rat pokes his head up from a sewer, he needs to be hit on the head with a shovel immediately. You cannot just sit back and think, Well, it’s just one rat or That’s somebody else’s problem. Because it’s never just one rat, and it eventually becomes your problem.”

To say more would unravel the intricate plot, but here’s hoping this is the first in a series of political thrillers from Jake Tapper. More Congressman Marder and his zoologist wife Margaret, please!