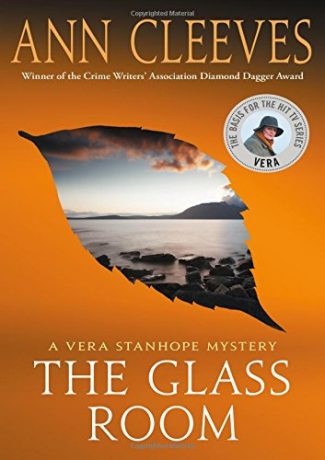 From CWA Diamond Dagger Award winner Ann Cleeves comes The Glass Room, the fifth book in the Vera Stanhope series, published for the first time in the US.

The Glass Room is the fifth book in Ann Cleeves’s Vera Stanhope series. Since 2011, Detective Chief Inspector Stanhope has been portrayed by actor Brenda Blethyn in the popular ITV series Vera. What is it about Vera that keeps readers (and viewers) coming back?

She’s dead honest with herself. When she comes home to her remote farm one October evening, laden with grocery bags, her door is unlocked.

No way would she have gone to work without locking it. She’d never believed all the romantic crap about it being safe for country folk to leave their doors open. The rural communities experienced crime too.

What the hell? Her hippie next-door neighbor, Jack Devanney, is sitting in front of her fire with “tears running down his cheeks.” Vera is no Mother Teresa: “What the shit do you think you’re doing?”

Her innate self-honesty has Vera quickly remembering times that “Jack and Joanna had dug the snow from the track so that she could get down the hill to work,” nights she’d pilfered a homebrew or two from their house, and “evenings of good food” and laughter. Jack doesn’t know where his partner Joanna has gone—will Vera “make sure she’s safe?” Why didn’t Jack call Tommy Wooler’s taxi firm, the only one “within ten miles of the farm,” which everyone used?

And why had she agreed to do as Jack asked and chase around the county looking for Joanna? Because I’m soft as clarts. Because I enjoy happy endings and want to bring the couple together again, like I’m some great fat Cupid in wellies. Because it would be bloody inconvenient living here without them next door.

Clarts? Free Dictionary says, “dialect Scot and Northern English lumps of mud, esp on shoes.” The setting of the Vera Stanhope stories—Northumberland, England’s northernmost county—lends itself to regional dialect. Note also Vera’s unsparing description of herself: “great fat Cupid in wellies” is one of her milder self-portraits.

The old chestnut what’s sauce for the goose is sauce for the gander doesn’t seem to apply to Vera. Why should being a neighbor to a copper entitle one to individual attention? Vera’s straightforward about how pissed off she’d be if one of her team pulled a similar stunt.

God, Vera thought, if any of the others considered doing this—going freelance, playing the private eye—I’d give them such a bollocking.

But it doesn’t stop her. Vera calls Tommy before he heads for “the Percy Arms in Sallyford.” He gets his back up, but when she flatly says, “You picked up Joanna Tobin two days ago,” he says, “Aye, that’s right.” The follow-up is classic Vera:

‘Where was it you took her?’ As if she knew really, but it had just slipped her mind.

Tommy didn’t care any more. He just wanted to get out to the pub.

Vera is an excellent interrogator, dissembling and weaving until she ferrets out all the facts. Tommy took Joanna to a spot “in the middle of nowhere.” The Writers’ House, “Howick way,” just inland from the North Sea. When Vera checks out the site, she’s bemused by the current course: “Short Cuts. The art of the contemporary crime short story.”

Cuts, Vera thought, Very witty. You could tell they’d be good with words. She had just clicked onto the link when she heard footsteps outside her office: her sergeant, Joe Ashworth, dead on time for their daily morning meetings. She turned off the PC, feeling faintly guilty without really understanding why.

Faint feelings of guilt notwithstanding, Vera takes some personal time for her solo investigation. “She felt the wonderful liberation of a truant,” as she takes in views of the bay and steep valleys. The setting of the Vera Stanhope novels in the “windswept coastal villages and rolling moors of Northumberland” is another hook for dedicated readers.

Vera finds the writer’s retreat and—surprise, surprise—she’s just in time for murder. “Academic, reviewer and arts guru” Professor Tony Ferdinand is dead. A woman was discovered outside the glass-walled “first-floor conservatory” where he was killed with “a knife in her hand.”

‘Very convenient.’ Bugger, Vera thought. So it was back to working the boring stuff, the pathetic druggies and the drug brawls, just when she’d thought there might be something more exciting to sustain her interest.

There’s no lack of excitement when Vera learns it’s Joanna Tobin who was spotted with the knife. Joanna says emphatically that it wasn’t her that killed Ferdinand. Vera calls her sergeant, catching him on his way home to his birthday tea.

‘I’ve got a birthday treat for you, lad.’ And he listened as she talked about the murder, recognizing her excitement. Hearing too his wife’s voice in his head: That woman’s a ghoul – the delight she takes in other people’s misery.

Vera does take transparent delight in her work. She’s in her element with a dead body and a crime to be solved.

Deep down, everyone loved a murder almost as much as she did. They loved the drama of it, the frisson of fear, the exhilaration of still being alive. People had been putting together stories of death and motives for killing since the beginning of them, to thrill and to entertain.

Readers are fortunate that Ann Cleeves writes stories that “thrill and entertain” us. Where the humorous, self-deprecating, occasionally bawdy Detective Chief Inspector Vera Stanhope goes, we will follow—and we’re not alone. In 2017, Ann Cleeves was awarded the Crime Writer’s Association Diamond Dagger, which is the highest honor in British crime writing.