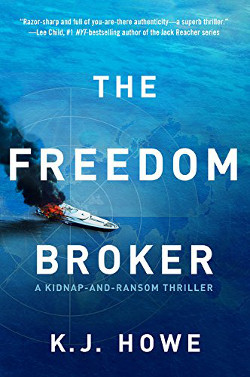 I love a book where the author delves into a subject and learns everything about it, then crafts a story around it. David Morrell does this often; he’s learned to fly a plane to make scenes believable. Megan Abbott studied pro cheerleaders and gymnasts when writing her two latest. And now, K. J. Howe has dug into the terrifying world of Kidnap Rescue, where government and private agents work with families faced with the unimaginable: the loss of a loved one held for ransom by people who will not hesitate to kill or maim them for profit.

Roxane Gay’s An Untamed State depicted this from the point of view of a victim kidnapped in Haiti and explored how she dealt with both her captors and her family during and after the crisis, which left her changed for life. In The Freedom Broker we get into the heads of the kidnappers, the family of the victim, and the people who rescue them.

Thea Paris leads an elite team of operators who specialize in preparing people who might be kidnapped and rescuing those unlucky enough to be targeted. She has skin in the game, as her older brother Nikos was kidnapped when he was twelve years old by a warlord in the African country of Kanzi. Their father, Christos Paris, is the world’s most powerful oil magnate (quaint in a world where corporations and governments control most of the resources, but it gives the story a personal touch). And Christos is the next target.

Thea blames herself for her brother’s abduction, as she was too terrified to scream when it happened. It changed him forever, and their strong bond as brother and sister lets him get away with horribly rakish behavior. Her comrade Rif sees Nikos’s dark side, where she cannot.

She rested against the white stone fence beside the stairs, gasping for air, blood pulsing through her body. She stroked Aegis’ short coat, her dog already recovered and ready for more. Must be nice. Still, a painful euphoria filled her. Papa would be impressed. Maybe he was on deck, watching for her arrival.

She straightened and looked down. Her heart skipped a beat. The Aphrodite was no longer docked. Instead, its sleek lines cut through the water, headed out to sea. What the hell?

The pros who take Christos execute his yacht crew and flee on a helicopter while Thea is off on a run. She returns to find her father’s Blackberry and a cryptic message in Latin. The abductors aren’t behaving like any kidnappers she’s dueled with in her career. They don’t want money. They don’t demand political action. They can only want revenge.

But with a trail of enemies a lifetime long, Thea has nowhere to start. Government agent Gabrielle and her father’s pocket Greek police agent both want to be involved, but Thea can operate quickly. The problem is the kidnappers know far too much about her, her family, and the Paris conglomerate…

Men wearing desert fatigues exited the vehicles, brandishing AK-47s. One of the soldiers opened the rear door of the third truck. A huge man climbed out, dwarfing the others with his height and shoulders that could span the equator. She shivered, recognizing General Ita Jemwa’s large stature and scarred face from the newspaper articles about Nikos’ kidnapping. Standing between her and rescue was the man who’d collected the million-dollar reward for her brother’s return, the man who—according to Nikos’ journal—had been his original kidnapper. She wondered who put those notes in her bag in the first place? Who wanted her to know what really happened in Kanzi?

Now, the obvious bad guy is … pretty obvious, but Howe deftly deflects the blame from him by letting us in his head. He has his own agenda, and the kidnappers have foiled it.

The action is fast-paced and believable; I’m no operator, but I’ve read books by many and known a few, and the gunplay and squad tactics pump up the excitement without stretching believability. Thea is sharp and smart and knows her combat, but her skills don’t make her superhuman. No 135-pound woman clocking out 200 lb. thugs.

The multiple characters keep the story flowing, but I wish we had more time with Thea. Gabrielle, Nikos, and Rif get a lot of page time, and they are interesting characters. Like a teasing TV series, Rif and Thea have great chemistry but don’t get a lot of time together, even after it begins with them partnered. But as this is a series, we can look forward to more developments there.

The plot is twisty, but the players are all in place and nothing comes out of left field. Thea is up against an operator with equal cunning and resources who targets her team immediately and keeps them ducking and weaving. We get an inside look not only into kidnap and rescue teams, but the global oil market and the recruitment of child soldiers by warlords in Africa. The final confrontation pumps up the action to the max and kept me on the edge of my seat. I stayed up burning through the last hundred pages to find out the identity of the abductors and their motives.

A great, solid entry in the espionage thriller genre that will please military buffs and those interested in the twisted world of global politics and the battle over resources that affects us all.