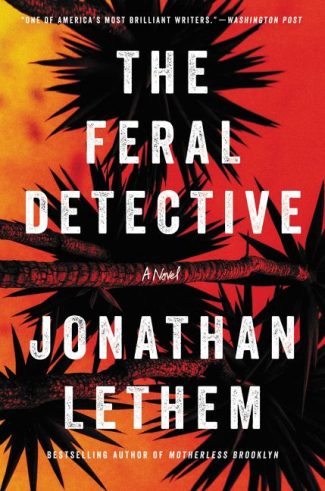 The Feral Detective by Jonathan Lethem is a new-age Noir rooted deep in today’s tumultuous landscape.

Jonathan Lethem’s The Feral Detective is one of the best deconstructions of detective noir narratives published in the last decade. Smart, weird, unique, and told from the perspective of the woman who asks for help with a case, this novel quickly goes from the inside of a detective’s office to a world of strange subcultures and bizarre practices and beliefs while simultaneously morphing into an unusual love story where the ghosts of the past have a powerful influence on the present against a tense, shifting political landscape.

Phoebe Siegler goes to meet Charles Heist because she needs help finding her friend’s missing daughter, Arabella. Heist is a mysterious, quiet man. His office is a dilapidated trailer on the eastern edge of Los Angeles. There is a strange young woman in the trailer and the detective keeps a pet opossum in a desk drawer. Heist agrees to help and the duo set out to find Arabella. Their journey, which will reveal a lot about Heist’s past and the morphing fabric of America, takes them deep into the subcultures of folks living off the grid, desert-dwelling vagabonds, and those who willingly inhabit a reality with a different set of rules. When they finally find Arabella, she’s caught in the middle of a battle between two bizarre groups. Surprisingly, Heist could provide a solution to the mess, but it won’t be easy, and it will require violence. What follows is a unique tale of rescue, love, and survival that takes place between the regular world and something entirely different out in the desert.

Besides deconstructing the detective/lost girl narrative and turning it into a strange hybrid that’s part love story, part adventure story, and part commentary on the current sociopolitical landscape, Lethem created a unique set of characters for this novel. No one is perfect, but these characters wear the sum of their flaws on their sleeve. They are what they are and they are presented as weird from the get-go. This works well because the author wants readers to be aware of how he is treating the trope that beats at the core of this narrative:

It occurred to me that Heist had introduced the opossum by name, but not the girl. I felt demented with despair, having come here. My radical gesture, to quit my privileged cage and go intrepid. Take the role of rescuer. Yet it was as though I’d been willingly reduced, exposed as nothing more than that opossum, or the girl in the blanket. My mission had defaulted to another surrender to male authority, the same wheezy script that ran the whole world I’d fled. All the lost girls, waiting for their detectives.

While Heist is the figure that provokes the important incidents, it’s Phoebe who carries the action. She is a complicated, shifting, moody narrator who continually analyzes things not only in the moment but also within the bigger macrocosm. She is at once a savior and a warrior, a lonely woman and a frustrated citizen, a person concerned with doing the right thing and a keen observer of the world. She speaks truthfully and addresses her confusions regularly (“Heist was as unmannerly, as dour and self-enclosed, as an emo guitarist packing in after a poorly attended gig at a bar in Greenpoint”). And most of all, she is at war with herself over her blossoming feelings for Heist, who comes to occupy an imagined space in her life, one what she isn’t necessarily trying to fill:

I felt we’d come to that juncture where you allude to the man in your life, in order to claim you’ve got one. A live, that is. I thought, absurdly, of mentioning Charles Heist, or asking if she’d heard of the Feral Detective. Knowing Heist had something in common with having a man in my life–he never called.

Later, this confusion becomes even clearer to her:

I endured a crazy oscillation, between scorn and amusement on one side and lust and terror on the other. Either Charles Heist was a bore and a joke, his mountain a total waste of time, or he was monstrous and irresistible, and plotting to savage me beneath frozen cliffs.

Phoebe and Heist leave the world behind and enter a universe of desert-dwellers who have their own history, divisions, and wars. Heist had been there before and is very familiar with it, which makes him able to navigate the madness. Phoebe, on the other hand, comes from a different world and struggles to adapt. Having to undergo so many changes and adventures doesn’t make her previous life vanish. In fact, the oddness she witnesses in the people she interacts with out in the desert illuminates the incongruity she perceives in those out in the civilized world, which recently took an uncivilized turn:

Ordinary people might be the most terrifying thing on earth. Or ordinary Americans, I should say. For months now, I had studied them in the backdrops of the ceaseless televised rallies, stacked in those vertical arenas revering the back of a blue suit and a red hat, trying to fathom what it was they saw in him, and wondering where they went to, after.

The Feral Detective takes the classic detective story and turns it into a puzzling narrative about a man with a dark, strange past who moved away while the people and places he came from remained the same. It is also the story of a woman looking for a young girl but also finding herself in the process, and learning that the self she finds stands alone in the middle of a constructed world where civility is a front and people can be as animalistic as the savages who inhabit the desert. Lethem is a masterful storyteller with a unique voice and a knack for language and observations, and this is another superb addition to his oeuvre.