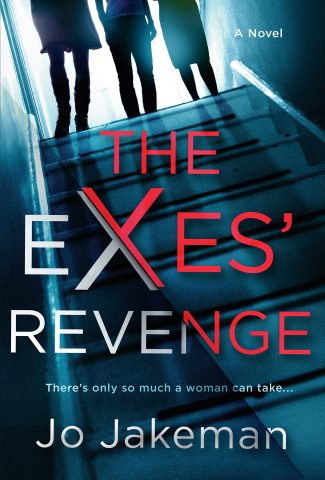 The Exes’ Revenge by Jo Jakeman is a wickedly dark debut thriller about three women who’ve all been involved with the same man and realize the one thing they have in common is that they all want revenge against him.

Readers of Jo Jakeman’s addictive debut thriller, The Exes’ Revenge, will compulsively reference the opening sentence: “I expected to feel free, unburdened, but when the curtains close around Phillip Rochester’s satin-lined coffin all I feel is indigestion.” Imogene, Phillip’s second wife, doesn’t quite believe Phillip is dead, even though she’s at his funeral. Much like Scrooge pondering Marley’s demise, reminding himself that “Marley was dead: to begin with. There is no doubt whatever about that.” There’s no revenge if Phillip is alive, is there?

Jakeman’s throwaway commentary on life’s pivotal moments, like attending the funeral of an ex, is pointedly clever, as when Imogene listens to the vicar eulogizing the dear departed.

The vicar talked of a man who bore so little resemblance to the Phillip I knew that I almost shed a tear. It is a time for lies and cover-ups, not truthful observations.

Seated in the congregation are three women whose lives were intimately intertwined with Phillip Rochester: Ruby, Phillip’s ex-ex-wife, “wearing a diaphanous frock of fresh-bruise purple, the most somber outfit she owns”; Imogene, the almost-ex-wife but actually the widow (since the divorce papers were never signed); and Naomi, the girlfriend, in the front row “shifting uncomfortably as the congregation whispers at her back.” Phillip and Imogene’s six-year-old son, Alistair, is not in attendance. His grandmother thinks he’s too young.

I say that he should be here to say good-bye, to keep up the pretense that Phillip will be missed. Mother won. Some battles aren’t worth fighting. We wrote notes attached to helium balloons instead, Up, up, and away. Bye-bye, Daddy. Rot in hell, Phillip.

Why should Phillip rot in hell? What is clawing at Imogene’s innards and creating creases under Naomi’s eyes “where cried-out mascara threads its way through the cracked veneer?” How is it that only Ruby, Naomi, and Imogene “know how satisfying it feels to know that Phillip Rochester got the death he deserved?”

Chapter 2 flashes back to 22 days before the funeral. Imogene visits the Barn, Phillip’s house, with Naomi. She’s desperate to settle their divorce, hence her willingness to beard the lion in his den. Imogene has no love for Naomi, but she makes nice and accepts a cup of tea while they wait for Phillip to come home. Clumsily, Imogene spills the tea, and the younger woman is noticeably upset. It’s a pivotal moment.

Fear flashed across her face like a shooting star. It was instantaneous and I might have dismissed it had I not seen her hands. She rubbed the soft skin between her thumb and forefinger. I knew that fleshy spot. I remembered what it felt like. For a moment, neither of us moved. I stared at her.

A prickle of sweat coated my forehead, though I was suddenly cold. A door to the past had opened and memories blew in on a cold draft. Phillip used to bend my thumb back until I fell to my knees. Always the left hand too, just where Naomi was rubbing.

Imogene could have possibly tried to ignore the incident, but a few days later, her mother has a mini-stroke—and she runs into Naomi at the hospital. It’s bad, as she shares with her best friend Rach.

“Yep, they’re cleaning her up. Phillip’s done a number on her. She’s in the ER having stitches right now.”

“You should see her, Rach. She’s covered in blood.”

When Phillip visits Imogene at her house a few days later, full of threats and bluster, she somehow discovers her spine. To say more would be to reveal too much of Jo Jakeman’s clever tale. The core of The Exes’ Revenge is how three women share—and are transformed by—their abuse at Phillip’s hands over the years. It’s so scary, like a creepy horror movie where the scythe-wielding monster never quite goes down for the count and thereby hangs a page-turning tale. It’s a great debut—readers will eagerly anticipate Jakeman’s next book.