Review: The Darkest Time of Night by Jeremy Finley 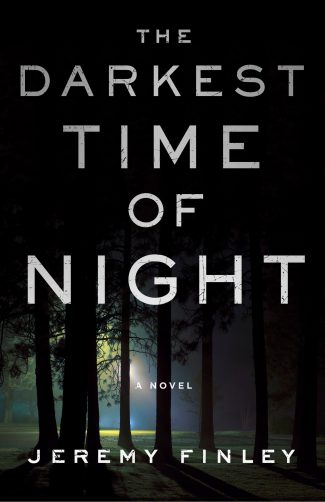 The Darkest Time of Night

The Darkest Time of Night by Jeremy Finley is a fast-paced debut thriller full of suspense and government cover-ups, which explores what happens to people’s lives when our world intersects with the unexplainable.

We had an event called the Pinewood Derby back when I was in Boy Scouts. We were encouraged to build a car from balsa wood to an exact form, add weights, wheels, and paint it to our liking. Then, we’d race our creation to see how well it could do against the other balsa creations. I’d watch each race and become more and more excited as my turn came closer. Then, when it was finally the moment to place my car at the top of the track and let it go, my heart would beat so furiously that I couldn’t imagine it beating any harder. My car started slowly, then picked up speed until it was seriously booking down the decline, moving faster than I could have imagined it would.

So does the plot of Jeremy Finley’s debut novel, The Darkest Time of Night. It starts slow at the top of the run, giving you enough time to observe the characters and see them in real time doing real things, which is how all great thrillers set things up. Then, it picks up speed until it’s finally hurtling down the track. This metaphor wasn’t chosen at random. At the heart of the matter are people who disappear from places all around the globe, many of whom are children. And it is this idea of childhood lost that gave me a moment of childhood remembered, not only with the Pinewood Derby of my own childhood but of the setting of Finley’s plot. The lushness of the Tennessee woods, the otherworldliness of fireflies blinking in the night like earthbound stars, and the idea that the woods behind the house are safe are all things I grew up with. But Finley changes all that and makes the familiar not only suspect but deadly.

Lynn is not your normal heroine. She’s a mother of more secrets than children. She’s the grandmother of a grandson who won’t speak because of what he’s seen and another grandson who’s disappeared, which thrusts them all into the middle of a media blitz—because she’s also the wife of a Senator with presidential aspirations. Her best friend is the sort of friend we all need: someone who won’t take any guff, who might be the sort to sell some pot to a neighbor in need of pain relief, and who will be there when you need her most. Lynn has a green thumb. She runs a greenhouse and raises plants. All in all, she’s a normal woman thrust into an abnormal situation.

That is until you realize that she’s been here before. Far back in her past, when her husband was still in law school, Lynn took a job at the University of Illinois that put her in contact with groups of people who had family members and friends who’d gone missing. And like the grandson she was yet to have, many of them whispered the same words: “The lights took him.”

What a great line to build a plot around. Finley also had the benefit of a brilliant family connection. In a Publishers Weekly interview, he admitted that “to have my mother-in-law, who often holds conversations with sewing in her lap, casually mention that she had once worked as a secretary in an astronomy department for a professor who did alien abduction research, was a true lightning-bolt encounter.” Clearly, as an investigative journalist, Finley couldn’t leave this alone. Thus, came the conception of this magnificent debut novel.

By the time you reach the final chapters, the plot is hurtling with enough speed that you can’t pull yourself from it. Like that Pinewood Derby car of yesteryear, there is a danger of it coming apart or flying off the rails. But whether it is Lynn’s steadfast narrative spirit, your own emotional avalanche of worry over the lives of all the missing children, or the author’s deft molding of fact and fiction, the plot races to a winning finish where, once there, I can’t believe how far I’ve come.

Read an excerpt from The Darkest Time of Night!