Review: The Cabin at the End of the World by Paul Tremblay 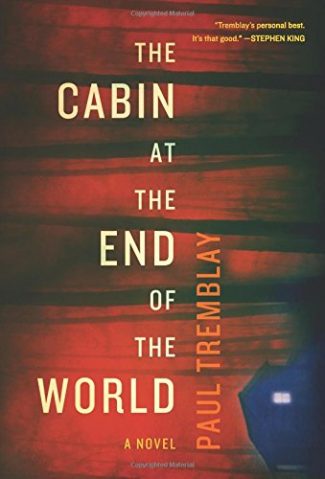 The Cabin at the End of the World

The Cabin at the End of the World by Paul Tremblay is a masterpiece of terror and psychological suspense that adds an inventive twist to the home invasion horror story.

Paul Tremblay is the Bram Stoker Award-winning author of the horror-suspense hybrid novel Head Full of Ghosts (2015) as well as last year’s Disappearance at Devil’s Rock; he also wrote the crime thrillers The Little Sleep and No Sleep Till Wonderland as well as the short story collection In the Mean Time. He has had essays and short fiction published in the Los Angeles Times, Entertainment Weekly online, and numerous year’s-best anthologies and is a member of the board of directors of the Shirley Jackson Awards. Tremblay earned a master’s degree in mathematics and teaches in the Boston area by day. His newest psychological thriller, The Cabin at the End of the World, presses a plethora of hot-button issues.

Readers first meet seven-year-old Wen, who is capturing grasshoppers on the front lawn of the cabin that her family—fathers Eric and Andrew—has rented for their summer vacation. Located on a remote New Hampshire lake, the property exists in peaceful seclusion; the closest neighbors are more than two miles away. Wen’s play is interrupted by the sound of footsteps on the driveway, which announce the arrival of an unexpected visitor. When she looks up, she finds herself sharing space with the largest man she’s ever seen. Despite having been warned against speaking to strangers, Wen ignores the subtle sense of unease that’s bloomed within her and allows the man, who introduces himself as Leonard, to initiate a conversation. Their tentative back and forth is broken when Leonard proffers a reassurance: “None of what’s going to happen is your fault.”

Meanwhile, adoptive parents Eric and Andrew—the former a market analyst, and the latter a college professor—have been sunbathing on the back deck that overlooks Lake Gaudet, one (Andrew) talking the other (Eric) down from the irrational yet inevitable fears that leave him wanting to infringe on Wren’s freedom; after all, nature-filled New England is a far cry from the tumult of the city (Boston). Their good-natured banter is broken, however, when Wren comes bursting through the door, crying and talking incoherently. When she is finally able to calm herself enough to enunciate, she vomits these words:

These people—the aforementioned Leonard, along with Redmond, Sabrina, and Adriane—initially try to talk their way into the cabin but to no avail; consequently, they systematically dismantle the safeguards Eric and Andrew have hastily put in place, invading the space with archaic-looking weapons all the while professing their intent to cause no harm. Strangers until just recently, they were brought together by inexplicable visions of doomsday—and they believe that only Eric, Andrew, and Wen can save the world from the apocalypse. But in order to do so, they must make a willing sacrifice. Otherwise, all of humankind will perish imminently.

It’s a terrifying prospect (and yet one that doesn’t seem entirely beyond the realm of possibility given the current world climate), though Eric and Andrew are understandably skeptical. How did this motley crew come to be, they wonder, and what makes them believe they are humanity’s unlikely saviors? Not surprisingly, the two steadfastly refuse to sacrifice one of their own—and the stronger their resolve, the more desperate and unpredictable Leonard and company become. As the television brings news of tsunamis, contagions, and other calamities sweeping across the world, Andrew argues foreknowledge and coincidence in an attempt to restore logic and lucidity. But it is increasingly apparent that their captors believe they are the chosen ones and that death is necessary to preserve life. There is a price, and it will be paid in blood.

One of the author’s greatest strengths is his ability to create a quiet but ever-growing sense of dread that eventually reaches a cacophonous crescendo. Such is the case here, as each character’s histories, motivations, strengths, and vulnerabilities are slowly revealed through chapters that alternate perspective; this has the effect of intensifying suspense while also heightening the emotional resonance. So, too, the continuous seesawing between hope and despair, faith and fury, and fight and (attempted) flight, as the emotional and physical distress mounts. Cumulatively, the author unfurls a scenario that is both every parent’s and child’s worst nightmare—and one that will quite possibly trigger readers’ deepest, darkest fears.

Paul Tremblay’s star has been steadily on the rise, and The Cabin at the End of the World will undoubtedly hasten that trajectory. Despite earlier dabbling in supernatural suspense, his focus here is largely on horrors of an all-too-human kind, and the results are both cerebral and chilling. Ultimately, the book serves as a reminder that there are things in this world beyond our control—and that may just be the scariest prospect of all.