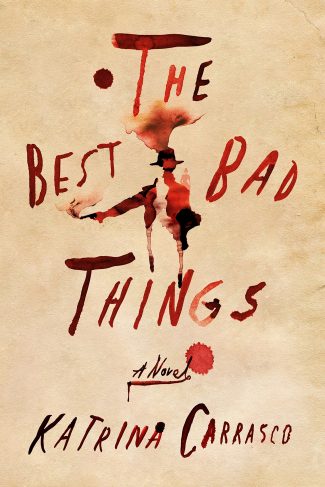 The Best Bad Things by Katrina Carrasco is a debut historical crime novel that introduces readers to the fiery Alma Rosales―detective, smuggler, spy.

You’ve most likely never met anyone like Alma Rosales, the multifaceted heroine of Katrina Carrasco’s unusual, explosive, and highly quotable debut. Turns out that opium was a very big deal in the late 1800s in Port Townsend, Washington, and Alma—formerly of the Pinkerton Women’s Bureau—has put herself right in the middle of the action. Eager to get back in the good graces of her boss and former lover, the seductive Delphine Beaumond, Alma goes undercover to discover who’s been stealing opium from Delphine’s expansive, powerful smuggling operation. Her secret weapon is one of her alter egos, a man named Jack Camp, whom Alma inhabits with aplomb and barely contained enthusiasm.

Remember how to talk like Jack Camp. Hips first, cocksure.

Remember how to fight like Jack Camp—and at this, Alma smiles. This is her favorite thing. The red and sweat and swearing, the fire in her rib cage, the bend and crush of bodies. Muscles contracting. Sunbursts of pain. Nothing but the pummeling, the wild onrushing of life.

As Jack, she finds herself in the lair of one of Delphine’s bosses, Nathanial Wheeler. But he knows her as someone else: sweet and sassy Alma Macrae, who’s spent quite a bit of time, and fancy dinners, seducing him in the hopes of finding out if he’s her thief. Wheeler recognizes Alma under the disguise and claims to be disgusted, but Alma’s not so sure. She senses that he might still be attracted to her, regardless of her appearance, and she does her best to exploit her (hopeful) advantage.

She’s got to be Alma in Camp’s clothes.

This is not as easy as it sounds.

Start with the voice. Switching wholesale into the broad Scots she’d used as Alma Macrae is too much artifice. She must use her own voice with some of Camp’s grit thrown in. She must re-hinge her body. Loosen her mouth, her shoulders. Tuck her hips under her rib cage, a movement that sends twisting pain along her kneecap into her shin. Hardest of all is the mental shift: what will show in her eyes after she drops them to the carpet and concentrates.

Alma angles for a job at Wheeler’s warehouse to suss out Port Townsend’s top opium importer, and to her surprise, Wheeler agrees. But of course, best-laid plans. Alma is a trouble magnet and delightfully doesn’t seem to mind one bit, which makes for a rollicking narrative that barely stops to take a breath.

Carrasco has a tight grip on her setting, which seethes with brawlers and cutthroats, and her plotting is crackerjack. She does jump back in forth in time and inserts police interrogations and the like into the main narrative, so it begs readers to pay close attention. If you enjoy historicals packed with spitfire action and atmosphere, you’ll surely be pleased with The Best Bad Things.

But Alma is the real star of this show. Carrasco’s rapid-fire prose mirrors Alma’s sparking, barely contained energy. In a time where women were fully expected to be demure, Alma—who is bisexual—fully and gleefully embraces her different selves and luxuriates in the effect that she has on men and women alike. She’s nearly always spoiling for a fight, making her few quieter moments that much more affecting. For all her sharp edges, she’s impossible not to fall in love with.

Carrasco’s assured debut is a sensory experience to be savored, and one thing is for sure: the fierce and fiercely intelligent Alma lives her very best—albeit gleefully violent—life with verve and swagger. Following her in the heat of the chaos that trails in her wake is a singular treat.