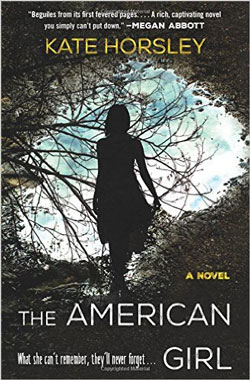 The American Girl by Kate Horsley is a riveting psychological thriller about an American exchange student in France involved in a suspicious accident, and the journalist determined to break the story and uncover the dark secrets a small town is hiding.

Quinn Perkins, an exchange student in the south of France who’s been rooming with the Blavette family, wakes up in the woods unexpectedly. She then walks to a road and smack dab into the path of an oncoming car, leaving her in a coma. Her plight quickly turns into a media sensation because a vacationing couple had videotaped the accident. #AmericanGirl is trending across the internet and ravenous reporters are camped outside the hospital waiting for an exclusive.

Soon after awakening, Quinn begins updating her overly introspective blog with detailed posts of her life, continuing them while recovering. The entries are not chronological, jumping back to before the accident, offering insight into what transpired.

Turns out her French family was not without their thorny issues. The mother has been hosting kids for years for the cold cash and isn’t all that nice. Quinn has fallen for the woman’s handsome, charismatic son to the chagrin of the daughter. We also learn Quinn was being targeted by a stalker whose level of threatening gestures increased, culminating in an alarming video he sent through a popular networking site.

The film is dark, hard to see, but I hear a noise like heavy breathing. A muffled scream startles me. I grip the phone harder. A girl’s face appears, too close up to see in detail. The film is choppy and moves so fast it's hard to take in before the timer in the top right corner counts down. The girl's breathing hard and there's something—a plastic bag, maybe—stretched over her face. Three … two … one, and the screen goes black, the video vanishing forever as Snapchat deletes it and, with it, the girl.

She turns to her “friends” in her social networking circles for advice, though it’s very possible her demented follower could be one of them. Some of the most effective passages Kate Horsley writes is of this typical 17-year-old student reaching out for help to complete strangers. Very contemporary, very sad commentary on fluctuating human connections, fluctuating social order.

In a startling occurrence, the entire Blavette family has disappeared, swiftly turning public opinion against Quinn as they suspect her of foul play. Has Ms. Horsley placed us in the hands of an unreliable narrator?

Well, before you jump ahead, there’s a second narrator in The American Girl named Molly Swift, reporter, who works for American Confessional. Molly and her boss, Bill, take on stories “of police incompetence” and “general corruption.” She manages to convince the nuns at the hospital where Quinn is being treated that she’s the girl’s aunt, and she finagles a visit with the unconscious patient. She uses the opportunity to snoop into Quinn’s cell phone, discovering:

Qriosity_cat was Quinn apparently. Her reply to the comments made me sad. She’d put so much trust in these virtual acquaintances and not one of them had thought to call the police or do much of anything when she vanished, including visit her.

Her story—what I’d read of it so far—gave me an uneasy sense that there was an awful lot going on under the surface of life in the Blavette household, and none of it had made it into the papers.

This is a psychological story with drops of horror mingled in—reminding me of past masters like Shirley Jackson and Richard Matheson, though, perhaps not as outwardly horrific. (There are hair-raising passages of Quinn investigating a gothic-style school closed due to a suspicious death.) But, like said writing legends, Ms. Horsley knows how to drag you down the trigger warning-laced passageways, crafting excitement the old-fashioned way—with gripping dialog and interpersonal relationships bludgeoned under layers of mystery.

Major points to Ms. Horsley for traversing social networking, invasive media, and eye-witness accounts of Quinn Perkins. And, the more we hear through these various sources, the less we understand, as it should be with an intellectual riddle whose ending I didn’t thoroughly guess.

We bounce back and forth between the two women’s narratives and the individual recordings of their accounts that brought them together. Molly and Quinn have similar backgrounds, and every so often, for my ear, the voices blend a bit too much together over the course of the novel. And, for this reviewer—who has been blogging for the better part of the last decade—the Quinn blog posts seem, on occasion, too polished, especially for a young person writing a daily output and seeking instant feedback.

But, it didn't slow me down from enjoying the puzzle unfolding, and having these confessionals, of sorts, added to the tension and the immediacy of the chronicles.

I ardently thumbed the Kindle forward arrow, and a big part of the reason for the book’s success is that Quinn’s various blog (and v-blog) entries are happening in the character’s now. When Quinn types, “What do I do, guys? Who do I tell?” you, as the reader, are going to hurriedly turn the pages for the answers—or at least I did.

I eventually found myself less concerned with how the author constructed her icosahedron and more invested in these two women a long way from home. Ms. Horsley wants to keep us guessing to what is going on—sure sign of a top thriller—and achieves that and then some. Its suspenseful rapids are well piloted, steering characters that each serve a purpose without just being diverting red herrings.

Kate Horsley has written an excellent novel, very cinematic in approach, something that Alfred Hitchcock would have snatched up back in the day for a feature-length film with a young Tippie Hedren in the role of Molly. And, checking her credits, this is her second effort after a novel called The Monster’s Wife, which was shortlisted for the Scottish First Book of the Year Award—I’m definitely going to snag a copy. I wouldn’t be surprised if The American Girl follows in the footsteps of its predecessor by also competing for awards and landing on year end best lists.

Read Kate Horsley's exclusive guest post on how traveling to foreign lands can set the stage for a perfect thriller—and find out how to win a copy of The American Girl!