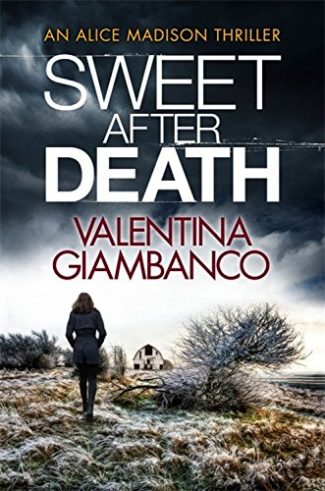 Sweet After Death by Valentina Giambanco is the fourth book in the Detective Alice Madison series, where something evil has crept into the small, tranquil community of Ludlow, deep in the mountains of Washington state.

Sweet After Death, the fourth in the popular Alice Madison police procedural series, is a well-spun story that follows homicide detective Alice Madison and her partner Kevin Brown. This installment takes Madison, Brown, and crime scene investigator Amy Sorenson to the small town of Ludlow, Washington, following a gruesome murder.

One of the most intriguing parts of the book is the dual storyline, which follows Madison and her team but also a mysterious boy named Samuel. For a good portion of the book, it is not clear how this boy fits into the crime Alice and her team are investigating.

The boy’s eyes scanned the ground: the spot where the shade had lingered the longest were still covered by the skin of snow. He crouched and pulled off a glove; his hand was a boy’s hand, with a grown-ups’ thickened skin and nails bitten to the quick.

He broke off the end of a fallen branch with a snap and poked a dark object that looked like a curved cigar half covered by dry grass. It crumbled under his stick and the boy let out a breath. Frozen dirt. It figures.

Each section detailing Samuel’s life brings more questions than answers. Why are his hands so rough? Why would it be frozen dirt instead of a cigar? The run-on sentences make the sections a fast read, and the questions elevate the suspense.

Just as quickly, the story switches back to Madison and her team, who are attempting to navigate relationships with the people of the small town they are investigating as the stakes get even higher.

“We have only the beginning of a trail of evidence: it barely makes him a suspect. Tomorrow morning we’re going to have to tread lightly.” It was one of Brown’s great gifts that he could make a warning sound like the kindest piece of advice.

“I hear you, but he’s all we’ve got.” The sheriff replied. “And I don’t see anybody else in this down causing upsets.

Madison wanted to say that in Seattle causing upsets was practically a job description for a whole group of alienated citizens who never went on to kill but who slowly, carefully self-destructed using drugs and alcohol. She didn’t say it, though, feeling that any sentence that started with “in Seattle” or “in our experience” wouldn’t go down too well in the room.

Too often, crime fiction focuses heavily on the science or the detective work, leaving the characters as afterthoughts. Sweet After Death does justice to both the characters and the investigation, allowing them to compliment each other rather than detract.

Sweet After Death is a fast-paced police procedural that will keep you reading late into the night. Highly recommended for readers who enjoy reading crime fiction and contemplating how the secrets people keep can impact how they interact with the world around them.