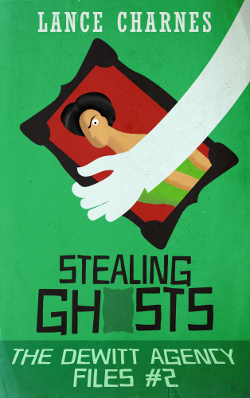 Stealing Ghosts by Lance Charnes is the second book in the DeWitt Agency Files series.

The DeWitt Agency opens for business again, and I, for one, appreciate the clever way that author Lance Charnes jumps into the plot with his protagonist Matt Friedrich eyeing an attractive lady.

The first thing you notice is her eyes.

Big, dark, luminous. She’s no blushing ingénue; those eyes grab you and pin you to the wall. Think you got what it takes? they say. Come find out.

If you don’t fall in, you see the face around those eyes. High cheekbones, a razor-sharp jaw, a long semi-Roman nose, full lips parted just a bit.

Mr. Charnes goes on to emphasize the woman’s creamy skin, and I thought, here we go: a male writer getting lost in the overboard and often cringy explanation of a female character. But then comes the kicker: “Her names Dorotea. She’s ninety-one years old. One look stole my heart. Now I’m stealing her.” Ha!

If you’re still thinking that Matt’s looking at a flesh-and-blood person, guess again. I should have known the prudent author wouldn’t waste any words or time, especially in revving up the machine of suspense. And who’s Matt Friedrich? He’s an ex-architect-turned-thief currently working for the wealthy Allyson DeWitt, proprietor of the Dewitt Agency, which operates on the shady side of business. Much like Simon Templar before him, Matt usually ends up doing some good along the way, albeit with much self-effacing humor.

So now you may be asking, who’s Dorotea? During WWII, Nazi ghouls swiped a portrait of the afore-described strikingly beautiful woman—Dorotea—from a Viennese family, and then Soviet ghouls stole it from the Nazis. Bowen, a descendant of the original owner, had tried the legal approach to reclaim the prized piece of art that’s now in the hands of an affluent fat-cat named Arkady Tovorovsky. However, unable to make headway through the proper channels, he’s hired Allyson’s team to get it back by any means necessary.

The painting is on loan to a museum in Portsmouth, UK, making the timing perfect for a little Thomas Crown caper. As with the first book in this series, The Collection, Allyson selects ex-cop Carson to pair Matt with despite a Rolodex of names to choose from. Carson’s smart, tough, and resourceful, and when together with Matt, they work in a most combustible manner, making for entertaining verbal fisticuffs. Still, they know they are a good two-sided coin who nicely balance each other—though neither would readily admit to it.

Quickly, Matt comes to the realization that there will be more to this heist than meets the eye, as he explains to Carson:

“I’m thinking … we swap in a copy.” I get the are-you-shitting-me? look I expect. “It’ll have to be a damn good copy so the museum and Tovorovsky don’t realize the original’s gone, at least, until it’s time for them to know.”

Complicating matters, our operatives are annoyed by a third wheel attached to this assignment, Julie Arnlund, the client’s cousin and “family historian.” She seems to take an overly friendly interest in Matt. Is it genuine, or does she have an ulterior motive? Initially, her babysitter role seemed to be a rehash of Carson watching over Matt in the first book, but Mr. Charnes isn’t using recycled plot devices in this new novel. Instead, we have some interlacing storylines that give this series its charm.

On my bookshelf is the omnibus The Black Lizard Big Book of Pulps, featuring the golden era work of Carroll John Daly, Fredrick Nebel, Steve Fisher, James M. Cain, Horace McCoy, and my favorite, Cornell Woolrich. It is no exaggeration to say that Lance Charnes would fit well within this table of contents. Though, I’m glad he’s not because it’s nice to have some modern It Takes a Thief escapism to slip away to in this world gone awry. Suffice it to say, I can’t wait for The DeWitt Agency Files #3.

Read an excerpt from Stealing Ghosts!