Review: Splinter in the Blood by Ashley Dyer 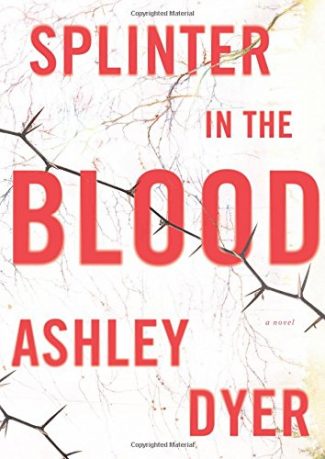 Splinter in the Blood

Splinter in the Blood by Ashley Dyer is a propulsive debut suspense novel filled with secrets, nerve-jangling tension, perplexing mystery, and cold-blooded murder, where a police officer on the hunt for a macabre serial killer is brutally attacked and only his partner knows the truth about what happened—and who did it.

Take an award-winning author of psychological suspense (Margaret Murphy); add a senior lecturer in policing and forensic consultant (Helen Pepper); bring them together, and voilà—a new author, Ashley Dyer, is born. Every page of Splinter in the Blood, their debut suspense novel, is informed by their felicitous collaboration.

After months of hunting a cold-blooded murderer that the press has dubbed the Thorn Killer, Detective Greg Carver is shot in his own home. His trusted partner, Ruth Lake, is alone with him. Yet instead of calling for help, she’s rearranged the crime scene and wiped the room clean of prints.

Winston Churchill’s comment about Russia is pertinent because the mysterious, almost opaque plot is, “a riddle wrapped in a mystery inside an enigma.” First and foremost, why did Ruth Lake wipe down a crime scene and abscond with her partner’s copious crime papers, notes, and files? On Carver’s bedroom wall are “smiling photos of five female victims alongside handwritten notes.” Lake adds them to her haul. Another mystery: when Carver emerges from a coma, how much does he remember of what happened? There are many points of view in Splinter in the Blood, and each fleshes out the hunt to capture the Thorn Killer.

The most chilling POV is that of the Thorn Killer himself. He watches the police investigators being interviewed in front of DCI Carver’s house. He’s particularly interested in Ruth Lake: “The killer stops midstep and turns to face the screen, wondering, not for the first time, what she’s thinking.” Her body language seems off.

She really doesn’t want to leave. And then suddenly she does, and she’s moving fast, dragging her car key out of her pocket so fast that it practically turns inside out.

Playing the sequence one more time, the viewer leans forward, looking for the instant that alarm turns to relief.

The camera zooms in on Ruth’s face as she follows the ambulance past the tape. Her jaw is clenched tight enough to break a molar.

“Sergeant Lake, what have you been up to?”

The serial killer uses a sadistic method to kill his victims. The police toxicologist’s report reveals the details. Ashley Dyer gives Darshan Singh, the lab specialist, his due.

Tox results usually came through long after the first flush of excitement in an investigation had faded. Added to this, toxicologists rarely got out into the field—they were very much laboratory creatures, often isolated even in that setting as cerebral and a bit standoffish.

Singh tells Ruth Lake the killer used aconite, a garden plant. Listen to his excitement as he describes the effects on humans.

“Even picking the plant leaves with bare hands can be dangerous,” he said, warming to his theme. “I found a paper in the Journal of Analytical Toxicology. Let me quote you: ‘Tingling starts at the point of absorption and extends up the arm to the shoulder, after which the heart will start to be affected.’ Imagine how much worse it might be if the skin has been broken—or punctured.”

Readers who revel in accurate, detailed descriptions of police procedures will be absorbed by Splinter in the Blood. The devil truly is in the details. Carver is obsessed by his attack, which he is positive is in retaliation to his success at getting palpably close to solving the Thorn Killer mystery. Adding to Carver’s anxiety, the fifth victim is a dead ringer for his estranged wife. Who’s next? Dyer also explores the psychological mystery behind Lake’s actions. Lastly, the juxtaposition of the macabre murders and the serial killer’s twisted psyche ratchets up the tension.

Ashley Dyer’s ace writing team leaves everything on the page—here’s hoping Splinter in the Blood is the first of many.