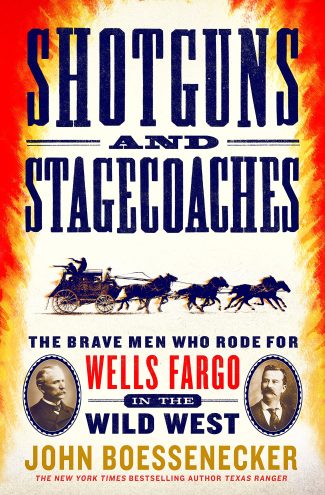 From 1852 to 1918, Wells Fargo & Company’s Express was an integral part of American society. It was the perfect equivalent of today’s Federal Express: Wells Fargo delivered packages to customers through the country and was faster and safer than the U.S. mail. Of course, there was nothing dramatic or exciting about that; ninety-nine percent of Wells Fargo’s express service was routine delivery work.

It was that other 1 percent that made Wells Fargo stand out from every business enterprise in American history: the company’s relentless battle against thieves, highwaymen, and train robbers. Wells Fargo hired tough men who were good with guns to protect its express shipments; it employed crack detectives to unravel robberies and track down bandits. Some of the fabled characters of the Old West acted as Wells Fargo messengers, guards, or special officers: Wyatt and Morgan Earp, Bob Paul, Jeff Milton, Jim Hume, Fred Dodge, Harry Morse, and even the poet Bret Harte.

But the stories of most of the company’s expressmen have been long lost in the shadows of the past. Since the 1930s, many volumes have been published about Wells Fargo, but no book has ever been written about its express guards and sleuths. In the pages that follow are the true stories of twenty of the company’s most valiant shotgun messengers and detectives of the Old West…

When we think of the Old West—when we turn on an action-packed Western—the image of a stagecoach drawn by a galloping team of horses and handled by men sporting shotguns is one of the first images we see.

They’re a ubiquitous shorthand for the period and genre. Without them, there’s a lack of authenticity.

And authenticity is what John Boessenecker provides in spades with Shotguns and Stagecoaches. Over the last 30 years, he’s churned out eight bestselling nonfiction titles centered on the Old West: profiles of the short-lived mining towns, narratives on the ruggedness of frontier life, and biographies of lawmen and bandits alike.

With Shotguns, he gets to cover a wide swathe of action and history spanning several gold rushes, technological advancements, the birth of American police forces and investigative sciences, and everything from clashes with Native American tribes to train robberies and shoot-outs with fugitives.

Each of the 20 chapters is devoted to a single larger-than-life man, all of them as colorful as the most fanciful film cowboy. There’s Pillsbury “Chips” Hodgkins, who went from an apprentice shipwright to gold prospector to messenger to unofficial policeman:

The career of Chips Hodgkins was the early history of Wells Fargo. During the initial years of the California Gold Rush, he worked for its predecessors, and when those small local express firms were absorbed by Wells Fargo, he served the new company faithfully for decades. For forty years, from 1851 to 1891, Chips was the best-known express messenger on the West Coast, transporting tens of millions of dollars in gold, first by horseback, then by stagecoach, and finally by steamship and railroad. He was so scrupulously honest that it was commonly said of him, “No man in the United States ever actually handled more money than he did, but not a nickel of it ever stuck to his fingers.”

Henry C. Ward, one of the very first stagecoach drivers for Wells Fargo, was known for his natty dressing and popularity with the ladies, his loyal dog Pony who trotted fifty miles a day behind his stage, and a will of pure steel—and for his almost preternatural luck: not even being pinned by a crashed coach could kill Ward, who also survived numerous shootings and outwitted several outlaws throughout his career.

The chapters aren’t pure biography, however. In following the careers of the Wells Fargo detectives—like the first, Henry Johnson—we also get a vivid picture of how unequal justice could be in the lawless West, where mobs would lynch men even suspected of robbery, while confirmed thieves were let off on technicalities or for lack of hard evidence.

Sprinkled throughout the biographical details are quotes and anecdotes lifted directly from the period’s newspapers and diaries. These colorful snippets and fanciful descriptions make for a nice contrast to Boessenecker’s straightforward, no-nonsense prose.

The result is a good balance between informative and entertaining, keeping the text from getting too bogged down in a dry recitation of facts. Don’t let the nonfiction label deter you: there’s plenty of excitement and surprise here. Shotguns and Stagecoaches is far lighter, easier to read, and more fun than a textbook.

Throughout the text are numerous photos of the Wells Fargo men, as well as their friends and enemies, and the book concludes with an impressive bibliography for those eager for further reading and research.

With the holidays fast approaching, Shotguns and Stagecoaches would be a perfect gift for the Western fan or history buff in your life, and it may be just the thing to tempt someone who loves John Wayne but might hesitate to pick up a book. The promise of gritty gunfights and derring-do in dusty towns will entice even the most reluctant of readers.