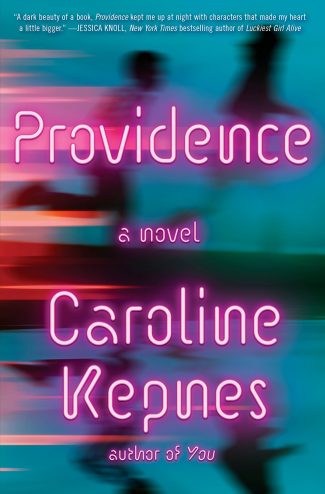 Providence by Caroline Kepnes is a propulsive novel that’s part love story, part detective story, and part supernatural thriller that makes keen and powerful observations about human connection and how love and identity can dangerously blur together.

Caroline Kepnes made an indelible mark on the literary world with 2014’s You—a book that earned rave reviews (and made Stephen King a fan) both for its overall ingenuity and the author’s cunning portrayal of a (mostly) charismatic stalker named Joe. That title spawned a sequel, Hidden Bodies (2016), and a forthcoming television series for Lifetime; it also established Kepnes’s reputation as a leading voice of her generation. She makes a much-anticipated return with Providence, which showcases the diversity of her storytelling talents.

The book opens in Nashua, New Hampshire, where readers are introduced to 13-year-old Jon Bronson. An introvert by nature, Jon prefers the company of the class hamster to his peers and takes a secluded path to school to avoid the neighborhood bullies, led by jockish Carrig Birkus. His one true friend is Chloe (who he affectionately refers to as “Chloe Smells Like Cookies”), a popular girl who still hangs out with him despite the social stigma of doing so. Though the chances of their coupling seems unlikely, it’s not entirely impossible, and the hope buoys him. But then, Jon vanishes without a trace, kidnapped from the very woods that gave him sanctuary, and nothing is ever the same.

Flash-forward four years, and Jon wakes up in the basement of a local mall where he has been held captive by a substitute teacher. The joy of his return is quickly dampened by the realization that Jon—now studlier and stronger—is not the same person. Chloe, too, has changed; though she held constant vigil for him when others began to forget, the undeniable allure of a normal teen existence (boys!) eventually won out. That she learns of his homecoming while frolicking in a pool with Carrig Birkus, now her boyfriend, and her BFFs is some indication of time’s inevitable influence—though she immediately ditches them when she hears the news of his return (much to Carrig’s dismay). Their reunion is more farce than fairytale, however, when Chloe passes out at the sight of him and then wakes up to the realization that Jon won’t allow himself to share physical space with her.

Flash-forward again. Providence Detective Charles “Eggs” DeBenedictus has been painstakingly investigating a rash of recent deaths among seemingly healthy college students and 20-somethings, all felled by apparent cardiac emergencies. While he initially suspects this may be the inexplicable work of a serial killer, the deeper he digs, the more confounded he becomes by the lack of clear-cut answers. As his obsession with uncovering the truth grows, so too do the stressors on his marriage, which has been derailed by the residential placement of his young son, Chuckie, who has Autism (or a similar affliction) and an imminent medical threat. Prioritizing his personal and professional obligations has long been a point of contention, but he’s just about reached the point of no return.

Meanwhile, Chloe has made a name for herself in New York City, where she creates avant-garde art inspired by Jon’s eyes. She has remained intentionally accessible to him (though otherwise aloof) and continues their communications via text, Facebook, and the occasional phone call. But she is continually disappointed by his failure to show up in the flesh. Timing being what it is, an unexpected romance blooms, and Chloe begins to let go of the past as she looks into a future that promises normalcy. But normalcy has never been her and Jon’s thing, and a confluence of events sets them on a collision course that will have colossal consequences.

Admittedly, there’s a lot going on within the narrative—but everything is anchored by heartfelt emotion, including the subtle supernatural flourishes. (There’s a Lovecraftian subtheme that will delight bibliophiles.) Kepnes beautifully, and sometimes painfully, captures the angst of her characters, whether it be the headiness of new love, the despair of unrequited love, the bitterness of tainted love, or the confliction of maturing love. Throw in ambition, grief, jealousy, revenge, and a whole bunch of other complicating factors and you’ve got a highly combustible literary cocktail. But it’s all done with a deft hand, and no one storyline overwhelms another. Rather, they complement each other—with an ending that will break your heart even as it puts the pieces back together.

With Providence, Caroline Kepnes has written the next chapter in her career ascension—one that delivers on the promise she’s shown and declares a prescient new direction. Regardless of genre, it’s the inimitability of her voice, the depth of her characters, and the underlying sense of realism that will continue to speak to readers around the world. She’s still one to watch and will be for many years, and hopefully many books, to come.