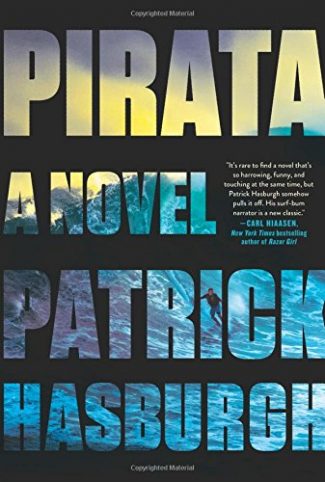 Part thriller, part family novel, Pirata by Patrick Hasburgh—writer and series creator of 21-Jump Street—is about an ex-pat American living and surfing in Mexico, the family he loves, and the murder he witnesses.

Hope you’re up on your surfer lingo because there’s a lot of it in this fantastic thriller/Mexico-set concoction by the creator 21-Jump Street. It’s been about seven years since Nick Lutz was shot in the eye by a customer while demoing a car at the dealership where he worked. Nick should have died. After all, he not only lost an eye but ended up with an exit wound in the back of his head and a bad case of Traumatic Brain Injury Syndrome (TBI).

TBI has a lot of nasty symptoms and repercussions, one of which is grand mal seizures. It’s in the middle of one of these seizures (after going off his meds) that Nick crashes his car with his seven-year-old son Marshall in it, breaking Marshall’s neck. Marshall survives, but a devastated Nick runs off to Mexico where he figures he would do the least amount of damage to his now ex-wife and son. At least he’s found a way to (mostly) manage his symptoms:

Down here in Mexico, anyone can drive. Nobody needs a license, and it doesn’t matter if you have TBI and PTSD or whichever PC word soup is being used to mean “brain damaged.”

The first thing they do after you start having fits is to load you up on drugs like Dilantin that make your body feel like it’s filled with cement—like in those dreams where your legs are so heavy you can’t run.

But when they stop working, you get moved up to what are called psychotropics. Which sounds like where you’d send your brain for a vacation. And that’s exactly what those drugs do—until they made me start to twitch, which was as bad as the fits.

So I just stopped taking them altogether—except for the recreationals.

Now, he lives off his disability check—which goes quite a long way in Mexico—and relaxes at his little beach house after long days hitting the waves. He enjoys contributing to the local color. Some folks call him Pirata, due to the eyepatch he wears over his missing eye.

Sometimes, he surfs with the crass Winsor and lusts a little after Winsor’s girlfriend, Meagan. Meagan has two 13-year-old sons, Obsidian and Jade (they’re not twins—it’s complicated), and Nick enjoys being a bit of a surrogate father to them, teaching them to surf and just hanging out with them. He misses Marshall, and they obviously fill a void. It’s not perfect, but it’s something—until something really bad happens.

Obsidian claims that Meagan caught Winsor molesting Jade, so Meagan—in full-on momma-bear mode—put a claw hammer into Winsor’s head and stuffed him inside the walk-in freezer of the little bar he owns. When Nick goes to investigate, Winsor indeed appears to be very dead.

It’s here that Nick comes to a crossroads. He’s incensed at what Winsor supposedly did, and calling the authorities would be disastrous. Things are a little different in Mexico—as you may have gathered—but Nick is understandably terrified of getting caught.

First order of business is concealing the body:

I put the hammer on the table next to the tequila.

Grabbing Winsor by both ankles, I stretched him out and flipped him on to his back, sort of the way you tip a wheelbarrow onto its side. He wasn’t really that stiff yet.

It was pretty easy to roll Winsor into the bag. I started to zip it up.

I had to kneel on his chest as I pulled the zipper closed. I even had to bounce up and down a little bit, and when I did, he croaked out a burp that was ghastly—Gagger’s double overhead, easy.

I finally got the board bag closed, except for the last little bit. Winsor’s face was framed by black canvas, and the jagged plastic tracks of the bag’s big zipper dug into his fat cheeks. His eyes were closed, and there was some snot on his face. I wiped his nose.

We had been friends. I had surfed some good waves with this guy. So I figured I should probably say something. But I barely believed in luck, let alone God and heaven, so what the hell was I going to say.

“Adios,” I finally said. And then, like recovering Catholics everywhere, I made a sloppy sign of the cross.

Nick then realizes that moving a body isn’t as easy as it looks.

“This is fucked,” I said, absorbing the fact that my only experience with hard-core crime was what I’d seen on television.

And committing one that you might actually get away with is even harder.

I was going to need help.

So Nick calls his friend Chuy, who helpfully suggests dismemberment, which Nick quickly nixes. So Chuy grabs his very scary cousin José, who happens to have a fishing boat. Burial at sea it is! It doesn’t go smoothly, but it does go.

And then? Well, life goes on … for a while, at least. But for poor Nick, nothing can ever just be simple, as proved by a psycho he calls El Jefe, an FBI Agent, and Meagan and her boys. And, of course, there’s that body that washes up on shore.

I adored this book. If you’re interested in what life is like among surfers, expats, and locals (not the touristas who flood the resorts) in Mexico, you’ll love Pirata. It’s a lifestyle that’s simultaneously seat-of-the-pants and chill as hell. Nothing is really every certain, so when you find good people, you keep them close. Though, I suppose that applies anywhere.

Unfortunately, lawlessness abounds, but Patrick Hasburgh takes pains to remind people that the dangers unique to Mexico are easily overblown and exaggerated while also stressing that it’s not a terrible idea to be careful. Even then, there are the random weirdos for which you really can’t plan. See: El Jefe.

Nick is delightfully flawed, a bit hapless, innately decent, and truly doing his best—even if he doesn’t do it perfectly or really all that well. His desire to create a family, even if not a traditional one, is poignant.

That said, there are some truly scary moments in this book as well as some darkly funny ones, like the gruesomely hilarious scene on the fishing boat when they attempt to dispose of Winsor. You might laugh a little but also feel a bit ashamed for laughing. This is one of the most unusual books I’ve read in a long time, with a very unusual protagonist and a cast of eccentrics with which you’ll fall in love. If you have a beach nearby, grab a copy of Pirata, settle down in the sand, and buckle up. I can’t wait for more from Patrick Hasburgh!