Review: Our Kind of Cruelty by Araminta Hall 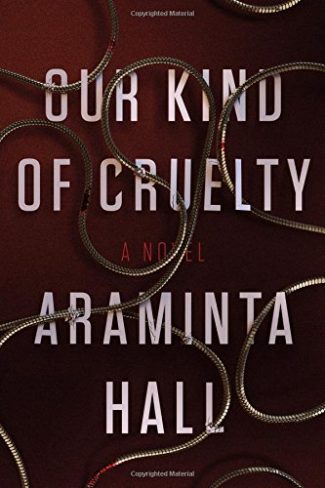 Our Kind of Cruelty

A spellbinding, darkly twisted novel about desire and obsession as well as the complicated lines between truth and perception, Our Kind of Cruelty introduces Araminta Hall, a chilling new voice in psychological suspense.

Communication in any relationship is a tricky thing. Mike and Verity—or “V,” as he calls her—know each other so well. They met in college and spent every moment together until Mike left for work in New York City to establish himself in the investment banking world. Verity encouraged the move for him, as two years would be nothing compared to the rest of their lives together. They will be able to pick up right where they left off, including playing their secret game, the Crave. As Mike explains:

The rules of the Crave were simple. V and I went to a nightclub in a predetermined place a good way from where we lived. We traveled there together but entered separately. We made our way to the bar and stood far enough apart for it to seem like we weren’t together but close enough that I could always keep her in my vision. Then we waited. It never took long, but why would it when V shone as brightly as she did? Some hapless man would approach and offer to buy her a drink or ask her to dance. She would begin a mild flirt. And I would wait, my eyes never leaving her, my body ready to pounce at all times. We have a signal: As soon as she raises her hand and pulls on the silver eagle she always wears around her neck, I must act. In those dark throbbing rooms I would push through the mass of people, pulling at the useless man drooling over her, and ask him what he thought he was doing talking to my girlfriend. And because I am useful-looking in that tall, broad way, and because V likes me to lift weights and start all my days with a run, they would invariably back off with their hands in front of their faces, looking scared and timid.

Skyping and texting keep the couple in touch during the separation. V visits Mike in the U.S., and they even find a place to indulge in the Crave. Then, Mike returns to England to spend Christmas with Verity and her family. The first night there, he confesses to having a one-night stand and promises it will never happen again—but V calls it quits.

Months later, Mike receives an invitation to her wedding. Mike is devastated until he realizes that she is still punishing him for his indiscretion. He knows he deserves it. All he has to do is figure out what it is she wants him to do. This is just another part of the Crave. He emails her to accept the invitation.
And she responds.

I read the e-mail many times, until I had absorbed it and let it become part of me. It was impossible not to see the implied meaning behind everything V said. When she said “time spun away from me, as usual,” and “you know the way she does,” she was clearly asking me to remember how well we knew each other. Even telling me to invite Elaine over was like her laying a hand on my arm, the way she used to do when dispensing advice, letting me know she still had the power to make me do things.

Where is the line between love and obsession? Between knowing another so well you can almost read their thoughts and wishful thinking? Between reading between the lines and ignoring what has been explicitly stated?

There have been a lot of conversations lately about male/female relationships and communication. A woman says “no,” but a man takes it as playing hard to get instead of an outright refusal. The man is meant to be the pursuer, right? Woo the woman. Don’t take no for an answer.

We see this play out in any number of romantic comedies. The couple has an initial attraction to each other, but something pulls them apart. Or worse, he does something that completely ticks her off. She says it’s over and changes jobs, moves across the country, becomes engaged to someone else, or all three. He pines for a while until a friend says something like, “If you want her, go get her.” Hilarity ensues, and he wins her back over many initial objections on her part.

Therein lies the suspense and, may I say, horror in this story. Told from Mike’s point of view, we can’t tell if he’s telling the truth or what he thinks is the truth. If this had been a movie, I would have covered my eyes many times. Yet, just when I thought I knew what was going to happen next, the author surprised me. Seems I can’t read minds either. And that is a good thing when it comes to reading this thriller.

Read an excerpt from Our Kind of Cruelty!