Review: Our House by Louise Candlish 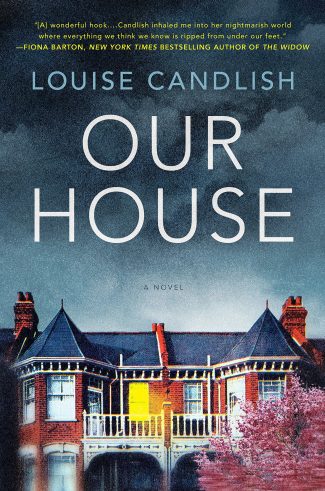 Our House by internationally acclaimed author Louise Candlish is a disturbing and addictive novel of domestic suspense where secrets kept hidden from spouses cause shocking surprises that hit home.

Louise Candlish’s latest domestic suspense novel, Our House, has had a ton of buzz surrounding it, so I couldn’t wait to dive in. Londoner Fiona “Fi” Lawson’s husband, Bram, has cheated on her one too many times, and she finally decides to call it quits. Wanting to negate the impact on their two young boys as much as possible, she and Bram decide on a “bird’s nest” option. This isn’t something I’d ever attempt, but hey, to each their own, right? They decide to keep their beautiful home in a very sought-after neighborhood and take turns living there with the boys while alternately using a small flat that they come to call “Baby Deco” due to the art deco look of the building. It actually seems to work out pretty well. The boys barely register a blip on their existence, and Fi—though struggling with the aftermath of infidelity and the breakup of her marriage—is starting to look forward instead of lingering in the past.

She must be mistaken, but it looks exactly as if someone is moving into her house.

The van is parked halfway down Trinity Avenue, its square mouth agape, a large piece of furniture sliding down the ribbed metal tongue. Fi watches, squinting into the buttery sunlight—rare for the time of year, a gift—as the object is borne shoulder high by two men through the gate and down the path.

My gate. My path.

No, that’s illogical; of course it can’t be her house. It must be the Reeces’, two down from hers; they put their place on the market in the autumn and no one is quite sure whether a sale has gone through. The houses on this side of Trinity Avenue are all built the same—redbrick double-fronted Edwardians in pairs, their owners united in a preference for front doors painted black—and everyone agrees it’s easy to miscount.

Can you imagine coming home and finding someone moving into your house? Of course, Fi is in shock, and with the help of the new homeowners (as much as they can—I can imagine how horrid it would be to be the ones thinking they bought a house on the up and up and finding out otherwise), Fi attempts to find out what has happened.

Bram, it seems, is in the wind. Fi can’t find him, and he’s left the kids with his mother after telling them some ridiculous cover story. Fi is stumped. After all, Bram is a cheater, but could he actually do something this horrible to his wife and kids?

Of course, nothing is simple, and Candlish drops readers into a truly dark rabbit hole of blackmail and deception, the lengths that some will go to in order to protect themselves, and the lies we tell those we love the most.

The narrative is split between Fi’s recording of her story for a podcast called The Victim, her and Bram’s third-person narratives, and a Word document that seems to be Bram’s confessional. The split narrative does require you to pay attention, but those that do will be rewarded. It’s a type of storytelling that could have been confusing in lesser hands, but Candlish handles it like the pro she is, and it expertly highlights the many near misses and misunderstandings that can so often occur between even the most loving and healthy of couples.

I predict that some readers might label Fi as cold while finding Bram—despite his many (so, so many) transgressions—sympathetic. Don’t fall into this trap! To me, Fi was a breath of fresh air. She had to make some pretty hard decisions, even at the expense of her own emotional wellbeing, in order to not impact her children’s lives, and if she bears her pain with stoicism and pragmatism instead of dissolving into puddles of tears (which, personally, I totally would have), it’s absolutely her right and doesn’t make her any less sympathetic. That said, Bram is actually sympathetic. He fully recognizes that the spiral his life has taken is completely due to his own idiotic, selfish choices. By the time the book wraps up, he’s a pitiful, tragic shadow of his former self—a golden boy whose brash hubris never got him into more trouble than he could handle until now.

No one comes out on top here. Not really. The ending isn’t nihilistic, but it may leave readers with a sense of melancholy that will linger. This thoughtful, sophisticated, and suspenseful read is well worth your time.