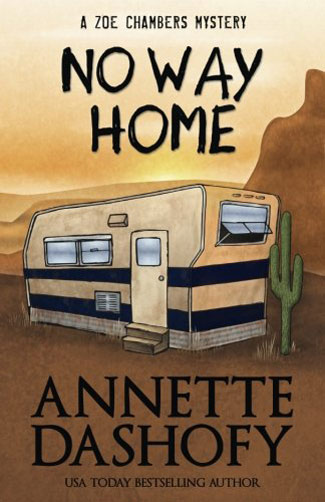 No Way Home by Annette Dashofy is the fifth book in the Zoe Chambers Mystery series.

As Paramedic Zoe Chambers prepares to lead a trail ride from her stable through the woods, a horse being boarded there gallops back from the trail minus its rider. She leaves the other riders behind to find her friend and give him a ride back but finds him dead instead. It might have been an accident, but Dale Springfield was the head of group trying to block fracking in their area, so plenty of people hoping to make it rich on the leasing rights had reason to want him out of the way.

This could be Zoe’s first case working as Deputy Coroner, but her best friend wants her help too.

Four? Rose, Sylvia, Allison…and Zoe? What good would she be in New Mexico? Not to mention she had Dale’s case work.

“No,” Rose said after a pause. “Four.” She let out an exasperated growl and looked up at Sylvia. “I’m on hold again. They’ve managed to find us two seats, but are trying to tell me four is impossible.”

Sylvia pushed her water glass away. “You and Zoe take them. I’ll get a flight for me and Allison as soon as I can.”

“I think Rose and Allison should go,” Zoe said.

Rose gave her an accusatory look. “I need you.”

Rose’s son has gone missing in New Mexico. Not only that, he’s considered a person of interest in his girlfriend’s murder, and her parents are pushing hard for the local sheriff to find and arrest him. Zoe joins Rose to see if they might be able to find the young man and prove he had nothing to do with the death.

Back home, Chief of Police Pete Adams is busy with the murder of Dale Springfield. And a young girl has been found dead of an overdose. He wishes Zoe was there, while she would love to have Pete helping them out in New Mexico.

I had not discovered Zoe Chambers before reading this fifth installment in the series. I didn’t have any trouble figuring out what was happening, though. The author slips in backstory without drawing attention to it, which is not an easy thing to do.

“So where are you calling home these days?”

Her current lack of a permanent address was no secret, but the change in subject startled her. “Mostly I’ve been bunking in the ambulance garage.”

“I thought you were staying with your partner and his family while he recovers.”

Earl Kolter had been shot in the line of duty two months earlier, and Zoe and her two cats had moved in, theoretically to help care for him while his wife was at work. The truth was Zoe had worn out her welcome at Rose’s house and needed a pet-friendly alternative. Earl’s family had welcomed her and her felines to crash at their place. “I was. I am. Sort of. My cats are still there until I find someplace permanent.”

“Are you so difficult of a houseguest that no one can put up with you for more than a few weeks?”

I love cozies. This Agatha Award nominee includes almost all of the factors that are usually part of what makes a mystery a cozy. Small town location? Check. Protagonist who isn’t a cop or private investigator? Check. Budding romance? Check. No blatant sex? Check. Violence takes place “off screen?” Well…

No murders happen on screen, but there is definitely some violence that happens in front of the reader. Nothing gory or gratuitous, but things do turn intense in spots. I was okay with it, though, because it fit with what was happening in the story.

Drugs and addiction also play a big part in the book. Ms. Dashofy shows what can happen to addicts, their families, and friends even in a safe, rural community. Given the rapid spread of opioids and other drugs all over the country, this subplot lends a realistic, if sad, note to the story.

Add in the fracking debate taking place between environmentalists and farmers who have fallen on hard times and No Way Home is a timely look at real events. Both sides are presented clearly without Zoe, or the author, tipping her hand as to which side she agrees with. Another difficult thing to pull off. I found myself thinking about both of these issues while trying to solve the mystery along with Zoe and Pete. All I can say about that is, “Nicely done.”