Review: Night-Gaunts and Other Tales of Suspense by Joyce Carol Oates 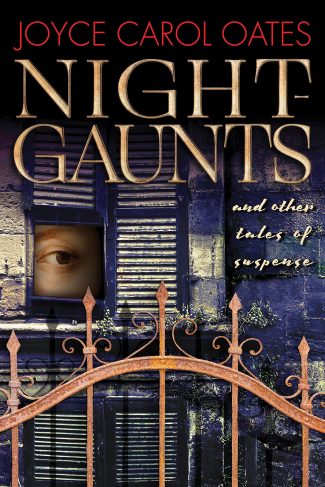 Night-Gaunts and Other Tales of Suspense

Night-Gaunts and Other Tales of Suspense by Joyce Carol Oates is a collection of six previously published short stories that stands at the crossroads of sex, violence, and longing―and asks us to interrogate the intersection of these impulses within ourselves.

The prolific, prodigious Joyce Carol Oates has published more than 70 books in a career that has transcended genre and convention. She has been nominated for the Pulitzer Prize in Fiction four times and has received honors including the PEN/Malamud Award for Excellence in Short Fiction and the National Book Award. Currently the Roger S. Berlind Distinguished Professor of the Humanities at Princeton University, Oates has maintained an impressive output consisting of novels, short stories, poetry, essays, plays, and criticism. Her newest, Night-Gaunts and Other Tales of Suspense—a collection of six previously published pieces—follows last year’s similarly styled compendium, DIS MEM BER.

The collection opens with “The Woman in the Window,” which was previously selected for inclusion in The Best American Mystery Stories 2017 and is a reimagining of Edward Hopper’s painting, 11 A.M., 1926. In it, a 30-something woman sits naked (except for a pair of high heels) in her apartment, waiting on the married man she’s come to both love and loathe. Meanwhile, the married man is similarly conflicted by their continued coupling. Will this be the week that he fails to show? Or will it be the week that she puts an end to things once and for all? The parallel perspectives are illuminating and heighten the tension.

In “The Long-Legged Girl,” dowdy professor’s wife Elinor Stockman prepares tea for an attractive, agile student, Stacy, whom she suspects of having relations with her husband. Presented in beautiful Wedgwood teacups, one of the servings holds an ugly surprise: a lethal mixture of medications masked by Bengal spice. But who will sip from this toxic brew? “Sign of the Beast” recounts young Howard’s shameful infatuation with his new Sunday school teacher, Mrs. S___, who acts young, talks loud, and gives “Howie” the kind of attention that both arouses and alarms him. It’s a slow burn, and one that is not destined to end well.

The central piece is “The Experimental Subject,” which totals nearly a third of the book’s length. The story introduces an Asian man of indeterminate age, known (not so) simply as N___, who works as the senior technician in a college professor’s primate laboratory. It’s his responsibility to identify prospective subjects for a secret experiment—to say more would spoil the surprise, but it’s suitably sordid—that has the potential to win said prof the Nobel Prize (if he’s not felled by ethics violations). But what begins with N___’s pure, ambition-driven zeal gradually transforms into something deeper, and he soon realizes that the consequences of his actions may prove deadly.

“Walking Wounded” is the story of a middle-aged writer who returns to his childhood hometown after having been eviscerated by cancer and the requisite life-prolonging surgeries. Hired to complete a deceased colleague’s manuscript, he struggles to find motivation—and inexplicably becomes enamored with a silvery-haired woman that he can’t help but follow.

Finally, the title story—an homage to H. P. Lovecraft—introduces Horace Phineas Love Jr., a young man who sees otherworldly apparitions in the wake of his father’s death. Needless to say, not all is as it appears—and a long-held secret, once exposed, reframes … everything.

While each story is a study in suspense, there are other thematic commonalities. These include ruminations on love, lust, longing, and lunacy—and the often inexplicable ties that bind them. Additionally, half of the stories pay subtle reverence to the magnetism of books, libraries, and/or the craft of writing itself—which, while sometimes crazy-making, can also be cathartic. Given Oates’s celebrated career, such subtext is a wondrous thing indeed.

The anthology is marred by a few stylistic shortcomings. While I consider myself a fan of the author’s liberal use of parentheses, what tantalizes in moderate measure can become tedious when those works are later read in rapid succession—a revelation that is readily apparent here. Oates also refers to characters in three of the stories through the use of a single letter followed by an underscore (for example, the aforementioned N___ in “The Experimental Subject”); despite authorial intent, the overall effect is diminished by repetition. Both points are minor and more a matter of presentation than purpose, but they’re ones that aren’t easily ignored.

Ultimately, however, Night-Gaunts is another vehicle that showcases Oates’s expansive storytelling ambitions, not to mention the seemingly boundless breadth of her talents. Though united by tone and temperament, each piece succeeds singularly even as the totality of the work (mostly) exceeds the sum of its parts. Readers can expect a few sleepless, contemplative nights due largely to the author’s exploration of the things that collectively haunt us—not the least of which is this: the human condition.