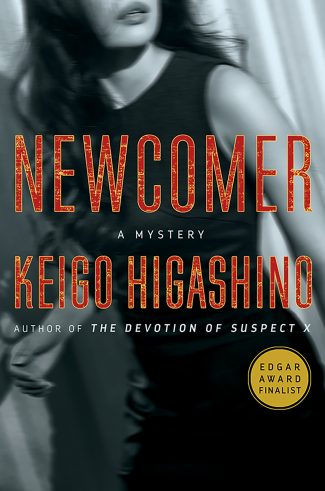 In his masterpiece Life: A User’s Manual, Georges Perec takes his reader room by room to discover the lives of people in a single apartment building. Imagine a variation of this pattern, introduce a Columbo-like detective, add a hint of the game Clue/Cluedo, and you have Newcomer in a nutshell.

Kaga is assigned to investigate the murder of a woman living by herself in a business district apartment. Nothing too out of the ordinary so far―but Higashino devises an original structure for his mystery: his chapters are seemingly peripheral vignettes focusing on different shops in the district, which Kaga visits in order to interrogate potential suspects. Is Kaga just having fun getting to know the area? Or could all these shop owners and their apprentices all be pieces of the same puzzle and be involved in the murder of Mineko, akin to Murder on the Orient Express?

Along the way, the detective―and the reader along with him―slowly begins to understand how these people are all connected. Potential clues pile up in front of him, like snack cakes, wasabi, chopsticks, kitchens scissors, a wooden top toy, and a shrine―and the reader is slowly led to the core of the story.

I really enjoy Higashino’s smart plotting in his previous works like The Devotion of Suspect X and Malice. Newcomer is just as clever, with the structure itself leading to so many red herrings.

At the outset of the book, Higashino offers a list of characters from each shop―very helpful, especially for readers who might not be accustomed to Japanese names.

Kaga’s character (in equal parts humorous, wise, and humane) and methods remind me of Columbo―the best detective around who hides behind eccentric looks, uncharacteristic clothing, and unusual techniques. These traits do not always make blending in an easy task:

“Are you keeping our store under surveillance?”
“Come off it. Like I said, I’m not watching anyone.”
“What are you doing then?”
“Nothing. Or if you insist, I’m just enjoying this iced coffee—slacking off, in other words.”
Ignoring the straw, Kaga tipped his ice coffee down his throat.
“Is Mr. Takura a suspect in the Kodenmacho murder case?”
Kaga’s face tensed. He glanced around at the other tables.
“I’d be grateful if you could keep your voice down.”
“Give me an answer or I’ll turn the volume up to eleven.”
Kaga sighed and ran his fingers through his shaggy hair.

However, his methods can be laser-focused and effective in the right circumstances:

Kaga was silently gazing off into the middle distance. Shuhei wondered if he was drawing himself a mental picture . After a while, the detective looked at Shuhei and grinned.
“Of course you did. Polishing off a nice snack in secret is quite a challenge.”
“Have we finished here?”
“Sure, I didn’t mean to keep you,” said Kaga, raising the hand in which he held his chopsticks. “One last thing before you go. The last set of fingerprints on the container wasn’t a match with yours.”
Shuhei’s eyes nearly popped out of his head. “My fingerprints? But how . . . when . . . ?”
“Oh, we have our little tricks.”
Kaga’s grin stretched from ear to ear.

Kaga is not the only one with deceiving looks, and the theme of identity (wrong identities, secret identities) is central throughout the book. And who is the newcomer referred to in the title?

I also appreciated the pacing of Newcomer, as its pleasantly ambling plot gives the reader time to become familiar with the various shops in the business district, the many people involved in their operation, and various elements of Japanese culture.  And the work of translator Giles Murray must be noted, as well. Not knowing Japanese, I obviously cannot compare the English version with the original text, but the narrative and dialogue have a beautiful flow, all signs of a successful translation.

Another cleverly plotted, beautifully structured mystery by the Japanese master of the genre. I highly recommend Newcomer for all lovers of smart stories, and readers interested in diverse and international literature.

Check out our visual guide to Newcomer!