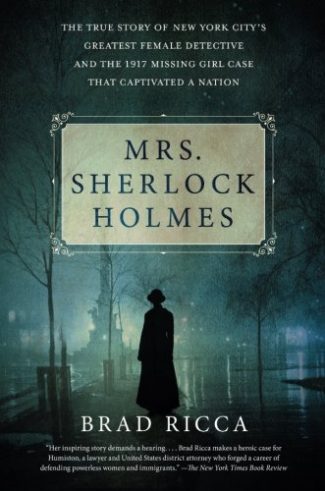 Mrs. Sherlock Holmes: The True Story of New York City’s Greatest Female Detective and the 1917 Missing Girl Case That Captivated a Nation by Brad Ricca is the shocking and amazing true story of the first female U.S. District Attorney and traveling detective who found missing 18-year-old Ruth Cruger when the entire NYPD had given up.

Grace Humiston is perhaps one of our nation’s greatest unsung heroes. A female lawyer and detective who would go on to become the first female US district attorney, she was pushing the boundaries of what women were capable of before women were allowed to even vote in this country. Brad Ricca’s account of Humiston in his Edgar-nominated work, Mrs. Sherlock Holmes, pulls together an incredible amount of research into a captivating narrative of her life’s work that reads more like a Victorian crime novel than a work of true crime.

This book mainly centers mainly on the case of the missing 18-year-old, Ruth Cruger. The year is 1917, and we’re in the mean streets of New York City. Ricca captures the atmosphere and emotion surrounding the family perfectly.

There were so many occupied places here, known and not, all throughout the city. Parents and children and dogs and babies seemed to fill every invisible corner, pushing out against the city’s uneven seams. As the afternoon sank into night, Henry made his way home. He paused at the stairs of his own building, his eyes drawn downward to the closed cellar door. He descended the steps down and entered the basement. He looked tensely into every black corner, where the wall met each other in shadow. He could almost hear his heart beating, the sound reverberating against cool walls.

Ruth’s father, Henry, was particularly frantic to find his daughter as word got out to the newspapers and wild speculation began about what might have happened to her. Meanwhile, pieced together throughout Ruth’s story is Grace’s, the nature of her personality and her first forays into the legal profession as she learned strategies that suited her analytical mind. Strategies that lent themselves perfectly toward detection as well as legal argument.

Grace began her work in legal aid, but she quickly decided to open her own firm in June of 1905. Her sole purpose was in helping poor immigrants get the legal help they needed. She was down to earth, overcoming language barriers by interpreting the law in plain English, saving time and money. She was known throughout the city as a reliable source for good, honest help.

Detectives at the Fourth Branch of the New York City Police Department were having no luck finding Ruth. Eyewitnesses came forward with clues, but no one could locate the missing girl or the mysterious man she was seen with just before she disappeared. In the early 20th century, people, especially women, disappeared all the time in New York City. In 1914, Ricca says, 4,035 people were reported missing. Though most of them were found, there’s still a startling number of women who were not. White slavery, or human trafficking as we call it today, was a serious and very real fear back then. Many speculated that this is what happened to Ruth Cruger. That mystery man must have drugged her and stolen her away into a life of prostitution. It’s rather astonishing to consider this very modern crime happening back then.

The narrative of the book jumps back and forth in time, sometimes focusing on Grace’s origin story then back again to the case of the missing girl. It’s not until a good portion of the way into the book that we see Grace enter the picture of the Ruth Cruger case. At this point, the police had all but given up, convinced that Ruth had simply run away from home to elope with a boyfriend of which Ruth’s father might have disapproved. Grace and her partner in detection, Julius J. Kron, went to extraordinary lengths to uncover the mystery of what happened to Ruth, going undercover to infiltrate possible Sicilian criminal organizations.

Ricca highlights just how important it was to have a female lawyer and detective investigate this particular case. In fact, Grace uncovered a lot of crime done against women that were either ignored by the police or never even considered because they assumed things like elopement or leaving voluntarily because of strict parents.

“Why couldn’t the police have found the same thing?” someone asked.

“I don’t know,” was Grace’s reply. “I don’t know why the didn’t. Something told me to keep on digging and I just couldn’t stop, although they told me that I was foolish. I was told that there might be a civil suit. I was not to be dissuaded by that.

“You put two and two together,” Grace said simply. “That is, you do if you are a woman. If you are a man you don’t, or you get the addition wrong.”

The story of Grace Humiston and all that she managed to accomplish in a time that expected women to stay silent and compliant and pretty much hidden away as far as society was concerned is remarkable. The case of Ruth Cruger is equally important, and pretty telling, for how women were considered by society back then. How many crimes of that sort were committed and never solved simply because men weren’t taking women seriously then? And this lack of listening to women persists to this day. 1917 saw shades of what women are protesting in the #metoo movement of today. Women afraid to speak up. Women suffering needlessly because no one is listening.

Grace Humiston was listening, and she wasn’t taking no for an answer. Women like Grace help keep the silence at bay and gave a voice to the oppressed. Her story is one that must be told. And a lesson that we can still learn from today as these same issues, which have persisted for the last hundred years or more, continue. And thanks to Brad Ricca, we have one comprehensively researched and captivating look at what is possibly one of the most important moments in women’s rights within the legal system of the United States.