Review: MI5 and Me by Charlotte Bingham 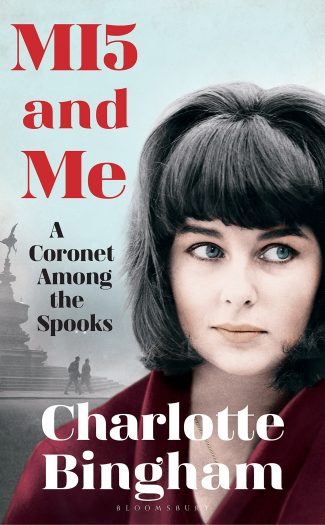 MI5 and Me by Charlotte Bingham is a beguiling comic memoir about a young woman who discovers her father is a spy (and was the model for John le Carré’s George Smiley) and goes to work as a secretary in 1950s MI5.

This effervescent memoir follows the rather unworldly 18-year-old Lottie as she comes of age in 1950s London, surrounded by spies. This unusual situation is due in large part to her father, a member of MI5 who was an inspiration for John le Carré’s most famed fictional creation, George Smiley. Lottie’s father has always seemed somewhat terrifying to her—but in a very English upper-class sort of way. Remote and prone to icy gazes and awful silences, one of his greatest fears is that his daughter will prove to be a “lightweight.” And so he calls her into his study one rainy day, and after several long pauses and slowly spoken preambles:

He returned his gaze to me. I had abandoned my young and innocent expression and swapped it in for startled daughter.

‘What do you mean “oh, dear”?’ he asked in an even more chilly tone.

Lottie is very much a product of her time and class, with decided ideas of what is nice and what is beyond the pale. Even as she’s adjusting to the idea that her very own father—whom she thought held some banal job in the War Office—is actually a spy, she’s informed that he’s arranged for her to work in the typing pool at MI5. Her quiet efforts to undermine this—from trying to catch pneumonia to handing in a truly appalling application form—come to naught. Soon, poor Lottie is gainfully employed in what is known as The Section and thrust at the mercy of a woman known as The Dragon for her ability to break new secretaries.

Fortunately, Lottie finds an ally in Arabella, another member of the typing pool who soon becomes her mentor and best friend. Even so, Lottie knows that her unique position—as both her father’s daughter and as a typist who sees much of the information that flows through The Section—means that there are still many things she’s not allowed to discuss with anyone, even fellow employees. On pain of imprisonment, she often has to guard her tongue even in casual conversation, as here with an associate of her father’s who has come to dinner:

I thought I should distract him with amusing conversation, and I think I managed to, because he laughed a lot, and since I couldn’t tell him I worked at MI5, I told him all about the dreadful jobs I had done up until now, always hoping that he wouldn’t ask the inevitable question.

I stared at him. I would have given a million pounds to say to him ‘I work at MI5’, and see him laugh and not believe me, but since I couldn’t, I said, ‘I work in a typing pool,’ which was true.

‘Someone as amusing as you should not work in a typing pool,’ he said. ‘I—I shall have a word with your father about this.’

‘When you have, let me know and I will help you,’ he said warmly[.]

Lottie’s charm and natural resilience see her through any number of sticky situations as she grows accustomed to her life as a member of MI5, adjusting even to the takeover of her own home as a hotbed for counter-propaganda. Her father has decided to start lodging famous actors he’s recruited as spies, naturally leading to a sequence of events both comical and chaotic. But then, Lottie’s boss at The Section thinks she should go on active service—meaning she’d have to actually spy on someone herself. After all she’s been through and learned, Lottie would be quite enthusiastic … if the target were anyone but Arabella’s glamorous mother.

MI5 and Me is a wonderful romp through 1950s London as seen through the eyes of a young woman who is thrust into the unglamorous work of national security. Her tact and resourcefulness are often tested as she finds herself in one unexpected situation after another, but her sense of humor always emerges unscathed. Of course, there is a healthy dose of obfuscation in this memoir, from important figures being identified only by nicknames to the clearly made up names of some of the actors and artists who show up in these pages. Less a tell-all and more a snapshot of a specific manner and milieu, it is a terrific recounting of an important time in the author’s life that also shines a light on the less exotic side of British espionage.