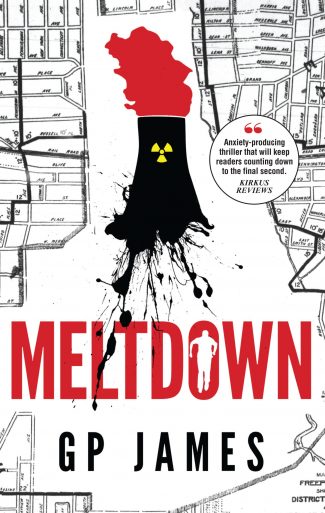 Meltdown by GP James is a timely thriller that illuminates facts regarding the state of the world’s energy crisis, climate change, and the quandary of nuclear energy—inspired by events in Fukushima, unexpected earthquakes across the planet, and the deterioration of nuclear power plants worldwide.

An unheard of 6.4 earthquake hits Peekskill, New York, leaving devastation like this country has never seen before. But it doesn’t end there. One mile away from the epicenter sits Bear Mountain Nuclear Energy Center. The quake has left the reactor with damage—how much is left to be seen, but the cloud of steam leaking from the top of the reactor is ominous. Now, a natural disaster turns into an unnatural race to save the millions of people in the path of the nuclear reactor’s imminent meltdown.

This book is a wild ride of emotion and tension. We follow main character, Trace Crane, as he tries to navigate as a previously content, nearing-middle-age man who is thrown into a hellish landscape for which he is responsible. We live in his thoughts as much as we do his actions, along with his wife, Avi. Trace is stuck in the plant as one thing after another happens to this massive pressure cooker. He is pushed to his limits and beyond, and we see how his spirit takes over when his body is willing to quit. Torn between finding his wife and child—who he hasn’t heard from since the earthquake hit—and trying to keep the nuclear reactor from a meltdown, he is at war within himself. Stay loyal to his oath to protect the public and the plant, or stay loyal to his marriage and family? It’s not an easy answer for Trace.

I am a child of the late-70s and 80s, so nuclear energy—and war for that matter—was a part of my childhood. It was much talked about and heavily debated at times. Being a kid, there was much adult speak on this topic, which left it a kind of mysterious and scary subject. The author, GP James, has definitely done a lot of research on nuclear reactors and the nuclear power industry, and it shows. There are various diagrams of the facility and the reactors along the way, as well as maps to help illustrate the path the radiation will take, making it a more realistic tale that can be uncomfortable at times. I was nervous more than once, and my mind couldn’t help but wonder if this is somewhat near to how a disaster of this magnitude would actually go down.

James captures the desperate atmosphere of a disaster and puts the reader right in the middle of it—whether it’s on the inside of the plant with Trace or on the outside where all hell breaks loose, with Avi trying to navigate a hellish landscape to find her missing child.

“We’re getting reports in that several overpasses, bridges, and highways have collapsed and’ve been compromised. The nine, six, eighty-seven, eighty-four. A section has fallen out of the Bear Mountain Bridge and at least two vehicles have been reported to have careened off into the Hudson. There are reports of people stuck in elevators, others trapped under rubble calling loved ones to come help them. We see people running and screaming in the streets – many bloody, those that can walk are carrying and helping others. Some emergency vehicles are beginning to show up outside. It’s just awful. A woman is holding her child, both are bloody. The boy looks unresponsive. People are covered in dust and debris. Sirens are blaring everywhere.”

As the story unfolds, we first see Trace defending nuclear energy and remembering the many fights he and his wife have had about the subject. Early on, after the earthquake, it becomes apparent that the powers that be haven’t exactly kept up the maintenance on the facility, leaving Trace in a tight position trying to save it all.

Trace gawked at the TV. Residents’ perspectives from the outside chilled him. He hated himself for being part of an event that spread fear through his community. He felt like a razor-toothed Santa Claus that baited children with candy canes before kidnapping them. A job that had been about supporting society with electricity was now feeling shameful. He didn’t want anyone to be scared by the plant. He wished the public was more educated about nuclear energy; he thought it would abate their fear. Dealing with the system was daunting, but Trace believed in his team, their safety systems, and protocol. It’s my duty to restore serenity to my community. Trace was confident they would mitigate the reactor issues. It just takes time.

The story goes back and forth between Trace and Avi dealing with their own emergencies. Avi is injured and trying to find their four-year-old daughter, Brooklyn. With the roads a mess, not knowing where to turn, Avi struggles to piece together where her daughter might have been taken. The desperation of the survivors as the days go by turns ugly. People are fighting for food and water, trying any way they can to get away from Bear Mountain.

James seems to capture the increasing intensity of how fear and panic spread. When people are not knowledgeable about a subject, it is easy to fall into fear, and disinformation does not help.

Reading this brought some of my own fears from my childhood back to the surface. Nuclear war was such a big threat that weighed heavily on everybody’s minds back then, and having just had a recent brush brought back memories and feelings for me. This story put some of my fears on the page.

Well-written, with great characters and a strong storyline—all work together to keep readers hooked to see what will happen. The perfect summer read!