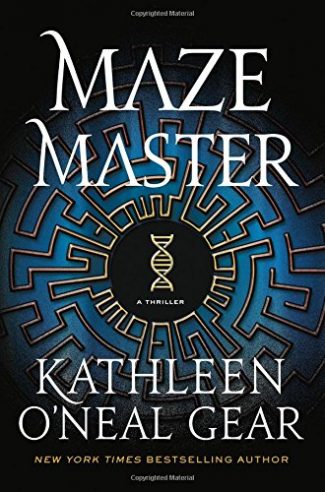 Kathleen O’Neal Gear’s Maze Master walks a fine line between a fast-paced action/adventure narrative and the kind of cerebral, well-researched novel that demands to be called smart and challenging. An epic tale in terms of scope, geography, scientific research, and consequences, this novel takes readers to a plethora of places across the history of humankind while dealing with an apocalypse that could very well be hiding in our DNA at this very moment.

Maze Master’s plot is the type that can’t easily be turned into an all-encompassing synopsis. At its heart is LucentB, a lethal retrovirus that has been hiding in our DNA for ages and is now—for some reason—an apocalypse in the works. A geneticist names James Hakari knew it was coming and tried his best to warn the US government about it, but no one listened. Now, they are looking for him, but he has vanished.

Anna Asher, a brilliant former student who may have feelings for Hakari that go beyond those of a student-professor relationship, is given the task of finding him. To do so—and to find something that could prevent the looming catastrophe—she recruits Dr. Martin Nadai, a paleographer and world-renowned religious studies scholar. Together, they travel to Egypt in search of a solution of biblical proportions, and in the process, they enter a maze of ideas and clues left by Hakari.

Meanwhile, the military is doing whatever they can to figure out the mess they have on their hands, and what they are dealing with is something the best scientists at their disposal are only barely beginning to comprehend. Packed with action, traveling, science, death on a global scale, and history, what follows is a tense thriller with apocalyptic tones that has something to offer fans of history, thrillers, science, and even horror fiction.

LucentB, the retrovirus causing all the havoc at the epicenter of Maze Master, is based on a real retrovirus we currently carry inside us, research, and have to deal with: HERV-K. HERV-K has been responsible for several plagues over the past 75,000 years and is responsible for pushing Neanderthals to the edge of extinction 50,000 years ago. In Maze Master, O’Neal Gear explores the possibilities of this retrovirus while showing some of the recent research on it and what it suggests. The result is a novel that often seems to exist perched on the dividing line between fact and fiction, and that makes it much more creepy and scary.

What exactly is the retrovirus capable of? What triggers its mutation? How would we deal with a bad outcome to those two questions? Scientific and archaeological authenticity as well as outstanding research give this narrative an edge, an undeniable feeling of plausibility that serves as a magnifying glass for the suspense and fretfulness that permeate the story.

Writing about complicated topics like this is always tricky. On one hand, information has to be satisfactorily conveyed to every reader in layman’s terms. On the other, minimizing or oversimplifying subjects and explanations can lead to a lack of authenticity, compromise suspension of disbelief, and make the expert characters sound a tad ignorant. In Maze Master, the author successfully steers clear of all three and manages to deliver all the information without having to bog down the narrative with long information dumps. This is done mostly by having practically everything explained (and sometimes repeated in a different, simpler way for the benefit of a character) within the context of dialogue.

One of the novel’s accomplishments is its juggling of atmospheres and speeds. Sometimes scientists are in a lab, discussing possibilities, and everything belongs to the world of words and ideas. Other times, O’Neal Gear throws readers headfirst into the tumultuous and dangerous realm of war and the prose goes with it:

The goat trail curved through the lime green haze, hugging the base of the sand ridge. As they got closer to Bir Bashan, bodies begin to appear. Micah frowned at them. Identifying and treating battlefield wounds was part of his training, but he didn’t understand any of this. As he trotted by five men who’d been reduced to bones, he frowned. Even in an environment like this, it took time to skeletonize human bodies. Days. Was it possible that the latrine smell could melt flesh from bone in a matter of hours?

The second accomplishment of Maze Master that deserves attention is the way the author visits an array of countries and places, discusses the history of Humans, Neanderthals, and Denisovans, and even offers a masterclass on DNA while never losing sight of what makes us human and exploring the way we deal with things that might be too big, cruel, or unfathomable for our minds to easily digest:

The soft sound of rain pattering against the windowpanes filled the stone room. Just like in combat situations, the human brain attempted to cope with epic tragedies as best it knew how. Unimaginable defense mechanisms kicked in as the individual struggled to deny conclusions that forced themselves upon the conscious mind. It took time to sort them out. Especially when the magnitude of the tragedy was almost inconceivable.

Maze Master is a cerebral apocalyptic thriller that delves deep into science and religion as well human history and the possibilities of the hidden remnants of DNA that live inside us. Accomplishing all of this results in somewhat of a challenging read in the sense that it requires engagement in order to be fully appreciated. There are explosions of action, long discussions between brilliant individuals trying to figure out how to stop the end of humanity, and even passages in which impossible things found in the Bible seem to step out of history to walk the earth and test the sanity of the characters. That is a lot for a book that comes in just under 400 pages, but careful reading pays off, and those who take the time to read and engage will be rewarded with a superb apocalyptic thriller that will surely be on many lists at the end of the year.

Read an excerpt from Maze Master!