Review: Maigret and the Headless Corpse by Georges Simenon 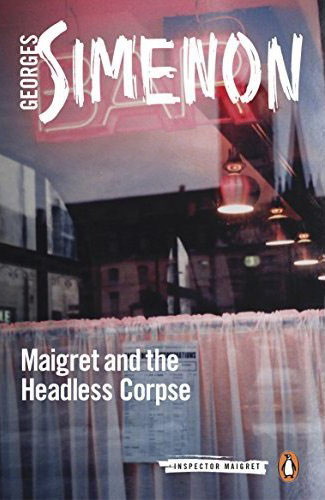 Maigret and the Headless Corpse

Maigret and the Headless Corpse by Georges Simenon is the 47th book in the Maigret series, where a man’s dismembered body is found in a canal and only Maigret can uncover the killer.

Maigret and the Headless Corpse was the 47th mystery Georges Simenon wrote about the Chief Superintendent of the Paris Police, and it might be my favorite book in the whole Maigret canon. It’s this book, more than any other, that made me a fan. Like the best Maigret mysteries, it is a book that somehow manages to combine hard realities with gentle charms. It’s not a cozy. It’s too rough around the edges for that. The characters are too dark, the crime too gruesome. Yet it’s a book more about humanity than about crime, more about people than “criminals.”

First, though, about that crime: The book opens with the pilot of a barge in the Saint-Martin Canal discovering a human arm jammed in his ship’s propeller. Police drag the water and discover more pieces of a man, bundled and sunk into the water. They manage to piece together the body, all except for the head.

Maigret is called in and begins his investigation in the nearby neighborhood of Quai de Valmy. It has a mean reputation. (This headless corpse isn’t the first body that’s been dumped in the canal.) Soon, his search leads him to the deserted Calas bistro:

The ceiling was low and blackened with smoke, and the walls were grimy. Indeed, the whole place was murky, except for faint patches of sunlight here and there. It was like a church lit only by stained-glass windows.

The place is run by Madame Calas. She is “thin, sullen-faced, neither young nor old, perhaps in her early or middle forties.” She has no affect, no personality at all really, and serves the policeman with an almost rude indifference. Observer of people that Maigret is, he’s fascinated by her. He takes in her little world, observes her with her regular customers, notices the cat that warms itself by the stove. He learns that she is married, that her husband is away.

The question, of course, is whether or not Monsieur Calas is the one who lost his head. Simenon’s plotting keeps us turning pages, but this isn’t really a book about plot. The best Maigret mysteries, in fact, are rarely about plot. Newcomers to the Maigret series will either love this quality of the books, I think, or be put off by it.

What the book is really about is Maigret trying to figure out sad Madame Calas. How did she end up here? What is her life? Who is she?

One moment, about a third of the way through the book, captures the character of Maigret and encapsulates his approach to his job (and in doing so, captures the real appeal of the series):

He was intensely interested in her, more so than in anyone he had met for a very long time.

Had he not in his youth dreamed of an ideal vocation for himself, a vocation that did not exist in real life? He had never told anyone, never even given it a name, but he knew now what it was he had wanted to be: a guide to the lost.

The solution here, as it so often is, is buried in the past. It doesn’t excuse things, but it explains them.

Where does Maigret fit? What tradition do we place him in? He is neither an errant knight like Philip Marlowe nor an avenging he-man like Mike Hammer, neither a human computer like Sherlock Holmes nor a pompous prima donna like Hercule Poirot. He is, wonderfully enough, Maigret.

He’s an astute observer of human folly. I think it was Roger Ebert—a big fan of both Simenon and Maigret—who compared the Chief Superintendent to the sad angels watching humanity in Wings of Desire. It’s a good comparison because Maigret is powerless to stop people from making their mistakes. By the time he arrives, in fact, most of the mistakes have already been made. He can’t offer absolution or forgiveness, only some degree of understanding.

There is an existential current running through Simenon’s work. In his roman durs like Dirty Snow or The Man Who Watched Trains Go By, this current is as mighty as a river. The Maigret books have a gentler core because they have a good man, Maigret, at their center. Yet these books are dark in their own way.

Read Maigret and the Headless Corpse and see if you know what I mean. Sure, Maigret solves the mystery and catches the killer, but the book isn’t about good overcoming evil. It’s about how the real mysteries are people themselves.

Jake Hinkson is the author of several books, including the novel No Tomorrow and the essay collection The Blind Alley: Exploring Film Noir's Forgotten Corners.