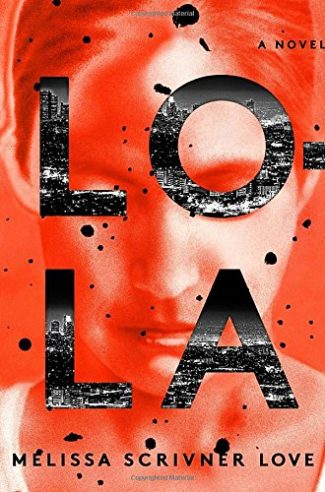 Lola by Melissa Scrivner Love is an astonishing debut crime thriller about an unforgettable woman who combines the genius and ferocity of Lisbeth Salander with the ruthless ambition of Walter White.

Melissa Scrivner Love has written an absolutely remarkable and completely unforgettable heroine in Lola, the titular character of Love’s debut thriller. It should come as no surprise—given Love’s accomplishments in screenwriting for television shows like Life, CSI: Miami, and Person of Interest—that this novel is well-paced, expertly plotted, and cinematic in scope. There is nothing predictable here, as Lola fights for a place in the male-dominated gang culture of South Central LA.

There are only five living members of the Crenshaw Six, a new gang fighting for territory and respect. Pretty soon, they’ve caught the eye of a major drug cartel and are tasked with stealing from a rival cartel in order to prove their worth. We discover that Garcia, the gang’s supposed leader, is a front for the real leader of the Six—Lola. She’s a smart, inventive woman who has figured out how to lead a gang and gain respect for them not by using brute force, but by using cunning and men’s assumptions about a woman’s place in this society. She can go more places, hear more things, and spy on her rivals because they all have made the mistake of underestimating her. It’s brilliant.

Lola has come to Freddy’s before with her crew, a seeming fifth wheel to Garcia, Hector, Jorge, and Marcos. She had stayed quiet while the men talked too loud. She had eaten migas while they told tales of conquests Lola knew were bullshit. Funny, how the diner patrons had seen the men as a threat. Lola wonders how talking the most and the loudest became the cue to the outside world that you were the leader.

Lola’s gang soon finds themselves in hot water, however, when Hector—Lola’s little brother—make a mistake that turns deadly. Now, both cartels want them dead, and Lola is doing everything she can to save her gang and herself. There’s a beautiful twist here, though, as Lola has often prepared herself for death—not exactly giving up—but knowing she’s been outmaneuvered by her enemies, she eventually discovers a reason to live and to fight. It’s a powerful story of redemption, sacrifice, and family for someone who has only relied on herself for so long.

Love’s power over words and storytelling is astonishing. It’s a gritty thriller, and her staccato style of writing kept me turning pages well into the night. Her descriptions, always from Lola’s point of view, illuminate Lola’s world:

All Lola can see is the woman’s back—she’s blond, with the bob haircut, khaki Capri pants, and pastel cardigan of a smiling mother in a Swiffer commercial. She wears a diamond the size of a bullet on her left ring finger.

This description, a mere two sentences of observation, tells us so much about Lola’s life. She comes from somewhere where mothers don’t dress like this—where her best comparison of size is to a bullet. She’s the epitome of South Central gang life, through and through.

“What?” Lola squints in the sunshine. Her right eye is swollen shut, but she can tell it’s another banner day in Los Angeles—seventy-five, sunny, not a single cloud in the sky. Even here in Huntington Park, where drive-bys leave little bodies bleeding out on cracked sidewalks, the sky smiles down like it doesn’t have a fucking care in the world.

Melissa Scrivner Love’s debut, Lola, knocks it out of the park with its harsh and honest portrayal of a strong woman making her way in a very hard world. I would argue that this will be one of the best crime novels of the year, hands down, and I definitely can’t wait to see what’s next from this author.